I have to admit that I’ve never been much of a goal-setter, preferring to chase progress, learning and opportunities. Setting such a specific goal as part of the Vox Performance Project – my 1000 watt target – was a bit of an anomaly for me. But, since my last blog I’ve made some steady progress towards that goal, taken some detours, surprised myself and grown in confidence for the season to come. And, while that one key goal for the project is still out of reach, I’m starting to feel like it isn’t confined to the realm of dreams.

Prioritising making time to get out skiing on the slopes near my home in Valais, I’ve only averaged about 5 hours a week on the bike over the last two months – a very, very modest amount for anyone who claims to be training. Most of that has been on Zwift, with the odd ride outside when the sun, temperatures and lack of icy roads have combined to allow it. So I’ve been a bit surprised that even at this level of time commitment, I’ve started seeing the benefits. 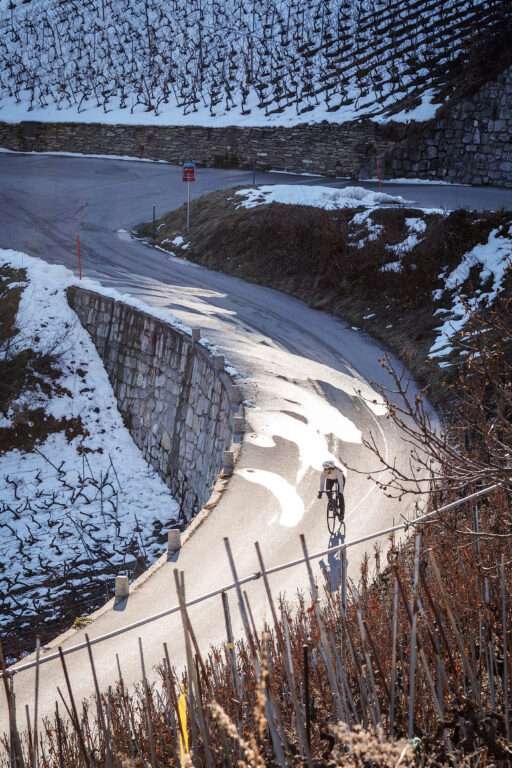 Training-wise I’ve been focused on developing top-end power and sprint capacity. And, to be honest, on just rebuilding a regular routine of structured training with some intensity. With a relatively light training load, I’ve also been making sure that I’m getting the most out of every session – it just doesn’t make sense to have any half-hearted sessions in a 5 hour training week! That doesn’t mean going full-gas every session, but it does mean making sure I’m going in properly fueled, hydrating throughout and ensuring I’m getting the right nutrients in at the right time to support recovery. And, of course, prioritising my sleep. Getting right into the project, and wanting to learn as much as I can about my body and how I perform during these six months, I also have a very nerdy spreadsheet where I’m tracking and learning from all my daily data points, from training and nutrition to sleep, mood and menstrual cycle. I’m hoping that setting these habits in place now, while my training is still light, will mean they seem natural as the season progresses and my time on the bike ramps up.

Tracking my glucose levels with Supersapiens during the initial foreign-feeling sprint-focused interval sessions, I noticed that I was barely touching the so-called performance-zone, a name which describes an elevated range that your glucose levels sit within when you’re working hard, feeling good and have adequate glucose available to fuel your efforts. After a few years of mainly doing long, lower-intensity climbs in the mountains, it felt like I was having to re-teach my body how to hit higher intensities that required glucose for fueling. But soon enough, as my power outputs rose and I realised the importance of a good warm up from a metabolic perspective, I was hitting higher glucose levels – my body was using it for fuel again, and the efforts began to feel more achievable. As I continued with these short intervals, I was interested to see the patterns from the sensor readings moving up and down in sync with the intensity – with the glucose readings almost mapping my heart rate graph for a given session. 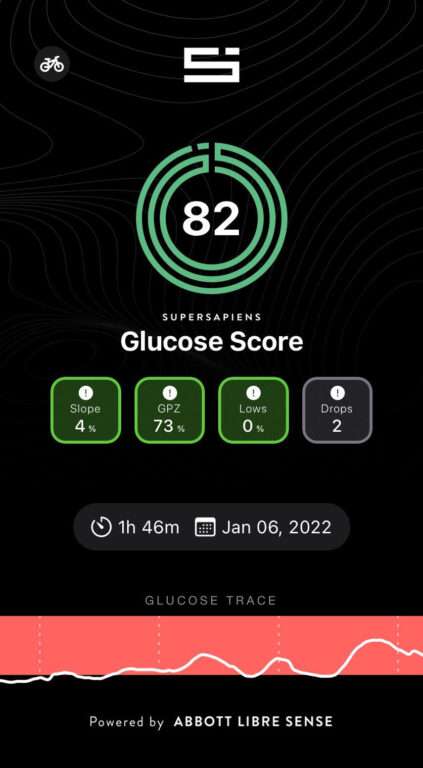 Once I had my fueling and performance zone dialled in, I started seeing performance gains. My peak sprint power numbers started ticking up, and although I’m still a wee way off the 1000 watts target, I’m now regularly able to hit peak powers on the trainer in the high 800s, and more excitingly at the same watts per kg as I was doing at my previous peak on the road back in 2018, when I was a little heavier and not at 800m above sea level! It’s been fun to see – but of course it just makes me hungry for more.

Inspired by other women in the Performance Project, and looking for other ways to put my progress to the test – I joined the recently formed Rocacorba Collective and started Zwift racing on a Tuesday night with another amazing group of women. If structured training reminded my body that it can hit higher power and use glucose to fuel those efforts, Zwift racing has reminded my legs what lactate feels like, and pushed my mental fortitude to the limits! 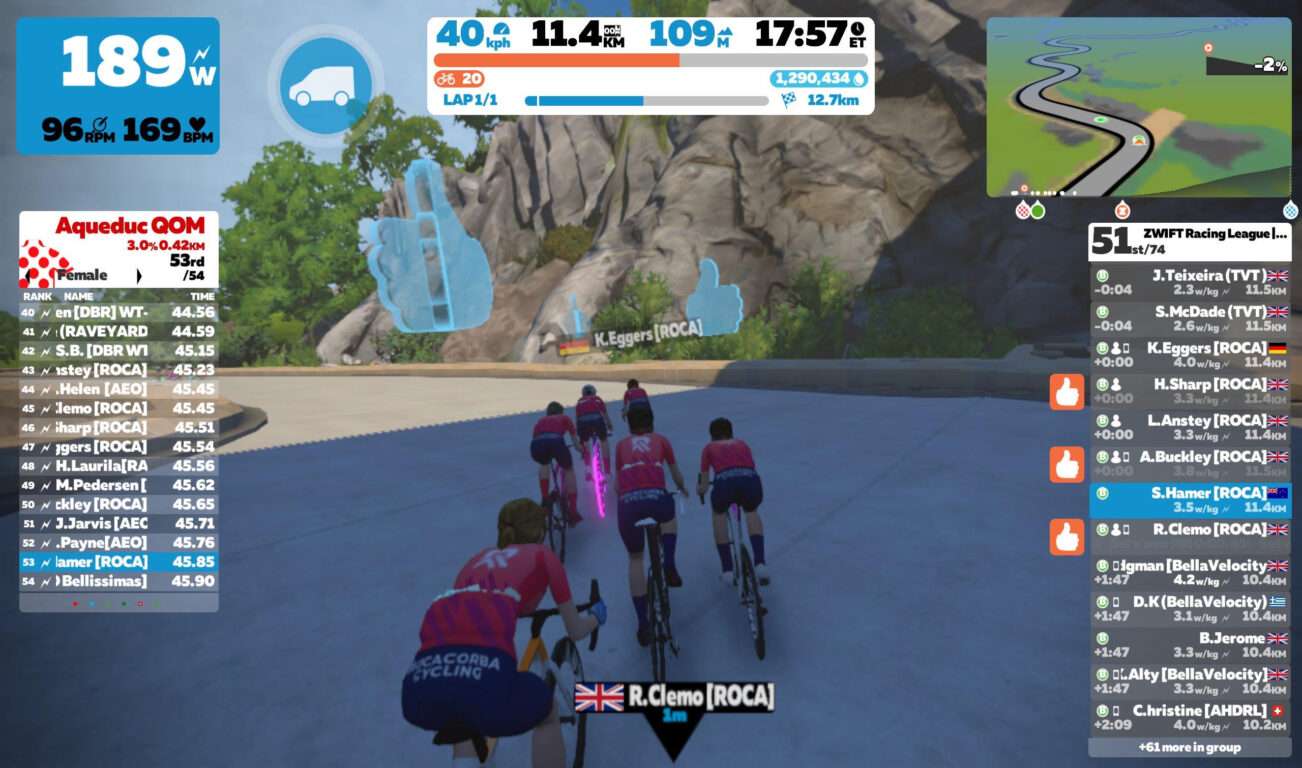 These high intensity, evening races mean that preparation is key. After some planned and unplanned experimentation, I’ve found I feel best after a light, early dinner around 3 hours before the race start, then topping up with half a gel (Precision Fuel & Hydration of course!) during my warm up, saving the other half until mid-race. Mindful of how sweaty indoor racing can get, I’ve been making sure to pre-load my hydration by drinking PH1500 about an hour or so before the race begins, following up with the natural PH500 with 17g of sugar in my bottle for the race itself. Despite all the preparation, and feeling pretty good during the races, I’ve learnt the hard way that being able to hit peak powers with fresh legs is one thing, but being able to use my sprint mid-way through or at the end of a race is another type of fitness altogether! So – new goals are forming.

Finally, it was on my few rides outdoors – where I have little choice but to enjoy the long local climbs – that I was first surprised to see some more evidence of my training: at tempo pace over a 20-40 minute climb, my heart rate was suddenly looking significantly lower than I have ever seen it before, even compared to when I’ve had a higher FTP, for the same power levels and RPE. I can’t tell whether it’s hydrating properly, dialling in my ride and recovery nutrition or just getting some structured training in that’s had the biggest effect – but for now, while I’m seeing improvement, I’ll keep doing what I’m doing. Without focusing on aerobic endurance or threshold power at all, it’s been exciting to see improvements in these areas too.

Now, at the halfway point in the Performance Project, I find myself looking beyond my original goal of hitting 1000 watts and developing longer-term goals. I’m excited about continuing to learn about my body, enjoying the process of building fitness, and becoming as generally healthy and strong as I can be. Even though the project is only 6 months long, I feel like using this time to focus in and learn about how my body works is setting me up for much longer term success. Performing isn’t just about races or peak power goals – it’s about being physically and mentally able to do what you love to the best of your ability on a daily basis. The confidence that comes from knowing myself and understanding my body is something that this project is teaching me that I’ve somehow never felt before.