The finale of the 2021 WorldTour is upon us as Ronde van Drenthe draws the top tier of racing to a close 7 months after Strade Bianche.

Starting in the region’s capital, Assen,  the 14th edition of the race will see the peloton tackle 158km on the demanding roads of Drenthe.

Winding through the northeastern region of the Netherlands the route comprises 10 cobblestone sectors and the marquee climb – the VAMberg. The so-called ‘rubbish dump climb’, the VAMberg, is a man-made hill on top of a landfill. Whilst short – just a mere 400m long – it’s narrow, steep in sections (with gradients nudging the high teens) and paved with cobbles near the top. It’s no Mur de Huy but it’s certainly enough to splinter the bunch and gap riders. 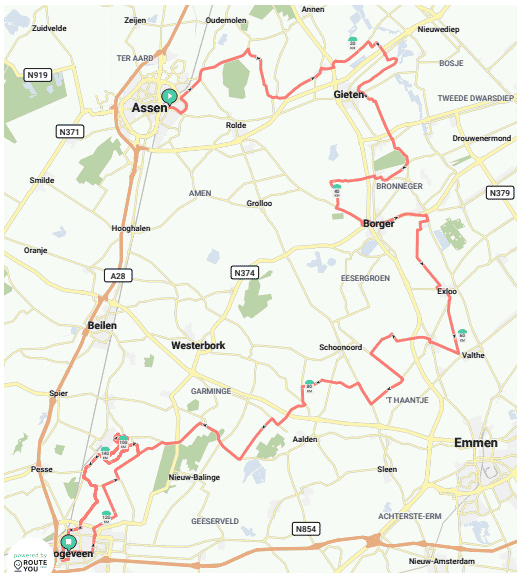 Leaving Assen the peloton will cover just shy of 100km before the first of 4 ascents of the VAMberg. The VAMberg may be the headline act, but the 10 cobblestone sectors enroute to the climb will likely whittle down the bunch and provide the stage for the opening salvos.

Drenthe’s sectors are typically old forest maintenance roads through the region’s woods so the cobbles, or flinten as they are locally known, are coated with a slippery veneer of moss and are very uneven. Their unrelenting nature coupled with the chance of strong winds will make for aggressive and hard racing.

The final 60km of the race sees the bunch tackle the VAMberg 4 times in a series of loops around the finishing town of Hoogeveen. Expect to see a flurry of attacks as riders attempt to distance their rivals and gap the peloton’s sprinters. Cresting the VAMberg for the final time, just 14.5km remain so a thrilling run in to the finish line should be in store.

From the cobbles to the VAMberg, Drenthe is a race that is always ridden aggressively, and can just as easily end with a solo break or a small group of riders contesting the win. It will be an unpredictable and exciting race of attrition where only the strongest will triumph.

The course lends itself to the sprinters who can handle themselves on a climb – although a climber can sometimes get away like Lizzie Deignan (then Armitstead) did back in 2014. Generally, however, it is the fast finishers who thrive in Drenthe such as defending champion Marta Bastianelli (Alé BTC Ljubljana).

Donning number 1, the Italian will be looking to repeat her winning performance of 2019 where she powered to victory in a three-up sprint against Chantal van den Broek-Blaak and Ellen van Dijk. Having won a stage of the Women’s Tour a few weeks ago, Bastianelli is clearly in good shape and is metaphorically at home on parcours such as Drenthe. In what will be her team’s final ever race before the UAE Team Emirates takeover, the classicist will be motivated to clinch the win.

With 6 top 10s to her name as well as a win in 2016, Chantal van den Broek-Blaak (SD Worx) has a great track record at Drenthe. After being pipped to the win in 2019, she’ll be hoping to go one better this Saturday and finish her career with a befitting swansong victory. Teammate and winner in 2018, Amy Pieters, thrives in the Benelux Classics and will also be a rider to watch. Pieters is likely to race aggressively and will most likely look for opportunities to attack on the finishing loop, potentially using the VAMberg as a launchpad.

Compatriot Lorena Wiebes (Team DSM) returns to racing on home soil after a dominant display of sprinting prowess at the Women’s Tour.  The 22 year old from Mijdrecht took 2 stage victories as well as the points jersey on the roads of England so with confidence high she’ll be looking to continue her run of good form.

Fellow Ducth woman and recently crowned European road and World TT Champion – Ellen van Dijk – will also be a rider to watch. The 34 year old has stood on the Drenthe podium three times in her career, but so far the top spot has eluded her. Can 2021 be her year? Teammate Chloe Hosking is another card for Trek Segafredo to play. The Australian sprinter has had a difficult return to form since suffering from COVID-19 earlier in the year, however, despite the challenges, the 30 year old showed she was back to winning ways over the summer. She’ll be hoping she can hang on to the bunch over the successive climbs so that she has the opportunity to unleash her powerful finishing kick.

Liv Racing’s Belgian sprinter Lotte Kopecky has been riding well this year and will be looking to finish her season on a high.  If the 25 year old double national champion can make it over the VAMberg she’ll be hard to beat in a sprint. Likewise teammate and fellow double national champion Alison Jackon will also be a rider to watch. The Canadian finished 6th in this year’s Flanderian world championships and the atritional nature of the course will play to her strengths.

Team BikeExchange bring a strong squad to Drenthe with Sarah Roy, Teniel Campbell and Janneke Ensing among their roster. Local rider Ensing will be motivated to perform well on home roads and in the final race of her career she would undoubtedly love to sign off with a win.