A rider and fan favourite, The AJ Bell Women’s Tour in Great Britain is upon us. 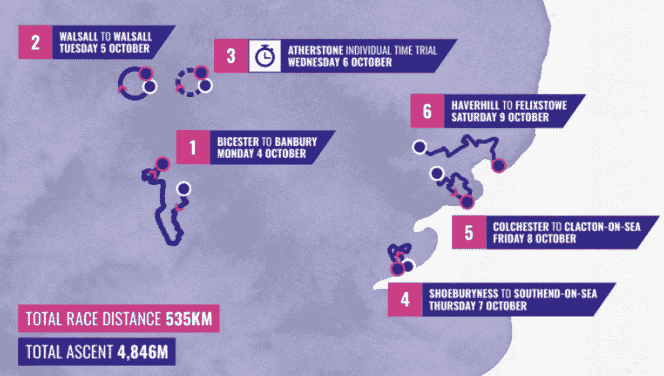 The 7th edition of the Women’s Tour starts on Monday with the 6 days of racing set to provide an exciting and wide-open contest.

The opening stage in Oxfordshire will see riders tackle a lumpy 147.6km from Bicester to Banbury. A 29.4km finishing circuit with a categorised climb and several stinging hills will be raced twice so a fast and aggressive end to the first day of racing is expected.

Stage 2 will be another hard-fought, frenetic affair with a 10 lap kermesse style race in Walsall. The 10km circuit starts in the area’s famous Victorian Park and includes three intermediate sprints at Barr Common (on laps four, six and eight) as well as offering points towards the QoM competition atop the Barr Beacon climb (1.2km) on laps five, seven and nine. After cresting the final ascent of the categorised climb just 6.5 largely downhill kilometers remain, so a thrilling run into the line is likely to be in store.

The following day will see the first ever time trial in the Women’s Tour and it is quintessentially British. The ‘classic 10’ mile race against the clock will see riders tackle on a flat, out-and-back route in North Warwickshire. Newly crowned world time trial champion – Ellen van Dijk (Trek-Segafredo) – is set to race, so the coveted rainbow bands will be showcased on the roads of Atherstone.

Stage four sets off from East Beach, Shoeburyness, then heads out into the rural roads of Essex before reaching the finish line along the seafront in Westcliff near Southend-on-Sea. The 117.5km route is likely to be one for the sprinters however, the potential for some crosswind action and a tough, sharp climb up Hambro Hill 12.7km from the end could set up a nail-biting climax.

The tour moves up the east coast and sees Colchester host the start of the penultimate stage. Leaving the new Northern Gateway Sports Park and finishing in Clacton-on-Sea, the 95.5km race is likely to culminate in a bunch sprint.

The final stage from Haverhill will see riders tackle 155km enroute to another beach side finish at Felixstowe.  A few hills dotted along the course plus the chance of coastal crosswinds could again animate the race and with GC places potentially coming down to seconds we may be in for an exciting finale.

Liv Racing’s sprinter – Lotte Kopecky – will have a great chance of clinching stage victories and if she can ride a solid TT, the Belgian could be in with a shot for the overall win. The 25 year old double national champion has been riding well this year and with her overall victory in the Lotto Belgium Tour in June, a 4th at the Olympics and a stage win at La Vuelta, confidence will be high.

Another Belgian sprinter to watch out for is Jolien d’Hoore (SD Worx). The 31 year old from Ghent was 2nd overall in the 2nd edition of the Women’s Tour back in 2015 and with 5 stage wins to her name she’ll be looking to add more to this tally in 2021. Teammate Amy Pieters also has a great record in this race having won 3 stages over the past few years and finishing 3rd overall in 2019. The Dutch woman thrives on the aggressive racing that has come to characterise the tour so expect to see her animating affairs.

Home favourite Lizzie Deignan (Trek-Segafredo) became the first two-time champion of the tour when she took victory in 2019. The defending champion will find it hard to retain her crown given the parcour of this year’s edition, but expect to see the Yorkshire woman race aggressively in a bid to force selections. Joining Deignan, is teammate van Dijk, who will be eyeing up victory in the time trial stage to christen her rainbow bands in style.

Team BikeExchange bring a strong squad to Britain and Sarah Roy will be on the hunt for more stage victories. The 35 year old from Sydney will look to repeat the performances of 2017 and 2018 where on both occasions she sprinted to victory from a break. Teammate Teniel Campbell will also be a rider to watch in the sprints. Having taken her first victory in the white and blue of BikeExchange at the Tour of Ardeche recently and with confidence high she’ll be looking to continue her run of good form.

Donning the fluro yellow of Alé BTC Ljubljana, Marta Bastianelli, will be a rider to watch. Having won two races in the past month the Italian sprinter and classicist is clearly in good shape so expect to see her battling for stage wins. Teammate and Swiss champion – Marlen Reusser – is a contender for victory in Atherstone on stage 3. The silver medallist in the time trial at both this year’s Olympics and world championships will also look to seize any opportunities for solo moves and breaks.

British rider, Alice Barnes (Canyon-Sram) is well suited to this year’s parcours and will certainly be in contention for stage wins and the overall GC. The 26 year old, national road and time trial champion, has a strong finishing kick and performs well against the clock so expect to see her challenging for the blue jersey. Sister and teammate, Hannah, is also a fast finisher and great time trialist so expect to see her at the head of affairs too. With the Grand Depart fairly close to their hometown, the Barnes sisters will be motivated to perform well.

Another rider looking to ride well on home soil will be Joss Lowden (Drops – Le Col s/b TEMPUR). The 33 year old is a brilliant time trialist and will no doubt look to gain time in stage 3. Winner of this year’s Tour de Feminin in the Czech Republic, Lowden will look to animate the race and use her TT power to forge successful breakways.