The ultimate race of truth will unfold on Monday as riders take to the roads of West Flanders in a bid to win the coveted rainbow bands at the World Time Trial Championships.

The 30.3km course is one that favours the pure powerhouses with a flat, non-technical route in store. With a mere 54m of elevation, there is no doubt the ‘big-chainrings’ will be installed for this one!

Starting from the seaside town of Knokke-Heist the route hugs the exposed North Sea coastline for 1.5km before heading inland and south towards Bruges. Travelling through open fields and alongside canals, riders will pass through Westkapelle and the quaint medieval town of Damme enroute to the finish line in the iconic West Flandarian capital. 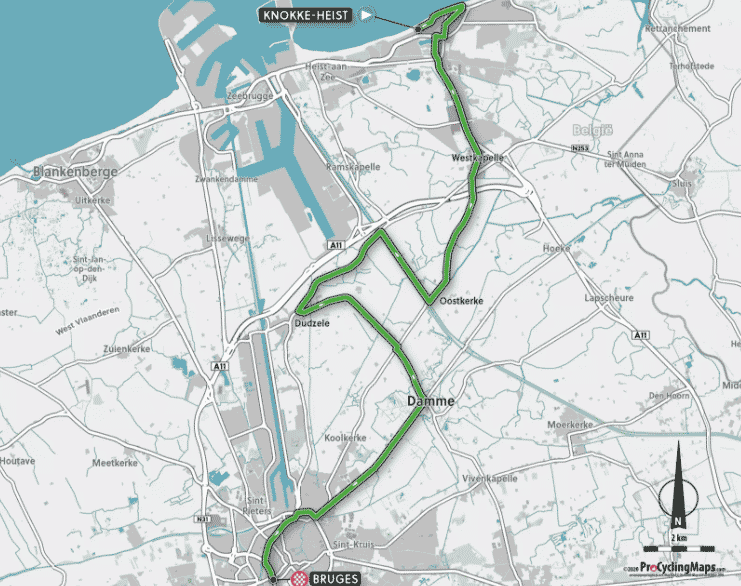 Unfortunately, defending champion, Anna van der Breggen, is unable to defend her title on Monday. The 31 year old withdrew this week citing concerns over her form and ‘energy levels’ after a long and demanding season. Despite her absence the field assembled in Flanders is a strong one with plenty of contenders vying for the win.

Van der Breggen’s compatriot, Annemiek van Vleuten, has been in stellar form since the Olympics and will be bidding to take a third world TT title on the Flandrian roads. The Olympic TT champion put nearly a minute into her rivals in Tokyo and will be looking to repeat that dominant performance on Monday.

Teammate, Ellen van Dijk, will also be a rider to watch. The 34 year old has stood on every step of a Worlds TT podium during her impressive career including the top spot in 2013. The course will suit the Dutch woman well and after her brilliant performances at the European Championships last week (a 2nd place in the TT and a 23km solo win in the RR), van Dijk will be hoping her run of great results continues.

Marlen Reusser comes to Flanders off the back of her European Championship TT victory in Italy. The 29 year old Swiss rider is in superb form and no doubt confidence will be high after a string of World Tour podiums recently and dominant displays of time trialling prowess. After finishing second in Imola last year (just 15 seconds behind van der Breggen) and second in Tokyo she’ll be hoping she can leap-frog her Dutch rival this time round and complete ‘the World and European double.’

Germany’s Lisa Brennauer is a renowned time trial specialist and is always a contender when it comes to races against the clock. World TT champion in 2014 and a 4 time national TT champion, Brennauer’s strength will be well suited to this course.

No TT preview can be complete without the mention of America’s Amber Neben. Out of 14 world championship appearances, the 46 year old has only failed to achieve a top 10 finish twice. Having donned the coveted stripes in 2008 and 2016, Neben is a preeminent force in the specialist discipline of time trialling. 5th in Tokyo (just 11 seconds shy of a podium) the Californian will be hoping for another top result on Monday as she continues to prove age is no barrier.

Under-the-radar Joss Lowden is also likely to challenge for a podium spot. The British rider unofficially broke the Hour record in training earlier this year and is a superb racer against the clock. With an official attempt on the cards for the end of September there is no doubt that Lowden will be in great TT shape, having focused much of her training towards the demands of an hour record. With a dialled position, an eye for aerodynamic gains and pure TT power, the 33 year old could certainly be a medal contender.