The biggest race of the year is upon us and an all-star cast will line up in cycling’s iconic heartland to do battle for the coveted rainbow bands.

Much has been made of the rather convoluted 157.70 km course that will host this year’s road World Championships. The distinctly noticeable omission of the mythical climbs synonymous with Flanders certainly raised eyebrows, but unfortunately economics played its hand in that regard. Whilst icons such as the Muur van Geraadsbergen, the Koppenberg, the Oude Kwaremont et al, will be missed, look beyond the murmurs of discontent and its evident that the ‘Flanders Worlds’ is still set to be as every bit as exciting as one would hope.

Leaving Antwerp, the riders head 56 km south-south-east to the finishing town of Leuven. From there the riders will first tackle 1.5 laps of what organisers have coined the ‘local circuit’. The loop features 4 climbs in relatively quick succession and these combined with the technical nature of Belgian roads will likely see the battle of attrition begin.

Then it’s on to the ‘Flandrien circuit’ which will be familiar to those who know the roads and climbs of Brabantse Pijl. 6 climbs are scattered along this lap including the likes of the Moskesstraat, the Smeysberg and the S-Bocht Overijse.

From there, it’s back to the ‘local’ Leuven circuit for another 2.5 laps. With 9 climbs in the last 40km the race will likely rise to an exciting crescendo with the finish itself awaiting on the slight rise of Geldenaaksevest. 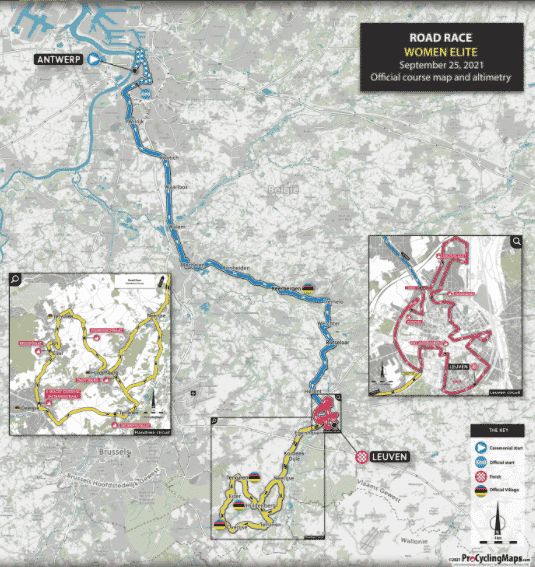 Despite the omission of the legendary climbs and the quirks of the complex route, the race still looks set to serve up the Flandrien-esque aggressive and unpredictable racing we all love. Favouring the punchy classicists, it will be a battle of strength, skill and nous.

With 7 rainbow road jerseys, 4 rainbow TT skinsuits and over 500 career victories amongst the squad, the strength and talent of the Dutch team is just extraordinary. All of the riders have burgeoning palmares and any one of the 8 could realistically win.  In theory the team should have every situation covered – a victory from a solo move, a win from a bunch kick or a win from a select break – but as we saw in the Olympics an upset is always possible.  Having won the World Championships for the last four years can the Dutch continue their reign in 2021?

Looking to dethrone the Dutch will be the American squad of Coryn Rivera, Leah Thomas, Ruth Winder, Lauren Stephens, Taylor Wiles and Kristen Faulkner.  With strength and experience aplenty they too have many tactical options to play and will be hoping that they can bring home the rainbow bands for the first time since 1980. Rivera is the only American (male or female) to win Flanders and the short, stinging climbs will suit the petite sprinter well.  Strong and with a ferocious kick, the Californian will be hoping to make the key selections. Alaskan Kristen Faulkner has had a standout season in her first year as a pro and will also pose a big threat. 3rd in Norway, 3rd in Plouay, the 28 year old is in great form and confidence will be high; expect to see her animate the race and look for opportunities to attack.

The Italian team also line up with strength and depth with the likes of Elisa Longo Borghini, Marta Cavalli and Marta Bastianelli. Longo Borghini is in great form and recently showcased her strength and tactical skill when she soloed to victory in Plouay. Third last year, the Piedmont rider, will be hoping for a similar performance this weekend. Teammate, Marta Bastianelli, also thrives on the roads of Belgium and in hard fought classics. Winner of Flanders in 2019, the 34 year old will be looking to repeat her 2007 World’s performance where she powered to victory in Stuttgart.

Lizzie Deignan had a quiet spring this year due to illness but, historically the Brit has always performed well in the early season classics. With strength, nous and experience in equal measure the 32 year old has the ‘holy trinity’ needed to triumph in Belgium. The race features a total of 20 climbs, including nine in the last 40 km which Deignan will no doubt look to use as a launch pad. Winner of Flanders in 2016, the Yorkshire woman will be hoping she can vie for the win on the Flemish roads again this weekend.

Riding on home soil Lotte Kopecky will be looking to make the key selections and unleash her finishing kick. The 25 year old has been riding well this year and with her overall victory in the Lotto Belgium Tour in June, a 4th at the Olympics and a stage win at La Vuelta, the Belgian will be full of confidence.

Fellow sprinter Chloe Hosking will lead the Australian squad of Amanda Spratt, Tiffany Cromwell, Brodie Chapman, Sarah Roy, Lauretta Hanson and Jess Allen. Hosking has had a difficult return to form since suffering from COVID-19 earlier in the year, however, despite the challenges, the 30 year old showed she’s back to winning ways. With a victory in the final stage of the Ladies Tour of Norway as well as a stage win at Ardeche last week, Hosking will be hoping to continue this run of good results.