The return to racing: Strade Bianche

After a months-long hiatus caused by the ongoing pandemic, Women’s World Tour racing returned this week with Strade Bianche!  The return of racing to Italy felt symbolic, as it was one of the hardest hit areas of Europe and this race was one of the first to be cancelled back in March. Personally, I felt some apprehension about the return to racing after the last few months. It felt strange, but also comforting to go through all the pre-race routines and to stand on a start line again.

We could not have asked for a more epic return to racing. The conditions were scorching hot, with temperatures hitting 40 degrees for most of the day. The gravel roads were in rough shape compared to past editions. Deep washboard ruts marked every road, with loose corners and big stones to navigate through a dusty haze. I think every rider and team have stories from the day ranging from heat exhaustion, crashes, to punctures. The winners are true deserving champions. We did not have the best day as a team, but Liane fought to the end for 16th place, enough to hold onto her lead in the World Tour standings after the win at Cadel Evans Great Ocean road race back in February. It is a race that people will talk about for a very long time!

The heat is what ultimately got to me, as turning the pedals over became a chore. Even as I struggled to pedal and think straight, I reminded myself that it was still a privilege to be taking part in a bike race at all. So I tried to enjoy the beautiful Tuscan countryside, and thought of the fans around the world who were getting some much needed entertainment and distraction from the current reality. 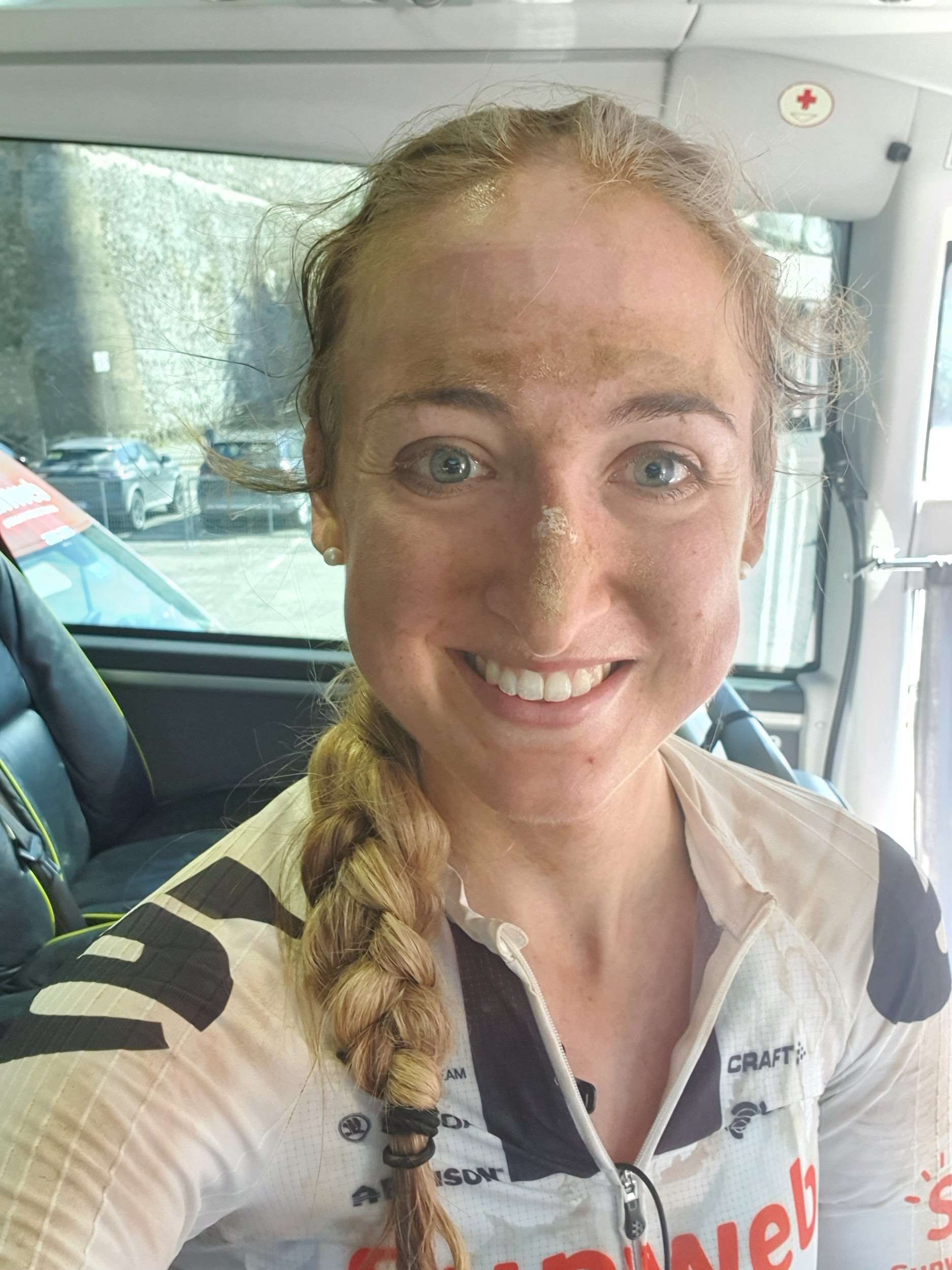 The UCI mandated protocols are not watertight and place a lot of responsibility on teams and organizers to figure out how to implement them. Before racing we must all undergo a serological test for antibodies and two PCR tests. Once 6 days before and another 3 days before. These tests are not simple to arrange, since riders and teams are expected to rely on the testing capabilities of the medical systems in different countries. There is also still the chance you could become exposed in between those tests and traveling to a race.

Some of the other protocols were fairly simple to follow. We had to wear masks at the hotel, to the podium presentation and up until the very start of the race, while being very careful of hygiene. There were limited fans allowed to the start area and in the final kilometres.

While the measures are well intentioned, the reality is that cycling does not take part in a closed stadium. There were far fewer fans out on the course, but some didn’t wear masks and still pushed riders up the steep slopes and offered water. As much as these things are nice gestures, they can’t be allowed during corona times. If riders need to respect all the rules, then spectators also need to wear a mask and stay distanced from riders for racing to work.

I hope everyone out there watching enjoyed the show. I hope to stand on a few more startlines this season with my Sunweb teammates. If riders, staff and fans continue to take personal responsibility for staying healthy and safe, then I believe we can continue cautiously with the privilege of racing.

I will be back next month with an update of the return to racing. You can follow online in the meantime on Instagram @leahkirchmann and Twitter @L_Kirch as I hang out on a mountain in Austria!