After a long build-up, one year longer than anticipated, it was finally time to head to Tokyo. We (the Danish National Track Cycling Team) had our final preparations in Ballerup Super Arena – the Danish track just outside Copenhagen. It’s always special to join the final camp. You can count down the training sessions, which is at the same time both a really nice feeling and a bit nerve-wrecking. All you can do is trust the work you’ve already done, as there is almost no time left to improve.

The cycling track in Japan was placed in Izu, a 2-hour car drive outside Tokyo, which meant we didn’t stay in the Olympic Village. We stayed at a hotel around 25 minutes from the track. Of course, living in the Olympic Village is truly something special. On the other hand, living near the track meant that getting to and from the track wouldn’t take a whole day – which is paramount before and during competition. 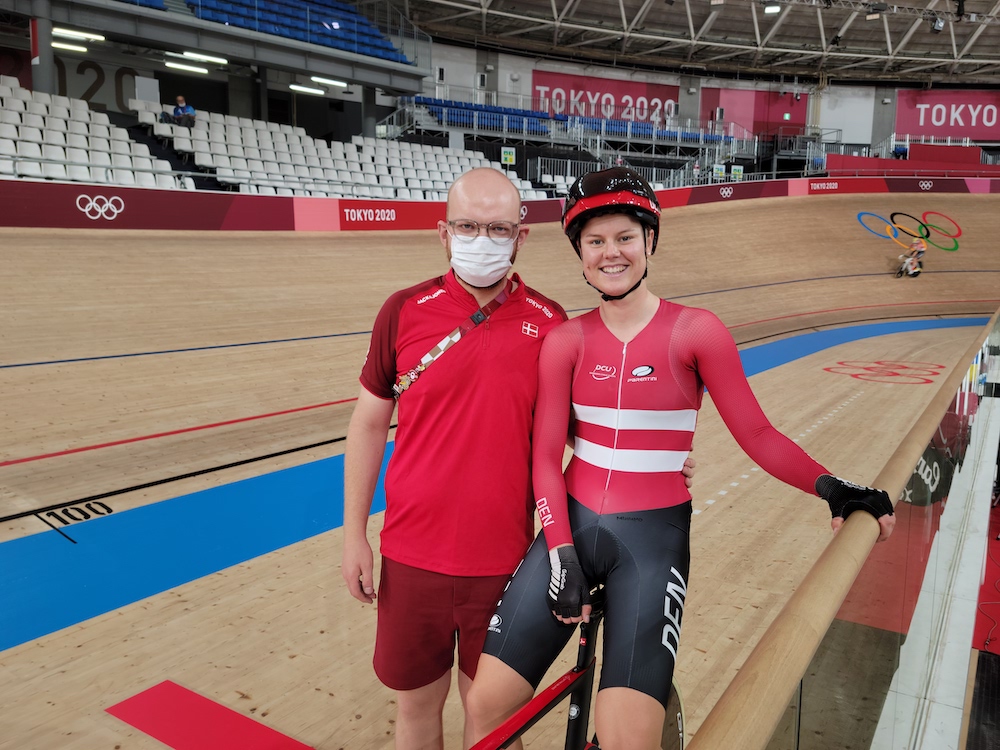 Madison was the main goal of the Olympic Games, so driving towards the track on race day, I could feel the pre-race nerves. Not too much, but just around the right amount. I did my usual warm up routine with music in my ears. We warm up on rollers in the middle of the track, while other disciplines are happening on the track and there is lot of activity. So, for me the music helps me get into my own little world, it helps me focus. When I lined up at the fence before the race, was the moment I started to get really nervous. At those moments I always try to focus on what I need to do, all the way down to the basics. In my mind I go: Julie will start, one neutral lap, then the gun, half a lap, I’ll roll off, one lap more, first change, and so on. And by the time I roll off, I’m in my zone, I’m not nervous anymore, it’s all about the race.

As predicted, the race was fast and hectic. But in the end, it was all we had dreamed of. We got our Olympic medal. Years of hard work that all came together. Sometimes I wished the time afterwards had gone slower. It’s like you rush from one thing to another, and almost don’t have time to enjoy the moment. I mean, I really did like it, but it just went way too fast!

Normally, cycling is a team effort but there is only one winner. In Madison, you both get on the podium. Nothing beats that feeling. Nothing. I really like that part, and one positive thing about COVID was that at the award ceremony they weren’t allowed to give us the medals, so we had to pick them up ourselves. This meant that I could give Julie her medal around her neck and she could give me mine. We hugged each other and I’m pretty sure we both smiled from ear to ear, even though it was hidden behind our face mask. 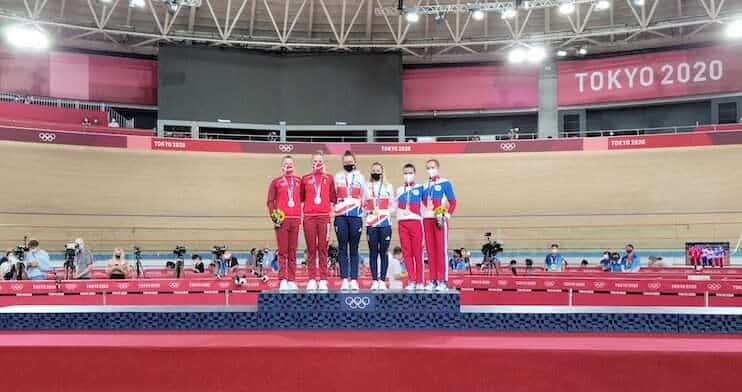 Two days later it was time for my omnium. The Madison had been a success, my Games was pretty much “saved”, but I still wanted to do well. In the 2016 Rio Olympics, Omnium was the only discipline I did (Madison was not on the Olympic program back then). I came in 5th, and I really would like to improve that result in Tokyo. In fact, I believed that I could take another Olympic medal if everything went my way.

We did 4 races in around 2.5hours (!!). The most compressed omnium, I’ve ever done. I did some pretty stable results in all the events. In the final points race, I reached out for the medal, I even was on the virtual podium with 2 sprints to go after a big solo attack. In the end, things didn’t go my way and I ended up coming in 4th. I am satisfied with how I raced, but a bit disappointed with the result. I would have loved to bring home another Olympic medal, especially after being so close. But at the same time, I know I can be proud of my effort. Sometimes you must take on a bit of risk and take some chances to win big. And I believe I did what I could to reach as great a result as possible. 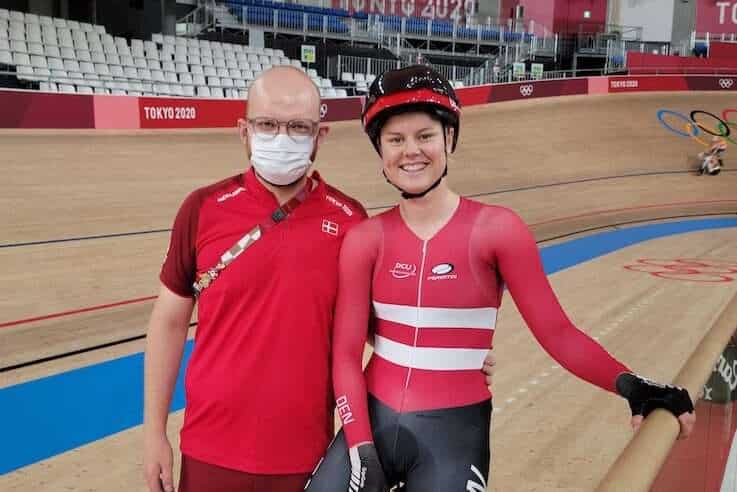 Arriving in the airport I was greeted by some family, a few of my best friends and some riders from my local club. Something I am very grateful for. I couldn’t stay long, as a bus was waiting for all of us Olympic Athletes arriving from Tokyo (basically, I was on the last flight “out”), which took us to an Olympic celebration showed on Danish National live TV.

Furthermore, me and the rest of the Olympic medallists from the track team got to go on stage the final day of the men’s Tour of Denmark (Saturday – 5 days after arriving back home). That was quite a cool experience to be on stage in front of so many people who all have an interest in cycling.

To finish all the celebrations off, my local childhood bike club Amager Cykle Ring had arranged a small reception the following Monday (one week after arriving back home). A nice gesture and fun to talk to some of the young riders – whom also were ready for a few matches of table football/foosball (yes, I am competitive in everything I do) and see more family and friends. I was happy to show my medal and hopefully inspire some young riders. Even though I’m always a bit out of my comfort zone at these things – give me a bike, then I know what to do 😉

With a blink of an eye

It took me some time to decide to add a little extra to this blog. A little about the time after. To put the experience, the preparation and the aftermath into perspective.

I’ve been in my own world, my Olympic Games bubble, for such a long time. It was actually very weird getting home. It’s hard to describe how I felt, but I guess the best word is empty. I’ve had Tokyo as a goal and destination for such a long time. And then, with a blink of an eye, it’s gone.

I’ve done two Olympics now, so I was prepared for what would come, or at least I thought I was. My silver medal in Tokyo was such a big result. It came after years of hard work and expectations, mostly from myself but also from the outside. It was just what I dreamed about, but I guess maybe that’s why coming home was harder than I’d expected it to be.

The first week after I was tired all the time. I felt that I was in a different place than everyone else. Like I had no clue how to get back into the daily routines. I feel happy and proud when I look at the pictures and think back on the journey and all the experiences. I feel like I am in a different place but everything else is still the same. I feel like I’ve been through this massive event, but “normal” people like my family and friends have a hard time understanding. I mean, I know they want to and they try. Second week was better, but I’m still working on “finding my way back”. Life keeps going and so do I. I’m setting new goals, making new plans. After almost two weeks home (my longest time since April) I’m back on the road with my road team, Trek-Segafredo.

The road cycling season continues until 31st of October, so I’ll make some new short-term goals, while I decide on what I want long term. After a successful Olympic Games I’m looking forward to join my teammates on the road, aiming to make the last part of the season a great one.  My last road race was two months ago, where I ended up crashing and had to pull out because of it. I’m racing the World Tour Race Simac Ladies Tour now – and I am hoping to end this one better! ☺