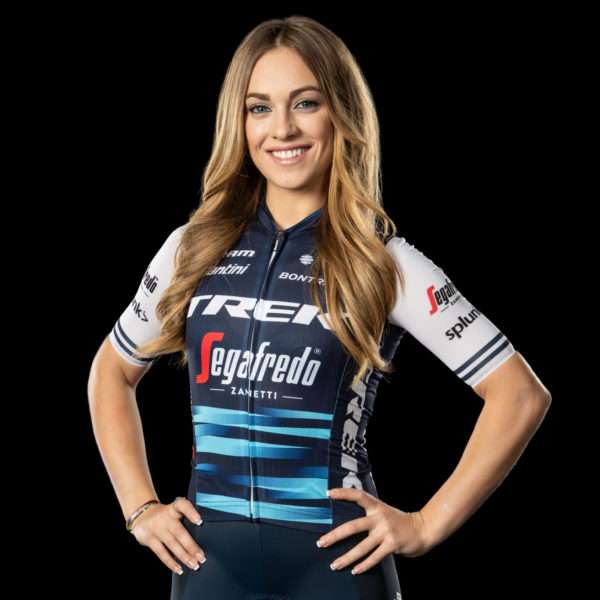 Thanks so much Letizia for your time, considering you are recovering from a crash. We’ll get on to that a little later, but firstly… Where are you from in Italy?

And how did you first start cycling?

I was interested in cycling early on, when I was five years old, but even my parents aren’t able to explain why I had this “love at first sight” for it. They told me I was always asking for a bike and one day they gave in, taking me to the bike shop of Maurizio Fondriest, close to my house. After he saw my enthusiasm, he suggested to my parents to let me join the local team that included more than 60 kids. I started to push a lot with them because I really wanted to ride. They were really sceptical at that point. My mother wanted me in dance class, and she also took me there a few times to try to persuade me, but every time I cried because I didn’t want to do it! And my father saw cycling as a male sport. But then, they said “OK”. And since that moment I never stopped riding. Of course now, mom and dad are my best supporters!

So, it sounds like you aren’t really from a cycling family?

No. My father was – and is also now – a friend of Fondriest and sometimes he watched cycling on tv, but he never rode.

And are there any other riders you rode with as a junior, who are in the elite peloton now?

Yes, many riders of Valcar Team, for example. More or less, 10% of the riders who rode as juniors with me are now elite.

Cross country skiing, first of all. That was the first sport I practiced at three years old. I remember a lot of family outings at the weekends to Madonna di Campiglio. Then skiing, climbing and mountain running. I still continue to do these activities, of course without taking any risks that can affect my training and racing. On TV, I love to watch swimming. I admire Federica Pellegrina, she is such a sport personality. And I also watch soccer, sometimes.

When did you first realise you had true potential in this sport?

I started to believe I could be good on the bike when I was at the European Youth Summer Olympic Festival in 2015. There, I took my first road race win with the Italian team. I knew then I could win at the European level, with very strong competition.

Before Christmas you were involved in a crash with a car while out training. How are you post crash – how is your wrist/hand fracture and what is your expected recovery?

I feel good so far. I just ended my first camp with the team and I had chance to train well. I have a lot of wish to race, to push hard on bike. I’m really motivated for the coming season.

How will this affect your season on the track?

Honestly, I don’t think it will. My hand fracture just delayed the preparation of the season, but not by too much. And for Tokyo – no problem.

What’s next? When will we see you back racing?

If I don’t have any obstacles in my path, I think I’ll be able to race the track Worlds at the end of February. Then, together with the team, we’ll schedule the debut on road.

You were involved in a crash with a car – how dangerous do you think the roads are for cyclists, and what more can be done to make us all safer?

It’s a huge problem, there’s no doubt. There’s plenty to do, especially in Italy, but first of all we need a cultural change. Of course, having laws that safeguards cycling should be a must, everywhere.

Looking back on 2019 – what are the big highlights?

On the road, the Under 23 European Championships in Alkmaar were amazing. I faced the event after a troubled period due to the renal problem I suffered in May and the win was a turning point. On the track, it has to be the silver medal in the omnium race at the World Championships in Poland.

You picked up one of the very first pro wins of the year – stage one of the Women’s Tour Down Under. The first for the team too! What are your memories of that? How important was it to get the team off to a good start in 2019?

It was great, of course! I won the first race for a brand new team and all of us were so excited. The win was a boost of confidence for me, but the best memory I have was the feeling with my teammates. For me, it was confirming their trust and confidence, being a rider able to finish off a team effort.

And third at Gent Wevelgem too – cementing you fully as a firm contender on the road as well as the track. How was that race for you ?

It was a very hard race. Firstly, the distance was “abnormal” for me, I didn’t have much experience racing that far, and secondly – the weather! Because of this, in the finale I had tired legs, but it was a great experience and a good result. I saw first hand how amazing cycling is in Belgium too.

And looking ahead to Tokyo 2020 – what is the dream? What are your goals?

The dream, without any doubt, is the gold medal. The goal is to be on podium. It will be hard, I know, but I want to be ready for this challenge.

Women’s cycling is making stops forward – what are the biggest challenges for the sport?

First, we need more visibility, so exploiting traditional media, web, multimedia and of course social networks. This would be a big step to earn the attention of the general audience and to move to the next step – the economic sustainability. It is better in comparison to men’s cycling, but the road is long. The good thing is that, day by day, more people see us as professional riders.

Trek Segafredo prides itself on equality between the men’s and women’s teams – what are your experiences of this in the first season? How good is this for women’s cycling?

Joining Trek-Segafredo was the best choice I could have made for my career. The team, together with sponsors, are doing an incredible effort for women’s cycling. It’s a big statement and a push also from other teams to raise the level. We – as women – must hope that other teams and sponsors in the future want to invest as much as Trek-Segafredo.

And two women as DSs – what is it like to work with Ina and Giorgia, who I’m sure was an inspiration when you were growing up?

Ina and Giorgia are my first female directors and, honestly, I can affirm they have everything to compete with male directors. The additional value is that they have long and successful careers, and lots of experience and they understand me in many aspects, as well as suggest ways to manage some situations. We have a good, honest relationship and there’s mutual trust.

Who in cycling inspires you? Which cyclist do you look up to?

I love the attitude of Peter Sagan. I love the way he rides and how he interprets cycling for the fans. In the women’s peloton, I admire Marianne Vos. She has been – and is still now – an idol for me.

Away from cycling, what do you enjoy in life?

Favourite ride?
In Spain, close to Benicassim, there’s plenty of climbs with amazing summit views to the sea. I love natural places.

Honestly, I don’t have a favourite race. This year I enjoyed Gent-Wevelgem, but I am looking forward to expanding my experience in other races. On TV, I like watching the World Championships, where the stakes are high.

Olympic – both track and road race, Worlds and Tour of Flanders. In this order.

What three items would you take on a desert island with you ?