Changing location and moving a World Championships is no easy task, luckily 2020 will see a new Individual Time-Trial and Road Race world champion crowned. Imola and the Emilia-Romagna Region will host the Women’s Elite Time-Trial on the 24th of September and the Women’s Elite Road Race on the 26th September. With the famous Formula 1 Enzo e Dino Ferrari Imola racetrack taking centre stage hosting the start and finish for both races.

The best way to describe the Time Trial is fast! 31.7km of smooth tarmac and flat terrain, will see the big chainrings installed on to the rider’s bikes. The final three kilometres are a little more technical but shouldn’t pose too much danger to the riders. 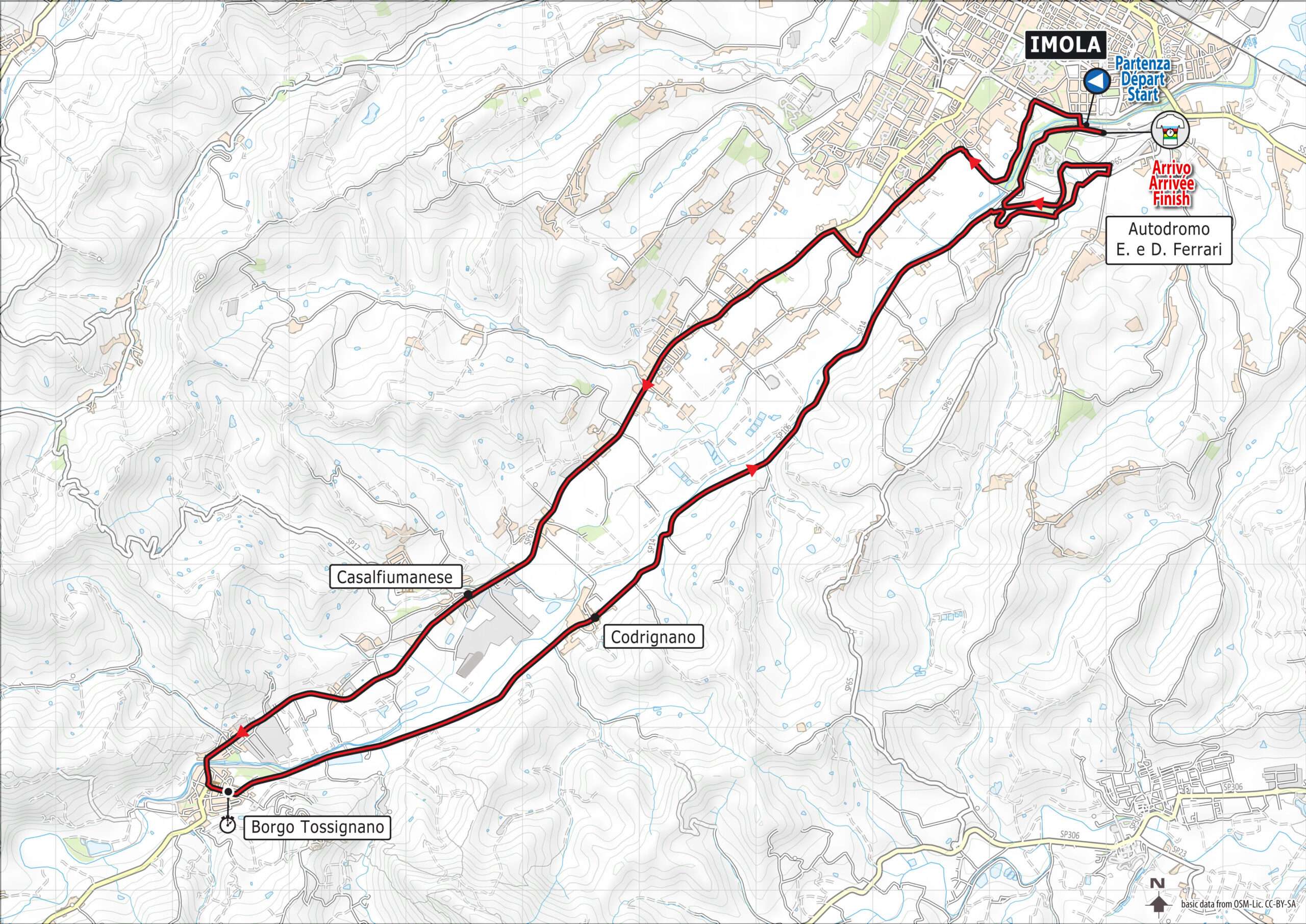 Can Dygert win back to back World Titles? The reigning World Time Trial Champion will come to Imola with the pressure on her shoulders. Last years display of power in both the ITT and road race make her the outright favourite. The only unknown is Dygert’s form, she hasn’t raced in Europe this year but if she has prepared well there shouldn’t be many riders who can challenge her.

After winning the European Time Trial championships a month ago van der Breggen will be full of confidence. Yet the flatter route could be detrimental to van der Breggen’s chances, recently taking GC victory at the Giro Rosa and with the World road race taking place only two days after the ITT she may have her mind on other things.

Looking at the course you wouldn’t be surprised if van Dijk designed it herself. The Dutch powerhouse will be excited to get those wheels turning and see what she can do. Finishing runner-up at the European Championships the former World Time Trial champion will be looking to pull that rainbow jersey over her head 7 years after she did the first time.

Former World Individual Time Trial champion Brennauer will certainly have enough speed for the fast course. Finishing 4th at the European Time Trial championships last month she obviously has the form to fight for another world title.

Others to look out for are Swiss National Champion and 2019 European Games winner Marlen Reusser. 21 year old Juliette Labouse who recently won the French ITT and Italian Vittoria Bussi, who will be hoping the passionate home crowd will push her to a top finish.

143km and 2,800m of climbing. It’s a tough one. 5 laps of a 28.8km circuit with a flat finish but expect the race to be decided before we return to the famous Imola track for the final time. 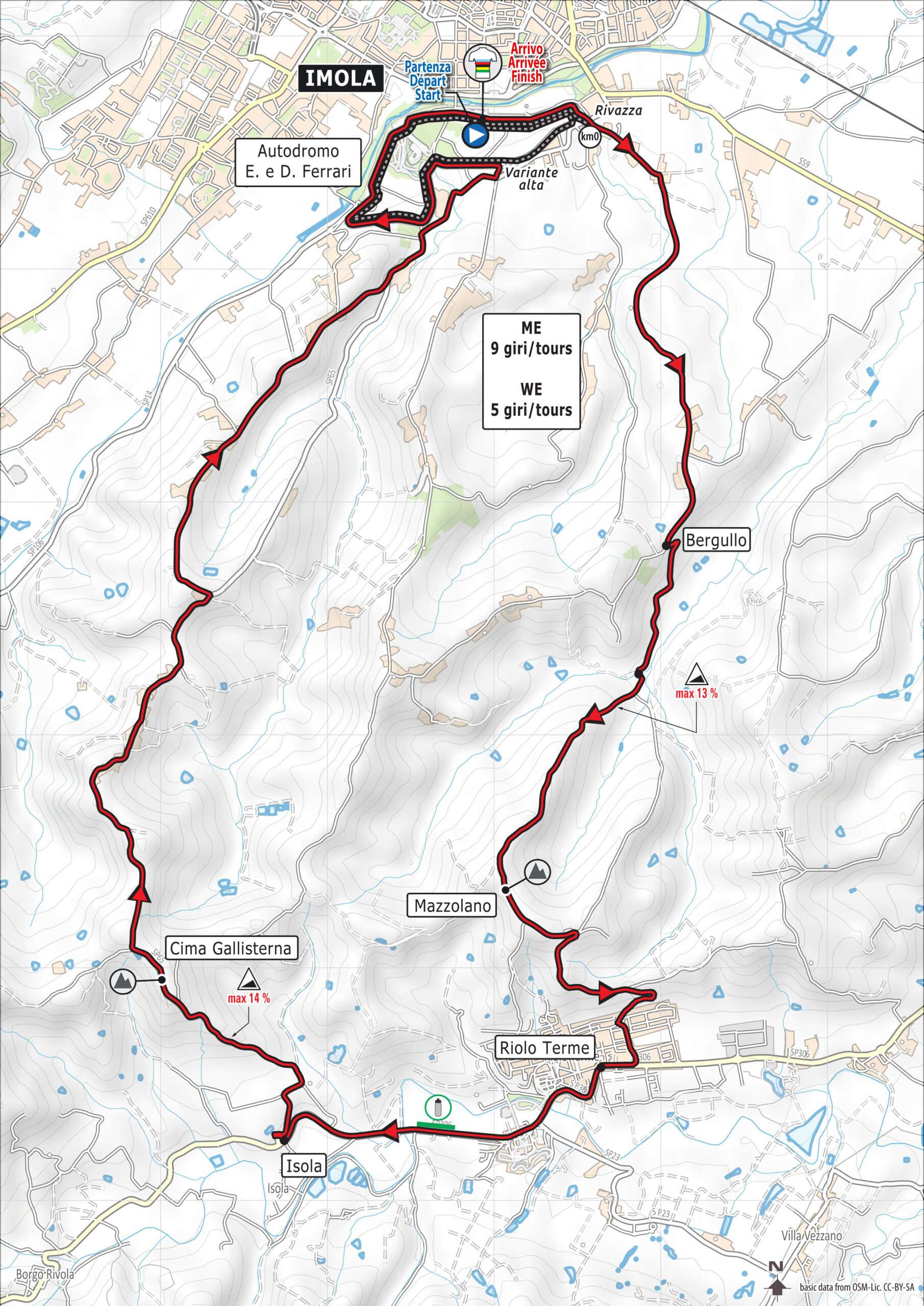 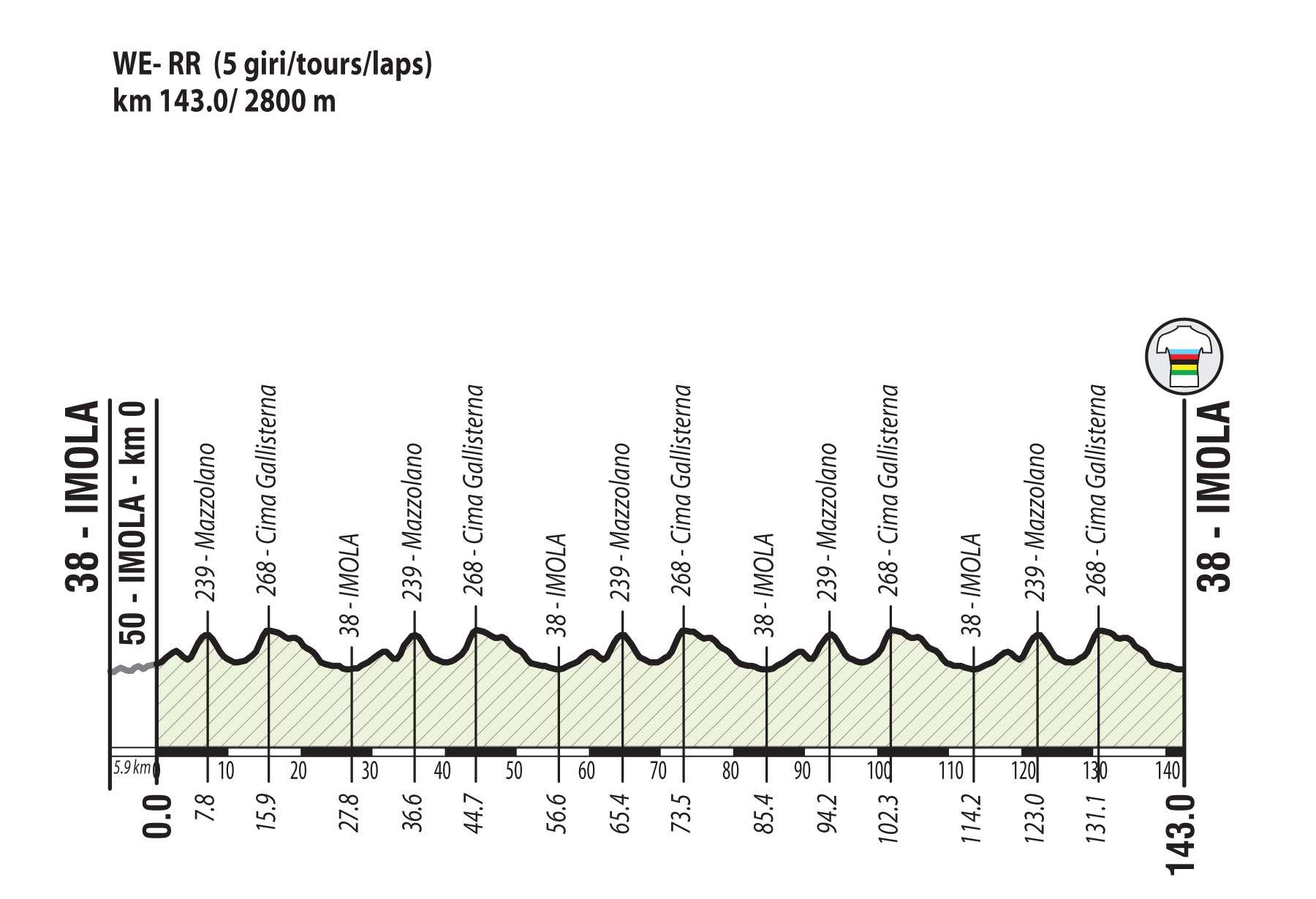 Two tough climbs on the circuit will test the riders. The first climb is Mazzolano 2.8km in distance with an average of 5.9%. The key part of the climb comes in the first 1km with a peak of 13%, meaning positioning will be vital, if you’re too far back it could be race over. Expect a race to the bottom of the climb in the opening laps as the riders will fight for position. 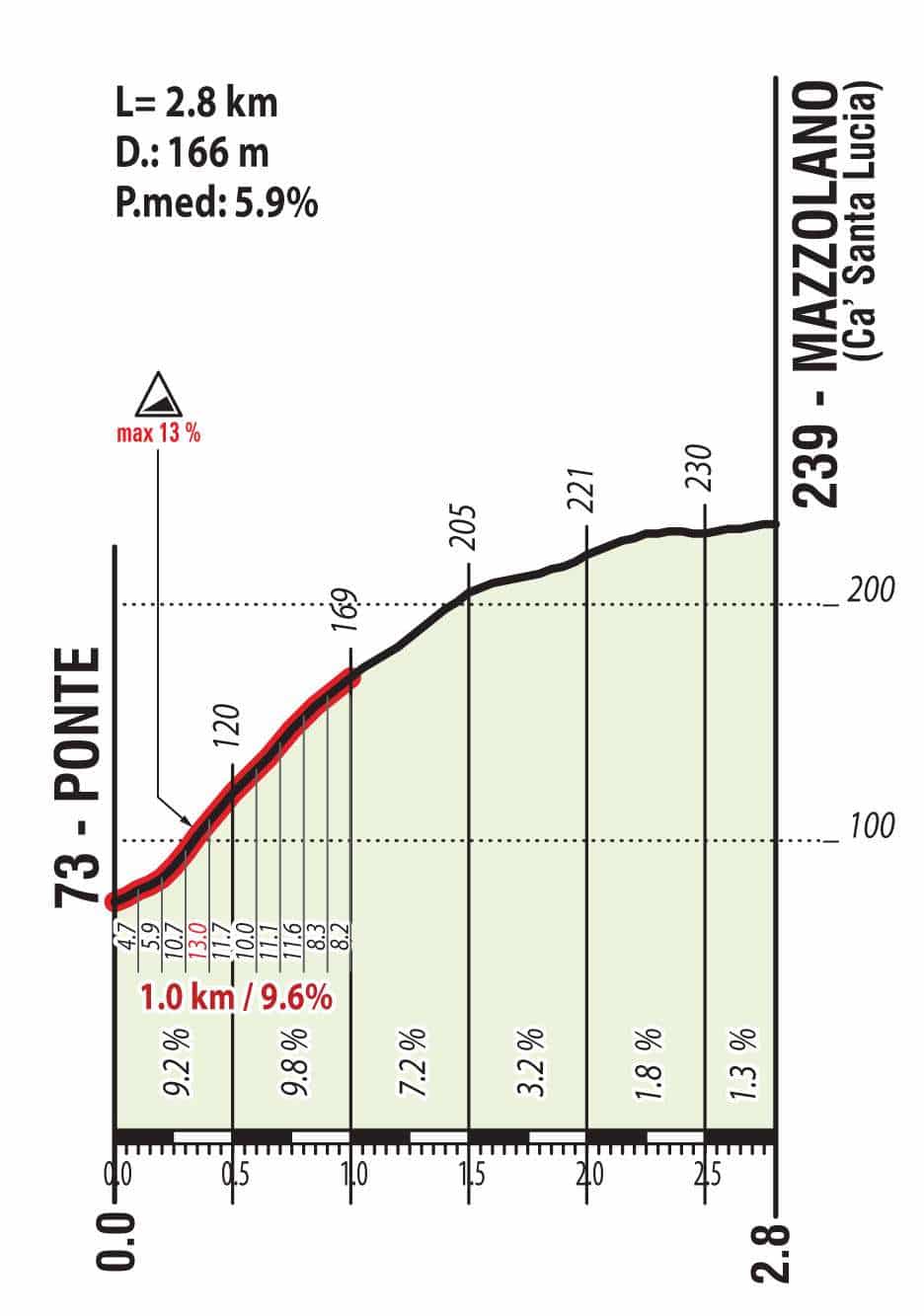 Cima Gallisterna is similar in length, 2.7km with an average of 6.4% gradient. Scenic switch backs make the climb but the tough middle section of 1.3km at 10.9% will be the launch pad for attacks. From the top of the climb it is only 12km to the finish, the fast run in could be perfect for a solo attack. 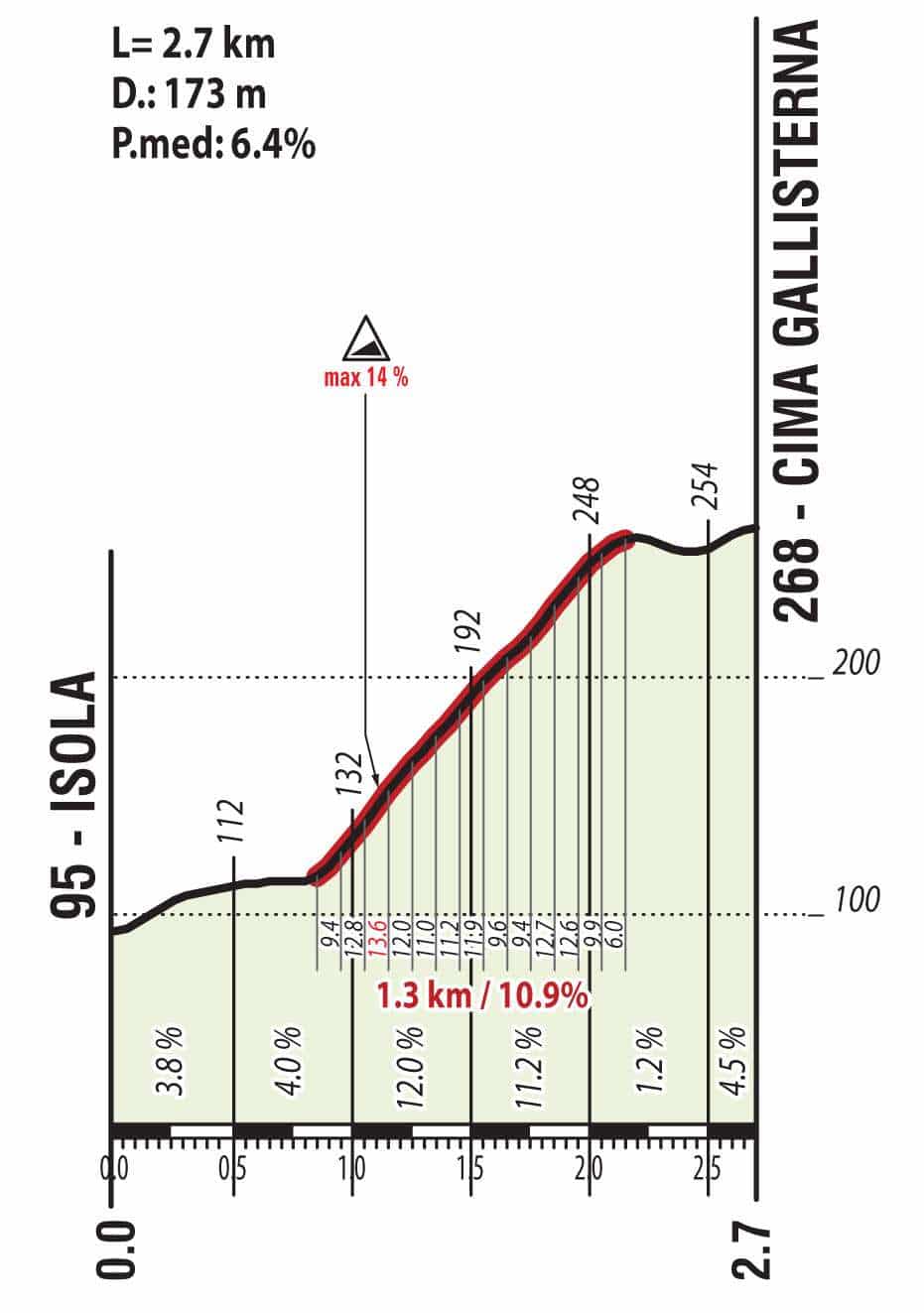 One thing for sure this years World Championships will be a compelling and animated watch. We still don’t know if defending champion Annemiek van Vleuten will the World Championships, before injury she was out right favourite to do the double. Van Vleuten is set to travel with the national team and will decide on Friday if she races on Saturday.

It’s not all doom and gloom for the Netherlands, even without van Vleuten starting who can look past Anna van der Breggen. The current Olympic champion and winner of the recent Giro Rosa will be one to beat. One of AvdB’s biggest competitors is compatriot Marianne Vos, the three time world champion and one day specialist should suit the tough terrain. With a flat finish and if Vos is in a small group you wouldn’t bet against her. Kasia Niewiadoma should have the whole backing of her Polish team and the strong showing at the recent Giro Rosa should fill her with confidence. The Italian crowd will be hoping Elisa Longo Borghini can pull on her first rainbow jersey, the stage win at the Giro Rosa and runner up finish to van Vleuten at the recent European Championships means Longo Borghini has a great chance of fulfilling Italian hopes. Lizzie Deignan has had a quiet Giro Rosa working in support of teammate Longo Borghini, we shouldn’t forget the recent win at GP Plouay and La Course. The former world champion may sneak under the radar at first but you can’t count out Deignan if she comes in the final kilometres in a small group. Out and out climbers like Cecilie Uttrup Ludwig and Ashleigh Moolman Pasio will be making it as hard as possible over the climbs in the hope of giving themselves the biggest chance of winning.

What ever happens the tough parcours means a deserving champion will stand on the top step in Imola.