The Women’s WorldTour calendar will see its first race play out on the scenic white gravel roads of Tuscany with the seventh edition of Strade Bianche. The course is undulating, and although it does not feature significantly long climbs, it does have an elevation gain of over 1500 metres, consisting mainly of punchy hills, many of which are unpaved.

The 136km-long route encompasses eight gravel sectors, ranging from 800 metres to 9.5km in length. At a cumulative length of 31.4km, these gravel roads comprise over a quarter of the total route, varying significantly in length, difficulty and terrain. While some feature sharp ramps, others are flat or contain meandering descents, demanding a wide variety of skillsets from the riders.

The route in detail 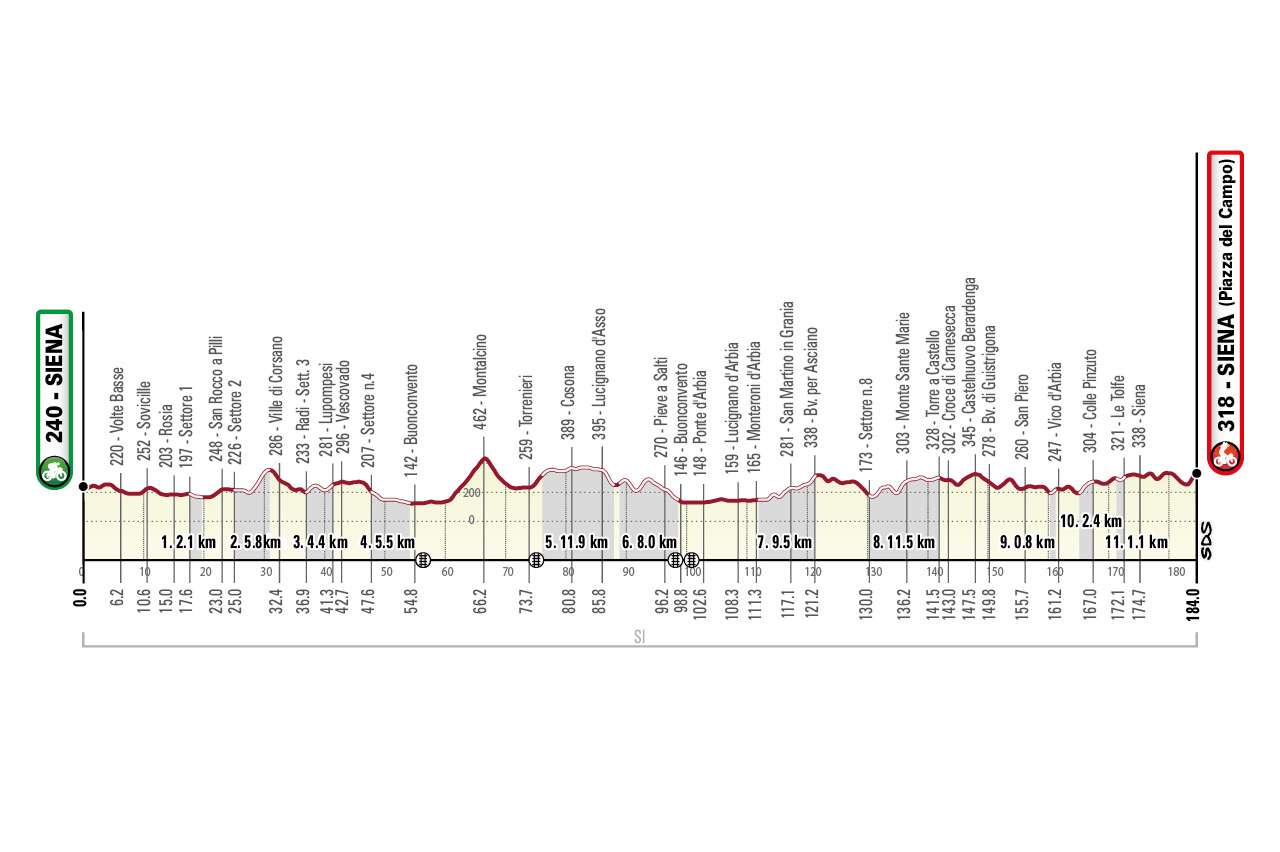 The peloton will already face the first 2km-long gravel sector 18km into the race, a relatively easy opener which is followed a few kilometres later by the second sector. It’s here that the first challenge of the course begins, with gradients exceeding 10 per cent.

Two gravel sectors later, they’ll be able to refuel at the feedzone in Ponte d’Arbia. However, there won’t be much time for respite, as they’ll soon reach the 9.5km-long gravel sector in San Martino. This sector is challenging not necessarily by virtue of its length, but rather its continuous undulations, and is capped off by a twisting ascent before once again reaching tarmac.

Following that is a long section without flat stretches, with the riders not seeing the ‘sterrati’ for another 35km. It is at that point where the riders will have to tackle a quick succession of unpaved sectors featuring double-digit gradients.

The final two gravel sections are particularly tough, with the Colle Pinzuto ramping up to over 15 percent at the sector’s commencement, and the final segment up to Tolfe reaching 18 percent. Having taken on that last unpaved challenge, only 12km of racing remain until the Piazza del Campo.

The final kilometres feature a descent finishing in the Via Esterna di Fontebranda, before the route kicks up again, passes beneath the Fontebranda Gate and its paving slabs with 1km remaining, and soon afterwards reaches Via Santa Caterina and its 16 per cent gradients.

After flattening out, and following a series of subsequent turns, the route then enters the Piazza del Campo, only 70 metres ahead of the finish line, with the final 30 metres presenting a downhill run-in to the finish. 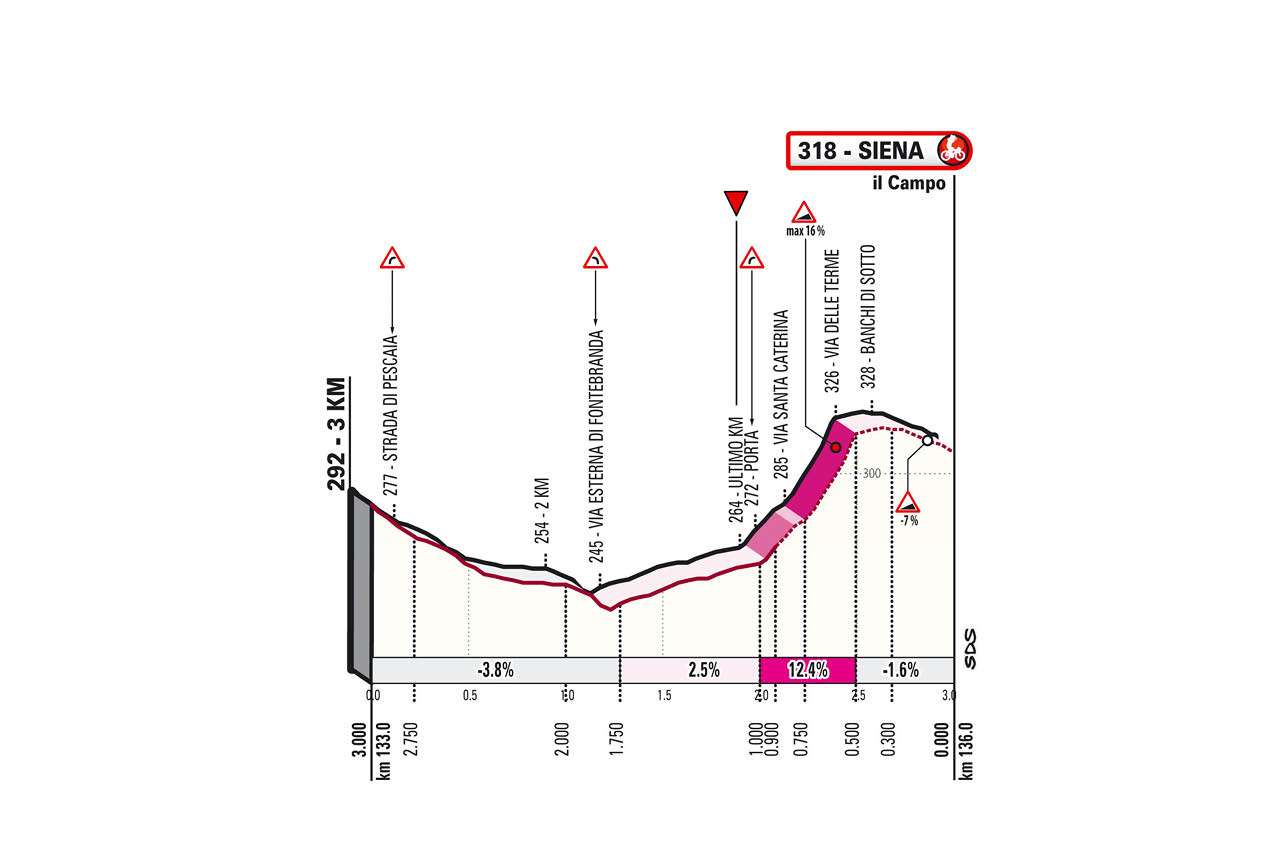 How will the race be decided?

Several wins have been taken following solo attacks or breakaways, as was the case with Annemiek van Vleuten in 2019 and 2020 and Anna van der Breggen in 2018. However, having said that, the race could equally come down to a matter of seconds, as we saw in the 2016 and 2017 editions, won by Lizzie Deignan and Elisa Longo Borghini by a slim margin of only 2 and 3 seconds respectively.

With the race lending itself to decisive tactical manoeuvres over the final kilometre, just as much as it does to long range attacks, a variety of riders come into contention.

The current European Champion, Annemiek van Vleuten of Movistar, is the only rider to have won the race twice, in 2020 and 2019. Other former winners include World Champion Anna van der Breggen of SD Worx, Elisa Longo Borghini and Lizzie Deignan, both of Trek – Segafredo.

While there have only been a handful of races so far to give indicators as to the riders’ form, it’s always difficult to look past Annemiek van Vleuten as a strong favourite, who’ll be looking to gain a win for her new team at the first WorldTour race of the season. After having missed the crucial split on the Leberg climb at Omloop Het Nieuwsblad, she will be no doubt remaining particularly attentive to any decisive moves on Saturday.

Anna van der Breggen started her season with a win at Omloop Het Nieuwsblad. If her performance in Belgium is any indication, she will be coming into Strade Bianche in strong form. In her final season, she will be looking to continue her winning streak, this time on the steep climbs and gravel of Tuscany. She won the race previously in 2018, when she launched a trademark long-range attack to take the win by almost 50 seconds, so will a similar move from the Dutch World Champion net her the win this year?

Kasia Niewiadoma of Canyon//SRAM has an impressive showing at this race, having been the runner-up three times in a row. Is it her time to stand atop the podium this year? With her strong past record, she clearly has an affinity for the race and will definitely be another rider to watch.

Cecilie Uttrup Ludwig is yet another contender. The Danish rider also has an impressive record at the race, having never placed outside the top 10, and with a best result of fifth in 2019. With the support of her FDJ Nouvelle-Aquitaine Futuroscope squad, she’ll be hoping to capitalise on her climbing ability to take her first WorldTour race victory this Saturday.

Finally, Trek-Segafredo’s Italian road champion Longo Borghini will no doubt be a home favourite, having won the race in 2017 and finished third in 2015 and 2018. In her five total participations in the race, she has never finished lower than fifth. We could potentially see her on the podium again this year.