The white roads of Tuscany play host to the opening round of the Women’s World Tour this weekend. Find out all you need to know about the race in our preview.

Starting and finishing in Siena, the 8th edition of the Women’s Strade Bianche, will see the peloton tackle the iconic dirt roads of the familiar 136km loop through the scenic vineyards of the Chianti region. 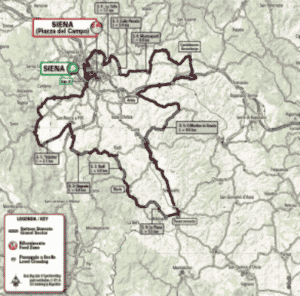 Steep, unrelenting hills and 31km of white gravel combine to make for one of the hardest days of racing of the year. The jagged, sawtooth-esque profile provides no respite and only the strongest will triumph in this race of attrition.

The unpaved, gravelled country lanes, split over 8 sectors, account for 23% of the race with the longest ‘strada bianca’ – the 9.5km sector of San Martino – coming after 70km. The most notorious sector – the four-starred Colle Pinzuto – comes just 20km from the finish and marks the start of a climactic finale.

At 12km to go, the peloton faces the last gravel sector – Le Tolfe – which opens with a technically  demanding descent before continuing onto a punchy and often crucial 18% climb into the village of Tolfe. 10km of twisting, undulating terrain later, the iconic Fontebranda Gate looms – beckoning one last and often decisive effort for the final 1km on the Via Santa Caterina climb. 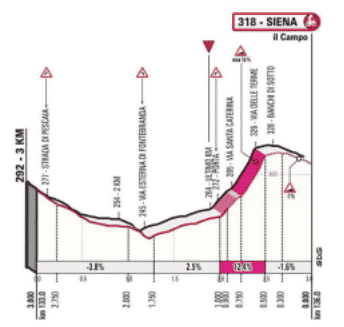 Upon passing through the gate, the flagstone road kicks up to 10%, then with 500m to go the medieval pave steepens to a stinging 16%. A few hundred meters later a sharp right sees riders turn into Siena’s illustrious Piazza del Campo and with 100m to go the road finally dips down to the line where a worthy winner is crowned amidst the Renaissance grandeur.

Defending champion, Chantal van den Broek-Blaak (Team SD Worx), will be looking to repeat her success of 2021 where she powered to victory on the final ascent up to the Piazza del Campo. The win finished off a dominant display of strength and teamwork from the SD Worx squad who played the numbers game in the finale and placed 4 riders in the top 11. With Demi Vollering and Ashleigh Moolman Pasion joining van den Broek-Blaak this year, expect to see a similar tactic again from the Dutch team.

Rivalling the line-up of Team SD Worx, is the champion’s-jersey-cladded squad of Trek-Segafredo. With the European Champion (Ellen van Dijk) and World Champion (Elisa Balsamo) lining up alongside the current double Italian Champion, Elisa Longo Borghini, Trek Segafredo certainly have the strength and depth to vie for team domination. They have several tactical options to hand but are likely to favour team captain Longo Borghini, who  after the heartbreak 2nd place of last year, will be even more determined to go one better in 2022. Can she raise her arms aloft in the heart of Siena’s medieval city whilst bedecked in the Italian tricolour jersey?

Van Dijk’s compatriot, Annemiek van Vleuten (Movistar), will be looking to add a third Strade  Bianche victory to her tally and make it 5 consecutive Dutch wins. Despite crashing hard at Paris-Roubaix in October and breaking her pelvis, the 39 year old has demonstrated a powerful comeback with two wins from two in the last fortnight. Van Vleuten is clearly in great form, so in trademark ‘Annemiek’ style expect to see her use the likes of the Colle Pinzuto or Le Tolfe to launch a long-range attack.

Fellow Dutchwomen, Marianne Vos (Team Jumbo-Visma), will look to claim the first Strade Bianche  podium of her career. It is rare to find a race Vos has not won – let alone not podiumed – so the Cyclocross World Champion will undoubtedly be motivated to change that this year and add another Classic’s result to her burgeoning palmares.

Canyon Sram’s Kasia Niewiadoma has had 6 top 10s and 4 podium spots at Strade Bianche, but so far, the top spot has eluded the 27-year-old. She’ll be hoping that 2022 is the year she can finally bring home the win for Canyon Sram.

Similarly, Cecilie Uttrup Ludwig (FDJ) is another rider with many top 10s to her name; out of 6 appearances the ebullient Dane has only failed to finish inside the top 10 once. Always a rider to  watch out for, Uttrup Ludwig will be hoping that with the help of teammates Marta Cavalli and  Brodie Chapman she can finally secure a podium finish in Siena.

In their inaugural World Tour race, the new UAE Team ADQ, will be looking for a strong performance. Spearheading their charge is likely to be 34-year-old classicist Marta Bastianelli who won the opening race of the year at the Vuelta CV Feminas. Teammate, Mavi Garcia, was second in 2020 and the 38-year-old Spaniard will likely pose a threat again this year.

Strada Bianche is relentless and a race of attrition with each gravel sector and hill serving to thin down the bunch. Set against the backdrop of the impressive Tuscan scenery, the race is breathtaking to watch, and the mix of terrain, roads and unpredictability makes it a spectacular race for fans and riders alike.