My goal for the Vox Performance Project was to hit my highest ever peak sprint power coming out of winter, so I could go back to training my endurance base through spring and be ready to spend long days riding in the high mountains when the passes open in summer. Spring equinox has come and gone, the blossoms on the apricot trees on the valley floor have given way to the unfurling of the first leaves, and evenings are long, mild and clear. It’s already starting to feel like summer. As the ski season has wound up, I’ve slowly increased my time on the bike, from 5 up to 8 and then edging towards 12 hours a week. But that peak power goal hasn’t exactly happened, despite hitting a best ever 10 second power (12.4 w/kg) in March. After equalling my previous maximal peak power in mid-February, the numbers plateaued. Admittedly, I shifted focus on my training, and probably needed to add some off-the-bike strength work to really hit the numbers I was dreaming of.

The reason for a shift in my training was that I was preparing for a second season of Zwift racing with Rocacorba Collective. To support this, I’ve pivoted my focus away from maximal sprint power, towards increasing my Vo2 max. The idea has been to rebuild my 1-5 minute ‘punch’ that should allow me to hang on to the front bunch until the pointy end of the races, so I can then put myself in a position to actually use my max sprint across the finish line at the end.

Funnily enough, after two years of unstructured cruising around on my bike, I’ve remembered that I actually really like structured training. I’m good at doing it, my body responds well to it, and I love being able to assess the development week on week, month on month. I haven’t done any maximal tests lately – but seeing how my numbers are progressing in training (including equalling my best ever 20 minute power at the end of a long ride the other day), I’m almost, for the first time ever, looking forward to seeing what I can push out in my next FTP test. It’s been a nice reminder that while sprinting, Vo2 Max work and endurance riding use different energy systems, and to maximise them you need to train them differently, they are still all interconnected. Improvements in one area can transfer indirectly to others – perhaps especially if you are a bit detrained like I was! After stagnating for a few years, all I needed to see improvements across the board was to change things up, remember the kinds of efforts my body responds well to, and fuel, hydrate and recover from those efforts properly. Simple, right?

My recent zwift races have been great fun and I’ve performed much better than the start of the first season. It’s a great feeling to be strong enough to animate the front of the race, be involved in team tactics and put out bursts of power to navigate through the group. These are the aspects of racing that really appeal to me and suit my physiology. Zwift races might be pretty niche, but they’re a great way to test and see improvements in a different setting – and having a team of other awesome women around me makes it all the better. In one of my recent races I even managed to get my first ever glucose score of 100 in the Supersapiens app, confirming I nailed my fueling for the intense effort – something I was very proud of! 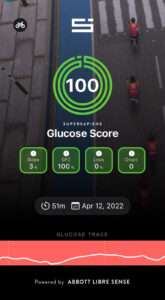 The habits I’ve built over the last four months using the Supersapiens continuous glucose monitor (CGM) and products from Precision Fuel & Hydration are now pretty ingrained in my routines. A good protein-focused breakfast sets me up for stable blood-glucose levels through the day, and a short walk outside in the sun after lunch helps keep them steady. I never, ever eat in the 2.5 hour window before a ride, making sure that I don’t go straight into a low blood sugar state once I jump on the bike which I know can make my legs feel like lead. I pre-hydrate with a strong electrolyte drink for key intense training sessions and races, feeling the difference it makes to my ability to perform and get the blood pumping. And of course, I eat adequate protein and carbohydrate after an intense session to replenish my body so I’m ready to go again the next day.

While these habits are set, I still find I really have to focus to get the amounts and timing right for a given workout on a given day. These aspects can shift based on the type of workout, time of day, and phase of my menstrual cycle. My goal for the next few months is for these habits to become more intuitive, to really combine science with listening to my body until it all feels second nature. For example, this might mean really dialling in my understanding of what 30g of 60g of carbohydrate looks like in my favourite ride foods, releasing me from the need to calculate and concentrate so much on the numbers each day. 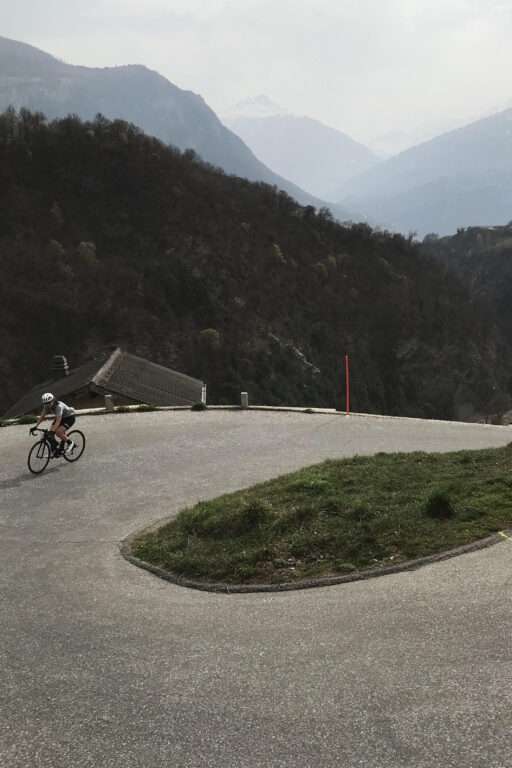 As we turn into summer I’ve also been thinking about my hydration plan again: knowing I will be moving into much longer rides, at altitude, and with temperatures in the mid 30s (degrees celsius). As a longstanding sufferer of mild heatstroke, that’s something I’d love to avoid this year. Switzerland is dotted with public water fountains – even in the most remote places – so I’m never in fear of running out of water. But I’m now carrying extra electrolytes in my pocket to add mid-ride, knowing how much of a difference having the right concentration of electrolyte in my water makes to my body’s ability to actually absorb the fluid. With two bottles on my bike, I like to keep one topped up with a high concentration electrolyte drink and refill the other one with fresh water – simply because I love the taste of the pure alpine water here. Then I just make sure to alternate which one I’m sipping from to get the overall electrolyte concentration that my body needs right. As the temperatures heat up I might do another sweat test, to check I still have the concentrations dialled in for me.

I’ve also enjoyed testing out the new chews from Precision Fuel & Hydration, which are honestly so delicious, reminding me a lot of Turkish Delight. Perfect for when I need not only a physical but also an emotional pick-me-up towards the end of a long ride. The two 15g bites work perfectly for my little-but-often fueling preference.

In the few 3hr + rides I’ve done over the last couple of weeks, I’ve already seen a great increase in my endurance and resilience on the bike. Being able to ride up mountains at an endurance pace makes for a much more enjoyable ride than slogging it out at the limits of my tempo zone every day! And I now have enough energy to crack into some good high intensity intervals the following days. Perhaps even better is that after 1500m+ of climbing I can now easily ride at or above threshold on the last 20 minute climb back up the hill to home, a climb I usually absolutely crawl up in the beating sunshine. To be able to not only hit peaks, but feel strong throughout a ride right until I reach the doorstep again is something I didn’t expect, but of course it makes absolute sense that when your fueling and hydration are right, you can go harder, longer.

Writing it down like this makes it sound like a straightforward journey, but it hasn’t been. Progress, for me at least, comes in fits and starts, and I have had my fair share of days wondering whether I was going to see any further improvement, and negatively comparing my current performance to what I’ve been able to do in the past. Even when I see improvements in one particular area, I often focus heavily on the other aspects that are, in my opinion, lagging behind. And of course, as with any situation where changing or tweaking a goal is involved, I often wonder whether I’ve chosen the right path. But when I get through the moments of doubt, it’s pretty clear to me that I’m building up towards one of the best seasons I’ve had on the bike in a few years – and possibly ever. With all the pieces of the puzzle coming together in the right way I’m feeling super motivated and keen to get back into racing. Restarting racing feels a bit daunting, and selecting a first race or series to commit to feels like one of the hardest parts – so I’m open to recommendations! In the meantime, I’m looking forward to continuing to build my performance outside in the spring sunshine.