That’s how you might describe the situation at the moment. As an athlete being part of historical moments of your sport normally is something to be proud of, a moment you try to cherish, but not this time. Very rarely have races been cancelled. Sport has this incredible power to bring people together and keep their moral high even during the hardest times of human history. Nothing stopped Tour of Flanders not even WW2. Loosing sport means loosing the last glimpse of normality. And right now we definitely lost normality.

During my cycling years I only had one race being cancelled due to extreme weather conditions. I would never have imagined (probably) half a year being cancelled. While I am sad that I won’t be able to do what I love most and I will probably go crazy staying at home for so long, the reasons why we got their makes it even more confusing and sad.

What makes the “he who must not be named” virus most dangerous is that we don’t know anything about it. How, when, why? We only know that by the end of the year it started messing around (officially) in China. Like really messing around. But by that time none of us would have thought it could potentially impact our own life. None of us. It now seems pretty clear that we all underestimated what happened on the other side of the globe. Unfortunately, like most of the times, we don’t see or try not to see, things that are far away, even if they look terribly bad and sad. This happened before and we still didn’t learn from our mistakes. I hope that we will learn our lesson this time even if I doubt it. I hope I am wrong.

When I look back at the last 2 weeks it seems unreal that some of us still doubted if we should or shouldn’t travel to Italy to race Strada. I always thought it was a stupid and irresponsible idea. Stupid because we would have helped spreading the virus and irresponsible because I think already at that moment the Italian medical system had different priorities then potentially having to look after crashed and injured riders. Personally I was convinced good sense from organiser, UCI and government would take over begin of the week. And then it didn’t. Some people were happy and looking forward to travel and race. I wasn’t. I didn’t feel comfortable with potentially exposing others when coming back home. By Thursday evening I decided not to go no matter the official decision. Fortunately my team had the same in mind. In the end my own personal decision was also a statement to the terrible crisis management at that moment.

This was all about the financial aspects and less about the teams or habitants safety. For legal and insurance reasons decisions were pushed backwards constantly, the UCI only suggested everyone should use his own pen, and the government’s reunion was taking super long. I can understand it took the government a while to take a decision (wake up they didn’t only had to talk about strada bianche that day…) but I am still disappointed to see how long it took to make a final decision. It felt like people lost sight of the bigger picture. 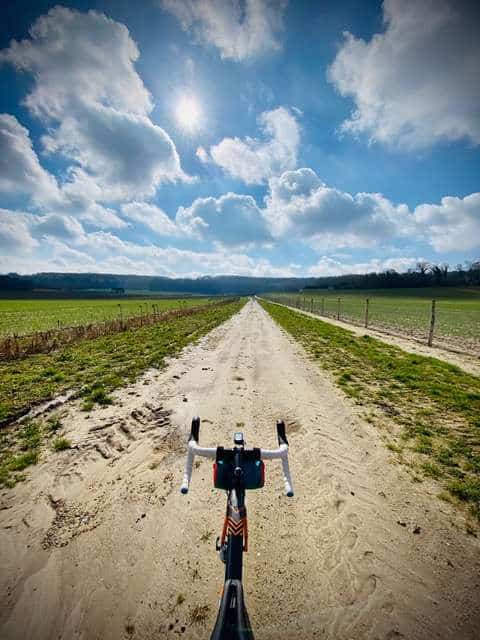 picture: enjoying my last rides outside

And we can say exactly the same about Paris-Nice. Why did that happened?

Apart from money ruling the world, we are also paying the price for living in a world full of fake news. Blinded by a huge amount of rubbish information and rumours over the past couple years, people seem to have lost trust. Trust into the media, trust into their politics. And when, in-between all the fake news, serious news shows up, we first don’t care. People still believe this might all just be a conspiracy from China against America or the other way around who knows and who cares. People still think it’s only a flu. People still think there is absolutely no worry, no rush, no need to follow instructions but the governments. People still think their own little comfort is more important then the health of everyone around them. People still go out having drinks with their friends while we get told to stay away from each other. “We want to enjoy one last drink” was something I heard a lot these last days. It drives me nuts seeing how selfish and stupid some of us are. Don’t be one of them!

Be one of the others! Humanity’s strength is to be able to adapt to any given situation. Working together, taking care of each other, putting our own ego and ambitions aside for a while, being a good person and encouraging citizenship is what we need right now. And I mean its probably what we need all the time anyway.

I am sad not to race. But I am not angry. I am not frustrated. It’s just the way it is. The better and quicker we act, the earlier we will be back racing. I know lots of my collegues feel the same. I also know some are more frustrated about the situation. Everyone of us did put in a lot of time, efforts and dedication to be ready for an Olympic season and seeing our goals disappear one after each other might feel unfair and painful. Not knowing anything about the future makes it even worse. Some of us are, right now, not even allowed anymore to ride outside. I estimate I have 2 or 3 rides left outside before France increases their security level once again. I know it will come and I am prepared for it. It won’t be easy but it isn’t easy for anyone. Think of all the people working day in day out at the hospitals, trying to safe lives, having to make probably terrible decisions, taking the risk to get infected themselves, to infect their family. Think of all the people that have lost or might loose a person they love. Think of all the people that might loose their job because their small business won’t survive the economical crises. Think of the politicians that have to take every day decisions you probably would never have the nuts to take. Think of all that and more and maybe you will understand that staying at home with your family riding your home trainer and doing virtual rides is probably still the best you could have asked for given the circumstances, even if I agree it might feel frustrating and long and your future might also somehow look unclear, but at least it is safe.

Everyone please, take care of each other. It matters!