This Saturday history will be made as the long awaited inaugural edition of Paris-Roubaix will unfold on the iconic pavé of Northern France.

It’s third time lucky for ASO as the first ever edition of Paris-Roubaix has been cancelled twice due to Covid-19.  However the postponements have only heightened the sense of anticipation and excitement over who will become the first ever female winner of the ‘hell of the North’.

Rolling out of Denain the riders will face 116 kilometres and 17 pavé sectors before finishing on the famous Roubaix Velodrome.  With the first sector beginning just after 20km the race will be relentless and a battle of attrition from the off.

A total of 29.5km – just over a quarter of the action – will be raced on the famed, bone-shaking cobbles of Northern France, including the legendary five star sectors of Mons-en-Pévèle and the Carrefour de l’Arbre.

The latter – Carrefour de l’Arbre – comes just 15km from the finish. Noted for the toughest, gnarliest and most brutal cobblestones in the race, this sector often proves decisive. Sapping the final remnants of energy from beaten and broken bodies, it often acts as a launch pad for those brave and strong enough to attempt a long range attack.

The finale will be played out in the amphitheatre that is Roubaix Velodrome; whether a sprint between the lead group or a lap of honour for a lone leader it is an iconic backdrop for the first ever female victor to raise her arms aloft. 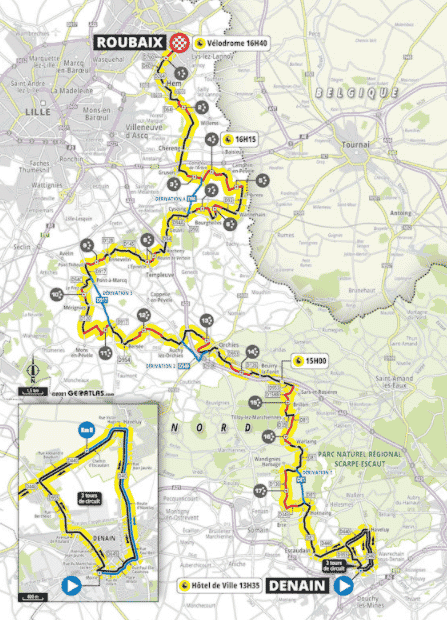 Sporting the purple jersey of the Women’s UCI WWT leader, Annemiek van Vleuten (Movistar), is just one of the many ‘headline’ names on the star-filled startlist. The 38 year old has dominated in her last three world tour appearances and regardless of terrain is always a rider to watch. That said, the Dutch woman has publicly stated her intention to ride in support of young teammate – Emma Norsgaard. The 22 year old had a fantastic spring campaign this year with numerous podium results and a win at Elsy Jacobs. Backed by a strong Movistar squad, the Dane will certainly be vying for victory.

As ever SD Worx bring an impressive squad to France and with strength in numbers they can dominate the front of the race at the crucial moments. With such talent amidst their roster they have options aplenty. Chantal Van den Broek-Blaak and Amy Pieters are favourites for a long-range attack, but should we see a small group come into the Roubaix velodrome, then Jolien d’Hoore and her track background could challenge in a sprint.

Rivalling the strength of SD Worx will be Trek Segafredo who will look to animate affairs and force selections with aggressive racing. Chloe Hosking, Lizzie Diegnan, Elisa Longo Borghini and the recently crowned European road and World TT Champion – Ellen van Dijk – are all set to take to the pavé of Roubaix and any one of those talents could bring home the win.

Canyon SRAM’s Tiffany Cromwell, and Kasia Niewiadoma will be a dynamic duo to watch too. Joined by sprinters Lisa Klein and Alice Barnes as well as Elise Chabbey and Ella Harris they too have a squad with many tactical cards to play.

Team DSM have yet to claim a world tour podium in 2021 and they’ll no doubt be looking to make amends courtesy of a monument win. If she survives the selections, the finish is perfectly suited to their Dutch sprinter Lorena Wiebes.

Fellow sprinter and newly crowned world champion – Elisa Balsamo (Valcar) – will still be riding the crest of the emotional wave that would have engulfed her since her Flanders win last weekend. Undoubtedly, the 23 year old will be motivated to showcase her new rainbow bands in style during their debut outing.

Kristen Faulkner (Team Tibco) has had a standout season in her first year as a pro and will also pose a threat. The Alaskan finished 3rd in Norway and 3rd in Plouay in August underlining the form and strength of the 28 year old. With confidence high, expect to see her looking for opportunities to attack in a bid to clinch victory from the peloton’s European stalwarts.

The Australian squad of Team BikeExchange also line up with strength in depth and will look to the likes of Amanda Spratt, Sarah Roy, Janneke Ensing and Teniel Campbell to animate the race.

No preview can be complete without the mention of Marianne Vos (Team Jumbo-Visma). The 34 year old has amassed 238 wins during her illustrious career, including 3 world titles. In her final season it would be a befitting ending if the Dutch woman could sign off with a monument victory as iconic as her own legendary status within the sport.

What: 116.4km Monument (Cobblestone sectors below)