After the white roads of Tuscany, the peloton heads to the Netherlands to tackle the flinten of Ronde van Drenthe. Find out all you need to know about the race in our preview.

Starting in the region’s capital, Assen, the 15th edition of the race will see the peloton tackle 156km on the demanding roads of Drenthe.

Winding through the northeastern region of the Netherlands the route comprises 10 cobblestone sectors and the marquee climb – the VAMberg. The so-called ‘rubbish dump climb’, the VAMberg, is a man-made hill atop a landfill. Whilst short – just a mere 400m long – it’s narrow, steep in sections (with gradients nudging the high teens) and paved with cobbles near the top. It’s no Mur de Huy but it’s certainly enough to splinter the bunch and gap riders. 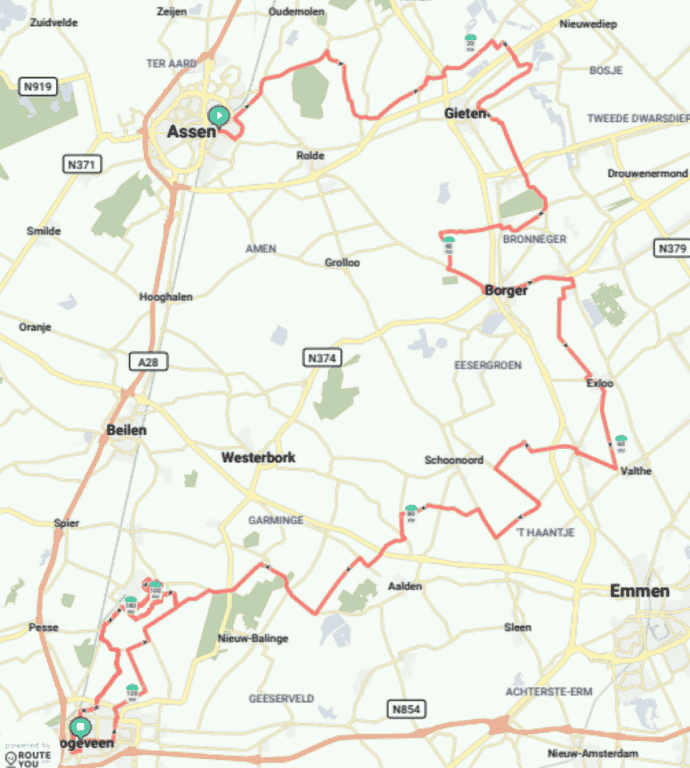 Leaving Assen the peloton will cover just shy of 86km before the first of 4 ascents of the VAMberg. The VAMberg may be the headline act, but the cobblestone sectors enroute to the climb will likely whittle down the bunch and provide the stage for the opening salvos.

Drenthe’s sectors are typically old forest maintenance roads through the region’s woods so the cobbles, or flinten as they are locally known, are coated with a slippery veneer of moss and are very uneven. Their unrelenting nature coupled with the chance of strong winds will make for aggressive and hard racing.

The final 60km of the race sees the bunch tackle the VAMberg 4 times in a series of loops around the finishing town of Hoogeveen. Expect to see a flurry of attacks as riders attempt to distance their rivals and gap the peloton’s sprinters. Cresting the VAMberg for the final time, just 14.2km remain so a thrilling run in to the finish line should be in store.

The course lends itself to the sprinters who can handle themselves on a climb – although a climber can sometimes get away like Lizzie Deignan (then Armitstead) did back in 2014. Generally, however, it is the fast finishers who thrive in Drenthe such as defending champion, Lorena Wiebes (Team DSM), who will be hoping to retain her title. Compatriot and teammate, Floortje Mackaij, will also be a rider to watch and she’s likely to race aggressively, potentially using the VAMberg as a launchpad for an attack.

Fellow Dutch squad – Team SD Worx – also bring a strong lineup to Drenthe and will look to play the numbers game again. Winner of Strade Bianche, Lotte Kopecky, will want to make it two World Tour wins from two and if she can repeat the powerful performance of last week she’ll prove hard to beat. Teammate Elena Cecchini will also pose a threat and having finished 2nd last year and in 2017, the Italian has a good track record at Drenthe. Breakaway specialists Christine Majerus and Marlen Reusser are also among the roster and will undoubtedly look for any opportunity to escape from the sprinters.

Canyon//SRAM Racing also line up with a strong team full of potential winners. With the likes of Elise Chabbey, Sarah Roy, Lisa Klein and Alice Barnes they have plenty of firepower to make it an aggressive race.

Elisa Balsamo, will spearhead Trek Segafredo’s challenge for the win. The 24 year old World Champion thrives in the Benelux Classics and the atritional nature of the course will play to her strengths. Teammate Chloe Hosking is another card for Trek Segafredo to play too. The Australian sprinter will be hoping she can hang on to the bunch over the successive climbs so that she has the opportunity to unleash her powerful finishing kick.

Another sprinter to watch is Marta Bastianelli (UAE Team ADQ) who has had a great start to the season with 2 wins already in the opening month of racing.  The 34 year old  Italian will be looking to repeat her winning performance of 2019 where she powered to victory in a three-up sprint against Chantal van den Broek-Blaak and Ellen van Dijk.

From the cobbles to the VAMberg, Drenthe is a race that is always ridden aggressively, and can just as easily end with a solo break or a small group of riders contesting the win. It will be an unpredictable and exciting race of attrition where only the strongest will triumph.