Stage racing continues this week as the World Tour peloton heads to the UK for the RideLondon Classique.

After Covid-19 enforced cancellations over the past two years, the RideLondon Classique returns in 2022 with a fresh look and a revamped format. No longer a one day circuit race, the 5th WT edition will see riders tackle two undulating stages in the county of Essex before a grand finale in the heart of London.

With hilly terrain, technical roads, and intermediate sprints (not to mention the ever unreliable British weather), we can expect dynamic and exciting action over the three days of racing. 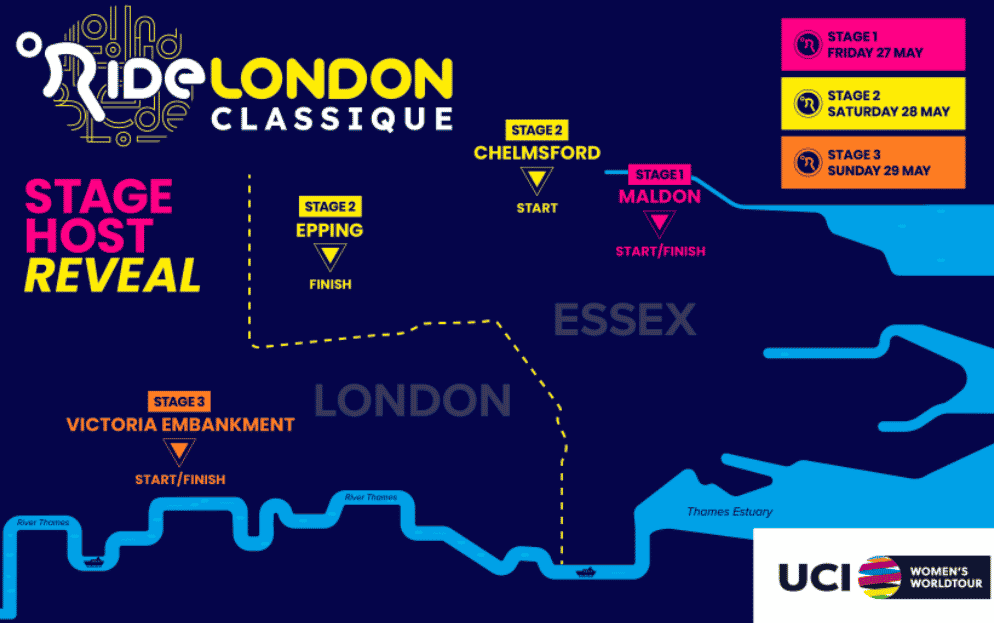 The opening stage starts and finishes in the ancient Essex town of Maldon. Heading north towards Colchester, the bunch will face two laps around the Abberton Reservoir including two ascents of Oxley Hill and Layer Breton Hill.

After heading back to Maldon, along open and exposed roads, the bunch tackle two laps of a tough finishing circuit. The lap includes a 2km long drag at 4% and a gnarly kicker up North Hill (300m at 8.2%), so it’s a course that suits the powerhouses. After cresting North Hill for the final time just 150m remain which should set up a thrilling finish.

The hardest of the three stages on paper, stage 2 is unrelenting with 8 climbs and 1368m of ascent. Starting in Chelmsford the route heads north towards Finchingfield and Great Dunmow before returning south for three laps of a finishing circuit around Epping Forest.

The finishing circuit is another demanding one with a hefty sprinkling of short, sharp climbs which should favour an Ardennes type rider. We can expect to see aggressive racing in this finale and there is certainly potential for some time gaps to form in the GC battle.

Similar to the previous one-day editions of the RideLondon Classique, the third and final stage is a circuit race in the centre of London. Starting and finishing on the Victoria Embankment beside The River Thames, the riders face two short (7.3km) laps and nine long (10.1km) laps of a circuit that includes some of London’s most famous streets. If the GC is still open, expect to see an exciting and tactical affair with every time bonus second being fought for.

‘RideLondon’ has a Benelux feel to it this year and we’re likely to see the classicists with their pure power and tactical nous prevail.

Belgium national champion and current WT series leader, Lotte Kopecky (SD-Worx), will head into the race as one of the favourites. The 26 year old has had a fantastic year so far with WT wins at both Strade Bianche and Flanders. Having grabbed a victory on the opening stage of the Vuelta a Burgos last week, Kopecky is clearly carrying her spring form into this next block of racing too.  Expect to see her vying for another WT win as she looks to extend her lead in the rankings.

Dutch rider, Lorena Wiebes will pin number one to her Team DSM Jersey as defending champion. The 23 year old powered to the win along The Mall back in 2019 in what was a dominant display of sprinting strength. Although this year sees the new 3 day format, the terrain still suits Wiebes, so she’ll undoubtedly be challenging for both stage wins and the overall in a   bid to defend her RideLondon title.

2nd in 2019 and 3rd in 2018, Elisa Balsamo (Trek-Segafredo) will be hoping she can finally stand on the top step of the podium this week. The World Champion has been in stellar form this season with three WT wins already in 2022. Can she add another to that tally this week?

Fellow Italian Marta Bastianelli (UAE Team ADQ) is another rider to watch. The 34-year-old classicist has had a solid season so far with 6 wins to her name as well as the overall at Elsy Jacobs. The nature of the stages play to her strengths so we can expect the former World Champion to be in contention throughout the three days of racing.

Team Jumbo Visma are likely to be led by American Coryn Labecki.  Former RideLondon (2017) and Women’s Tour (2018) winner, Labecki, performs well in the UK and the finales of all 3 stages should favour her fast, punchy kick. Teammate, Marianne Vos, will be looking to use the race to build up form after her Covid setback last month. Despite her lack of racing in 2022 and the recent bout of illness,  Vos can never be discounted when it comes to winning a bunch sprint.

Another rider to watch out for in a sprint finish is Movistar’s Emma Norsgaard. The 22 year old Dane won Le Samyn back in March and will be looking to take her first ever World Tour win this weekend. The demanding parcour and fast finishes suit Norsgaard well, so expect to see her in contention.

Other riders to watch include the British pair of Alice Barnes (Canyon Sram) and Katie Archibald (Ceratizit-WNT Pro Cycling) who will be motivated to ride well on home soil. Alison Jackson (Liv Racing Xstra) and Chiara Consonni (Valcar – Travel & Service) are also riders who are likely to be in the mix.