The longest, toughest and most reputed stage race of the year is upon us – The Giro d’Italia Donne.  Steeped in as much history and prestige as the mountain passes it summits, the Giro will see the stars of the sport vie for the coveted maglia rosa over 10 days of racing across northern Italy.

The 32nd edition of the race may have new organisers at the helm, but the 2021 route has all the hallmarks of a spectacular Giro and promises to deliver 1000km of dramatic and thrilling racing.

In keeping with recent tradition, the race opens on Friday 2nd July with a 26.7km TTT from Fossano to Cuneo in Piedmont.  After the TTT ‘aperitivo’, the opening weekend serves up an exciting feast of racing.

Far from a gentle introduction to the Giro, Saturday is in fact a key stage in the race with a mountain top finish at the ski resort of Prato Nevoso. The 20.7km finishing climb holds a steady 6% average gradient and will undoubtedly see the GC contenders trade blows on its gruelling slopes. Whilst the Giro won’t be won here; it could definitely be lost.

Sunday’s hilly stage with 4 classified climbs and numerous ‘bumps’ may be difficult for the peloton to control and will likely see a multitude of attacks. GC riders will need to be alert and the opportunist will need to bring their best legs.

There’s no respite for GC riders yet as Monday brings with it another important stage – the individual mountain TT. The mere 11.1km belies the difficulty of the climb and effort that awaits as riders tackle the 7-12% gradients up to Cascate del Toce.

The middle section of the race is likely to see the GC riders finally exhale a slight sigh of relief as the attention switches to the sprinters and those opportunists hunting stage wins. Stage 5 and 8 offer up pan flat kilometers from start to finish whilst stages 6 and 7 are more lumpy. Indeed the profile of stage 7 is akin to a Toblerone bar with 5 classified climbs and a further short climb up to the finish in Puenago del Gardo. 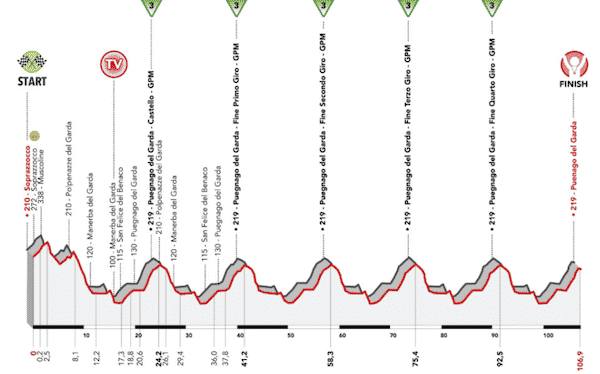 The penultimate and ‘queen’ stage of the Giro mirrors the previous Saturday with a challenging mountain top finish.  Having been preceded by a category 3 and category 2 climb, the final 14km (7.9%) ascent to the summit of Monte Matajur will provide the last major test for the GC riders. With the final 4km hovering at gradients near the 14% mark it promises to deliver some exciting racing.  Stage 10, the final of the Giro 2021, offers little in the way of an easy victory lap and instead serves up another hilly affair with 4 classified climbs enroute to the finishing town of Cormons. 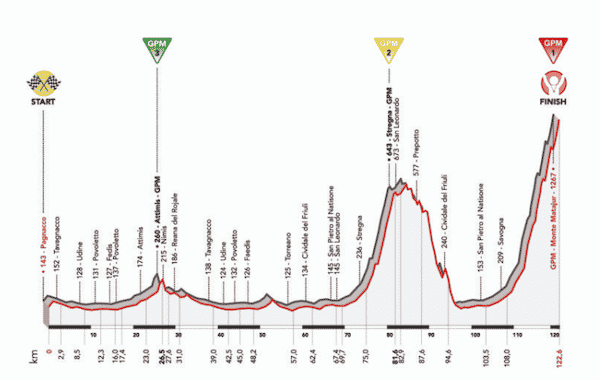 The scene has been set, but no plot is complete without its protagonists and as ever the Giro has a stellar line up. The only noticeable absentee is Annemiek van Vleuten (Movistar) who has eschewed the race to focus on her Tokyo Olympic preparations.

Defending champion Anna van der Breggen (SD Worx) will be looking to add a fourth pink jersey to her collection.  Whilst her primary goal is the Olympics, the Dutch woman undoubtedly heads to Italy as the pre-race favourite after an impressive season so far. In the final year of her illustrious career, she’ll be looking to sign off with another Giro win some 11 years after making her debut at the race.

3rd last year, current Italian road and TT champion Elisa Longo Borghini will lead the lineup for Trek Segafredo. Longo Borghini has achieved 7 top 10’s in her 9 Giro appearances, but so far the top spot has eluded the 29 year old. With the likes of Deignan, Winder and Brand riding in support of her GC ambitions, the Piedmont rider could very well don the maglia rosa on her home roads.

Kasia Niewiadoma (Canyon Sram) finished 2nd overall last year and will look forward to capitalising on the mountain top finishes. Winner of the white jersey in 2016, the Polish rider will be hoping to add a pink one to her ‘jersey wardrobe’ this year.

Winner of the mountains jersey at last year’s Giro, Cecilie Ludwig Uttrup will lead FDJ. The ebullient Dane finished 2nd in La Course on Saturday, so heads into the race with both form and confidence.

No Giro preview could omit the legend that is Mairanne Vos (Jumbo-Visma). Overall GC winner in 2011, 2012 and 2014, Vos will be looking to rekindle this GC form in 2021. The Dutch rider has amassed 28 Giro stage wins during her career so far and could very well add even more to this record-breaking tally.

Amanda Spratt will lead the GC assault for Team BikeExchange. The 33 year old from New South Wales has finished third twice and she’ll be hoping that 2021 is the year she can rise to the top step of the podium. Alongside Spratt, compatriot and teammate Grace Brown will also be up there. Brown has had a brilliant year in 2021 and with a stage win in the Vuelta a Burgos and 5th at La Course she’s proved she also has the climbing strength to match her classics form.

Donning the stars and stripes as the US national road champion Lauren Stephens (Tibco SVB) is also a rider to keep an eye on.  The winner of last year’s Tour de I’Ardeche is as shrewd as she is strong and could feature in the GC battle.