The World Tour peloton rolls into Belgium for the The Classic Brugge-De Panne this Thursday.  Find out everything you need to know in our race preview.

One of the longest one day races on the calendar, the fifth edition of The Classic Brugge-De Panne will see the field race 162.8km on the flat, exposed terrain of northwestern Belgium. 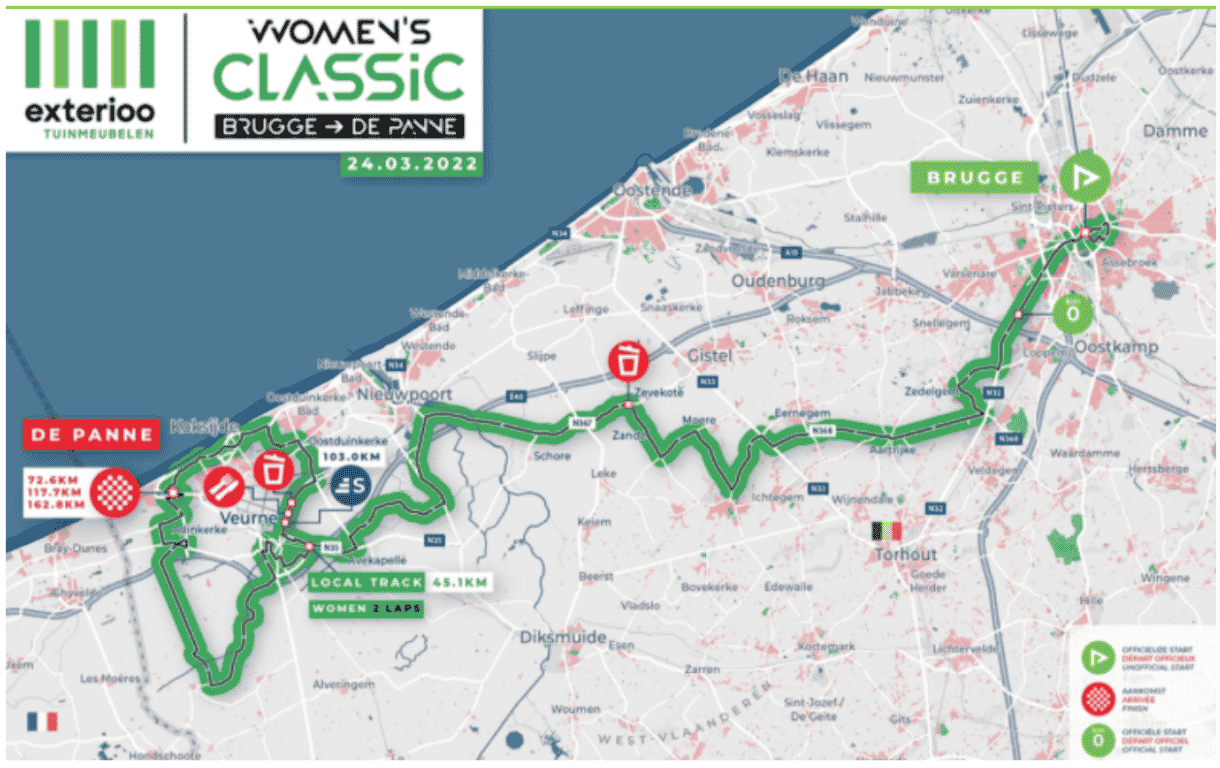 Starting in the historic Flemish city of Brugge, the peloton winds its way west towards the coastal town of De Panne along an opening stretch of 51km.

Upon entering the city of Veurne the riders then start the 2.5 laps of ‘local circuits’. At roughly 45km long, the fairly technical loop takes the peloton through Oostduinkerke, along the windswept North Sea shoreline of Koksijde, through De Panne and back round via De Moeren, Houtem and Bulskamp.

The flat, technical run in to the line from Koksijde to De Panne offers an ideal finish for the pure sprinters with a strong lead out train.

Three out of the past four editions of De Panne have culminated in a bunch kick so all eyes will be on the sprinters.

Winner in 2020 – Lorena Wiebes (Team DSM) – is undoubtedly the pre-race favourite. The peloton’s preeminent fast finisher has sprinted to a hat-trick of victories so far this month and is seemingly unrivaled in bunch kicks. With strength and discipline aplenty, her DSM teammates are likely to execute their well-drilled leadout which will make the 22 year old very tough to beat.

Twice third in this race Lotte Kopecky (SD Worx) will be hoping to finally win De Panne. After her sensational ride at Strade Bianche, the 26 year old Belgian will be full of confidence and undoubtedly motivated to clinch a World Tour win on home soil.

Emma Norsgaard (Movistar) is also a rider to watch and after her second place finish in 2021, she’ll be hoping she can go one better this year. The 22 year old Danish rider finished 2nd at Omloop van het Hageland and won Le Samyn des Dames earlier this month so can she continue her run of podium results?

With two wins to her name this year, Marta Bastianelli (UAE Team ADQ), is another rider who has had a great start to the season. De Panne is the only Belgian classic missing from her palmares, so the 34 year old former world champion will be hoping she is victorious this Thursday. The Italian is as shrewd as she is strong, so expect to see her navigate the crosswinds and technical roads well and position herself on Wiebes’ wheel in the finale.

Other sprinters to watch include Trek-Segafredo’s Chloe Hosking who was 2nd in the inaugural De Panne back in 2018,  Alison Jackson (Liv Racing Xstra) and Canyon Sram’s track specialist Shari Bossuyt.

Having said it will be a day for the sprinters, it’s no guarantee. With the exposed route along the coast, riders will be at the mercy of the buffeting North Sea winds so we can expect to see some echelons and splits in the bunch. Indeed, last year Grace Brown (FDJ), stunned the peloton’s fast finishers when she attacked inside the final 12km and held off the small chase group to solo to her first World Tour win.  Her victory may inspire the likes of SD Worx’s Marlen Reusser and World TT champion, Ellen van Dijk (Trek-Segafredo), to try a long range attack.