Five months on from the maiden Paris-Roubaix Femmes avec Zwift, the peloton heads back to the ‘Hell of the North’.

Rolling out of Denain the riders face 124.7 kilometres and 17 pavé sectors enroute to the famous Roubaix Velodrome.  The first sector – Hornaing to Wandignies – comes 40km into the race and from there it will be a relentless battle of attrition. Indelibly inked into the history books, some 82.5km from the line, this sector was where Lizzie Deignan escaped from the bunch last year and soloed to the inaugural Paris-Roubaix Femmes avec Zwift win. 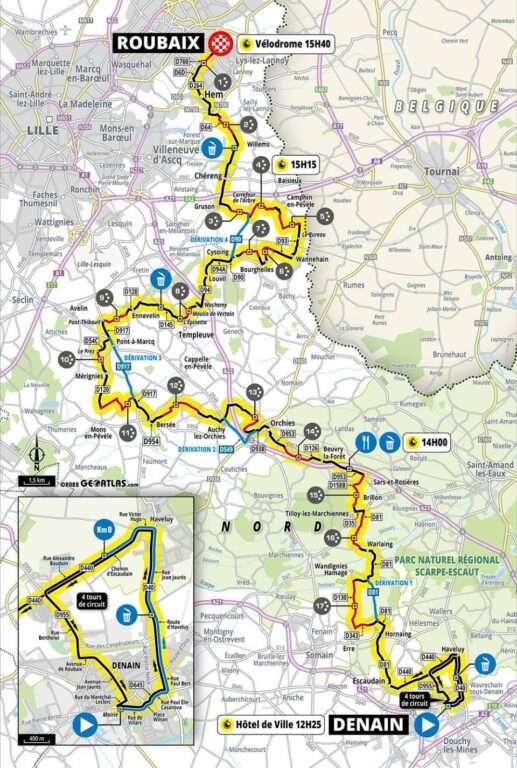 In a race that takes its toll like no other, a total of 29.5km – just over a quarter of the action – will be raced on the famed, bone-shaking cobbles of Northern France. Attention will centre around the two toughest sections of pave – the legendary five star sectors of Mons-en-Pévèle and the Carrefour de l’Arbre – which are likely to be pivotal to the outcome of the race.

The latter – Carrefour de l’Arbre – comes just 15km from the finish. Noted for the gnarliest and most brutal cobblestones in the race, this sector could prove decisive. It may quash victory hopes if riders are distanced, but at the other end of affairs, it can be a launch pad for those brave and strong enough to attempt a long range attack.

The finale is played out in the amphitheatre that is Roubaix Velodrome. Whether a sprint between the lead group or a lap of honour for a lone leader, it is an iconic backdrop for the worthy winner to raise her arms aloft.

In a race that requires both fortune and fortitude in equal measure we can expect to see the teams with strength in depth rise to the fore.

The Italian team of Trek-Segafredo brings such strength and power with their champion’s-jersey-cladded squad. World Champion and World Tour leader, Elisa Balsamo lines up alongside current double Italian Champion, Elisa Longo Borghini as well as European Road and World TT Champion – Ellen van Dijk. Lucinda Brand, Audrey Cordon-Ragot and Lauretta Hanson are also set to take to the pavé of Roubaix and any one of these six talents could bring home the win.

Rivalling the strength of Trek Segafredo is SD Worx who, as we have seen so often this year, will look to animate affairs and force selections with aggressive racing. Chantal Van den Broek-Blaak, Marlen Reusser and Christine Majerus are favourites for a long-range attack, but should we see a small group come into the Roubaix velodrome, then Lotte Kopecky will certainly be a favourite in a sprint. Kopecky has had a great season so far with two World Tour wins to her name – can she add another victory to this tally on Saturday?

Canyon SRAM’s Tiffany Cromwell and Kasia Niewiadoma will be a dynamic duo to watch too. Joined by sprinters Shari Bossuyt and Lisa Klein as well as Alice Barnes and Elise Chabbey they also have a squad with many tactical cards to play. Similarly, FDJ also have a lot of firepower amidst their roster with the likes of Amstel Gold winner Marta Cavalli, Brodie Chapman and Grace Brown, who will all look to race aggressively.

As ever, Marianne Vos (Team Jumbo-Visma) heads into the race as a rider to watch. The 34 year old has amassed 238 wins during her illustrious career, including 3 road world titles. After her 2nd place finish in the inaugural edition of the race last October, can she go one better this weekend? Teammate Coryn Labecki will also pose a threat if she survives the selections. As the first American to win Ronde van Vlaanderen, could she make history again by becoming the first American (male or female) to win Paris Roubaix?

Team DSM will likely look to protect their Dutch sprinter Lorena Wiebes. The 22 year old has had a great start to the season and will look to add another victory to her tally of 4 wins so far this year. If she can make it to the velodrome with the leaders she’ll prove hard to beat in the finale.

What: 124.7km Monument (Cobblestone sectors below)