This Sunday the much-anticipated Olympic Road Race will unfold on the roads of Tokyo. In the land of the rising sun, who will climb to Olympic ascendency?

Rolling out of the Musashinonomori Park of Chofu the peloton will head southwest through the western suburbs of Tokyo and towards the picturesque countryside of the Kanagawa Prefecture.

After 40km, the riders will hit the long and steady ascent of Doushi Road. Although marked as one single and steady 40km climb, the pine and cedar lined road does in fact rise and fall more than the profile suggests. The first half of the climb is punctuated by several short ascents and descents whilst the second half rises at a more gradual 3-5% with much steeper pitches nearer the top. A hairpin bend followed by the arrival of the Yamabushi Tunnel marks the climb’s summit and the highest point of the race at 1212m.

After a short descent, the bunch will arrive at a plateau and the spectacular Lake Yamanaka – the largest of the Fuji Five Lakes. With the iconic Mount Fuji providing a stunning backdrop the race then heads to the second and steepest climb of the day – the Kagosaka Pass.

Cresting the 2km pass at 96.8km the ensuing 20km descent will then drop the riders down into the entrance of the Fuji International Speedway where the finale will be played out over 1.5 laps and 17.7km of the undulating motor circuit. With one of the longest straights in international motorsport (1.5km long), the speedway area could set up a dramatic finish should there be a repetition of the nail-biting pursuit we saw in 2016.

Whilst many have expressed disappointment that the women’s course omits the slopes of Mount Fuji and Mikuni Pass, the 137km route still looks prime for aggressive and exciting racing. With a total of 2692m of climbing and the motor circuit finale, the race is likely to suit the puncheurs and those climbers with a fast finish. 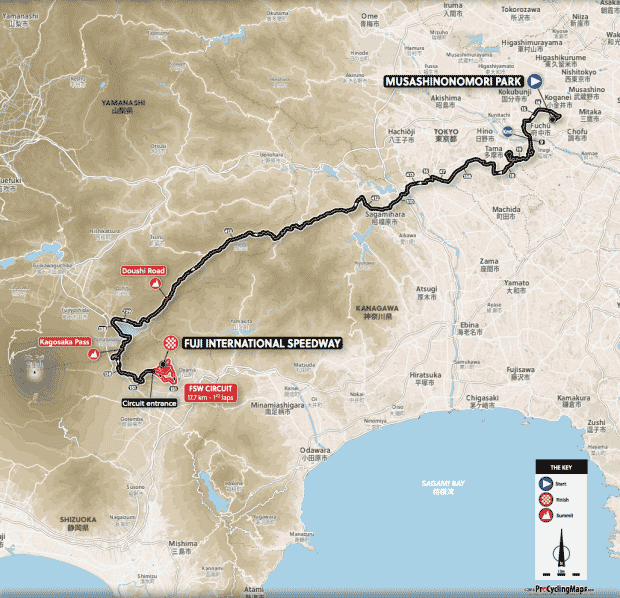 All eyes will be on the Dutch team of Anna van der Breggen, Marianne Vos, Annemiek van Vleuten and Demi Vollering – any of whom could win. Together the 4 riders have amassed a staggering 380 career victories, 5 world championship road race titles, 7 maglia rosa jerseys and two Olympic road race golds.

Defending Olympic champion and current world champion, van der Breggen comes to Tokyo fresh from her recent Giro win. She’s been in imperious form all year and at times has simply looked unbeatable – can she become the first woman in history to take back to back wins in the Olympic road race?

Arguably, van der Breggen’s nearest challenge will come from within her own team. Indeed, winner of the rain-soaked road race of London 2012, Marianne Vos, is back to her best this year and will be hoping the race comes down to a sprint. The 34 year old took 2 stage wins at the Giro earlier this month, adding to the Gent-Wevelgem and Amstel Gold victories that she took in Spring.

Meanwhile, an Olympic medal is the only missing entry in Annemiek van Vleuten’s impressive and ever-lengthening palmares. After her horrific crash in Rio, the 2019 world champion will be hoping for a result befitting of her already legendary status within the sport. The Doushi Road climb suits her well and looks ideal for a long-ranging and ‘trademark Annemiek’ attack.

Not to be overlooked, the youngster of the team, 24 year old Demi Vollering, is also very well suited to this course. 3rd overall in the Giro, winner of Liege-Bastogne-Liege and La Course in 2021 she’ll be a rider to watch, especially if the race comes down to a select group sprint.

With a 4 rider strong line up of Chloe Dygert, Coryn Rivera, Ruth Winder and Leah Thomas, Team USA will be looking to upset the Dutch dominance. The last time an American featured on a women’s Olympic road race podium was back in 1984 when Connie Carpenter-Phinney and Rebecca Twig went 1st and 2nd respectively in Los Angeles. Some 37 years later, with a course well suited to their team’s strengths, they’ll be hoping they can bring back a medal.

Another nation with 4 riders is Italy who will be led by Elisa Longo Borghini. 3rd in Rio in 2016 the Italian is certainly a climber to watch and after a disappointing Giro she’ll be motivated to make amends and bring home another Olympic medal. Joined by Marta Cavalli, Soraya Paladin and Marta Bastianelli, they’ll look to play the numbers game on the roads of Tokyo.

Representing Great Britain, 2015 world champion, Lizzie Deignan, will be looking to add a gold medal to the silver she won on home soil in 2012. 5th in Rio, the Yorkshire woman, may have had a slow start to the year, but she looks to be finding her best form at the right time. Victory at the Tour of Suisse and 4th overall at the Giro, Deignan (who only has one rider – Anna Shackley – for support), will be hoping to upset the bigger squads.

Kasia Niewiadoma of Poland favoured a pre-Olympic training block over the Giro and she’ll be hoping that this preparation pays dividends on Sunday. The 26 year old has had a relatively quiet year by her high standards, but no doubt she’ll be looking to improve on her 6th place from Rio.

Australia also brings a strong squad to Tokyo with their line up of Amanda Spratt, Grace Brown, Sarah Gigante and Tiffany Cromwell. Brown and Spratt are likely to lead the Aussie charge this weekend and expect to see them race aggressively particularly on the two climbs.