Soaking up the down time

It’s been a little over four months since I arrived in Europe. After a hectic first half of the season, with plenty of racing, some crashes, and a stint at altitude in beautiful Andorra, I’m now just under halfway through my break before the second half of the season begins.

I really enjoyed racing the first half of the season. I raced 3 classics, 4 tours, so overall 20 race days, not including the races I did in Australia before arriving here. Lots learnt, but I know I have a lot more still to learn. It’s all a work in progress, but I feel like I am in the right direction and have the right people leading me there.

Regarding the crashes, I crashed three times, three races in a row. The first crash not being that bad, just a couple of bruises. However, the following two crashes beat me up a bit, both physically and mentally. I didn’t break any bones but managed to take a lot of skin off and break two bike frames. The first bad crash was in Valencia. I managed to finish the stage but DNS’d the next and final stage due to the pain I was in. The following crash was in Thuringen, on the second stage of a six day tour. I found it really hard to get back up and keep racing but I knew I had to – it’s a part of racing that we have to deal with and move on. Apart from a stubborn left pinky finger that won’t seem to return to a normal size, I am all healed up now.

I went to Andorra for a few reasons. One was for the altitude gains, another was because I had heard great things about it and I had never been there, and also because my friends were going. I can confirm, it is beautiful by the way! I stayed with two of my Australian friends, and we were there for 17 days. We stayed in Soldeu, which is at 1800m elevation, so we got the altitude benefits. 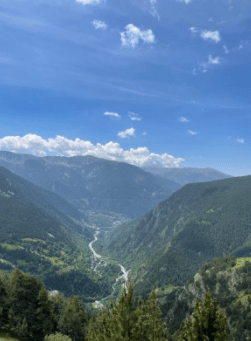 I have really enjoyed this rest at my Girona home, with my boyfriend. The time at home has allowed me to do things I don’t normally have so much time to do. We moved into a new apartment, and Girona now feels like a home away from home! On the bike, I’ve been enjoying many adventure rides. These are  rides  where  you don’t think about watts or speed, you just ride to explore new roads and routes with a sense of adventure!

Off the bike, I’ve really enjoyed cooking during this downtime! My teammate, Ella Harris had her birthday recently. No better way to celebrate a birthday than with cake! We (my boyfriend and I) decided on baking a hummingbird cake, inspired by one of Girona’s most loved cafes, La Fabrica. If you’ve never had a piece, or two, of hummingbird cake, you have to try it! We used the exact recipe that La Fabrica uses; the recipe is listed below. I don’t want to toot my own horn….but, ours was pretty darn tasty! Pleasing to the eye, and the stomach! If you like cake (and who doesn’t?!), and enjoy baking, you won’t be disappointed!

Thanks for following my cycling journey.

Add eggs and oil, stirring until dry ingredients are moistened. Do not beat. 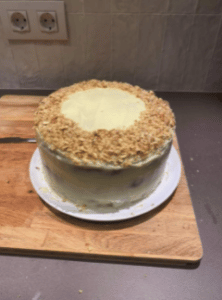 In a medium bowl, mix together the cream cheese and butter until creamy.

Mix in the vanilla.

Gradually stir in the confectioner’s sugar.

Store in the refrigerator until ready to use. 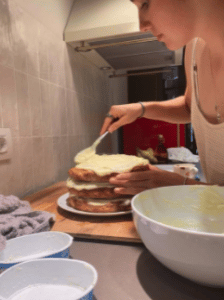