The Classics season closes in style this Sunday with Liège-Bastogne-Liège set to provide an exciting finale to a fantastic block of spring racing.

The youngest Ardennes Classic, the sixth edition of Liège-Bastogne-Liège, will see the peloton tackle a familiar 142.1km route on the punishingly hilly roads of Wallonia in southern Belgium. 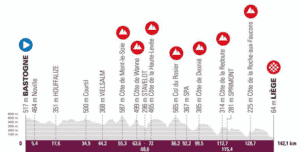 Starting in Bastogne, the bunch head north over undulating Ardenne terrain enroute to the industrial town of Liège. 53km into the race the first of 7 classified climbs – the Côte de Mont-le-Soie (1.7km / 7.9%) – arrives, dropping the metaphorical flag on the ensuing war of attrition.

Roughly 10km later the strength-sapping Côte de Desnié (1.6km / 8.1%) is faced before a fast descent drops the peloton into the Amblève Valley and onto a pivotal phase of the race. A technical and twisted approach leads into the famed (and feared) Côte de La Redoute (2km / 8.9km) whose steep, narrow slopes have twice provided a launch pad for winning solo moves.

Cresting la Redoute, 35km remains, and the race is likely to be in pieces.  More undulations offer little chance of respite and 15km later the final classified ascent of the day is tackled – the Côte de la Roche-aux-Faucons (1.3km / 11%). However, this unrelenting course continues to climb and cruelly teases tired legs with two more 1km ascents – the first at 3.6% and the second at 6.2% – rearing up.

Only with around 10km to go will the riders finally descend into Liège with the final few kilometres playing out of the flat town centre roads.

Dutch riders seem to have a natural affinity with the Ardennes Classics and, despite its tender age, Liège is no different with four out of the five previous winners all hailing from the Netherlands. With the strength in depth of the peloton’s Dutch contingent, we may well witness this Netherlands-winning-trend continue on Sunday.

Defending champion, Demi Vollering (SD-Worx) is in scintillating form and will be hard to beat if she can make it over the final ascents with the climbers. After a second at Amstel Gold and a third at Flèche Wallonne, Vollering will be keen to finally stand on the top step of the podium this weekend.  Teammates Ashleigh Moolman Pasio and Niamh Fisher-Black (who was recently interviewed on our brand new Podcast series – Here Comes the Future empowered by Liv) also pose a threat particularly on the steep slopes of the Ardennes’ côtes.

Annemiek van Vleuten (Movistar) has stood on every step of the Liège podium and there’s no doubt that the 39-year-old will look to repeat her emphatic 35km solo win of 2019. The course suits her well and encourages the long ranging ‘trademark Annemiek’ attacks. After narrowly missing out on the win at Flèche Wallonne on Wednesday, there’s no doubt van Vleuten will be keen to go one better this time round and bring home her first World Tour win of 2022.

Looking to upset the Dutch dominance will be FDJ who will line up with the likes of Grace Brown, Brodie Chapman and Marta Cavalli. With such a strong roster they have plenty of tactical options and will certainly look to animate the race. Back in 2020 we saw a thrilling pursuit over the final kilometres between Grace Brown and Lizzie Deignan. Having just missed the win that year, can Brown rise to the top spot in 2022? Queen of the Ardennes – Marta Cavalli – is in a rich vein of form and after winning both Amstel Gold and Flèche Wallonne, she’ll undoubtedly be motivated to complete the ‘triple crown’ on Sunday.

Trek-Segafredo are another squad with plenty of firepower amidst their roster. They’ll likely be led by last year’s third place finisher Elisa Longo Borghini who will again pose a significant threat. Joining Longo Borghini is likely to be Lucinda Brand, Ellen van Dijk and Leah Thomas – all of whom could challenge for the win.

Canyon//Sram’s Kasia Niewiadoma also heads into the race as one of the favourites. The Polish rider thrives on Wallonian roads and will relish the difficulty of the successive bouts of steep ascents. Can she make it into the top 3 this weekend?

Where: Bastogne to Liège, Belgium