Hi everyone, I’m Jenny. I’m the mum of two teenage daughters and a newcomer to the sport. No one was more surprised than me to learn that I’d been picked to be part of the Vox Performance Project.  In fact, it took me several reads of the email to believe it. After the initial surprise, panic set in. How could they have picked me – were they mad??  What had I written on my application!?  I hadn’t kept a copy so I genuinely didn’t know!

Emails started to come my way from both Voxwomen and the sponsors of the project, Zwift, Precision Hydration and Supersapiens.

And then the products.  First, the sensors for continuous glucose monitoring arrived, courtesy of Supersapiens.  I’d read the blurb about what it could mean for my training and was super excited by the possibilities it offered. A light came on when I saw the sensors – I’d seen a few attached to the arms of participants in triathlons but not really thought about what they were or why these athletes might be wearing them. Honestly, I was slightly afraid when it came to applying the first one to my arm. Finally I steeled myself, convincing myself I was brave, which to be fair, I was.  Surprisingly it didn’t hurt at all – it was certainly less uncomfortable than having a vaccination… I was terribly conscious of wearing it at first – worried I was going to bang it or knock it off. But eight weeks in, I barely notice it’s there and applying a new sensor holds no fear now.  The Supersapiens team have been so supportive and patient, explaining how to interpret the readings and dealing with any technical issues including how to manage changing phones and getting my history from one to the other!

I’d already been using Zwift a huge amount since May 2020, no prizes for guessing why  except no one would really have expected it of me. I hadn’t been on a bike for probably 25 years and never done any sort of ‘serious’ cycling – riding a bike was purely a mode of transport for seven years while I was at school and uni.  My sport was rowing with a bit of climbing and shooting thrown in. Latterly I’d been doing a bit of running, by myself to start as I was ‘too slow’ to run with/near others!  Then I discovered Parkrun which I loved (competitive me to the fore) and I started doing more running offroad. Unfortunately, trail running hurt my hip and so I stopped.  I could’ve used the treadmill but that was just so DULL. 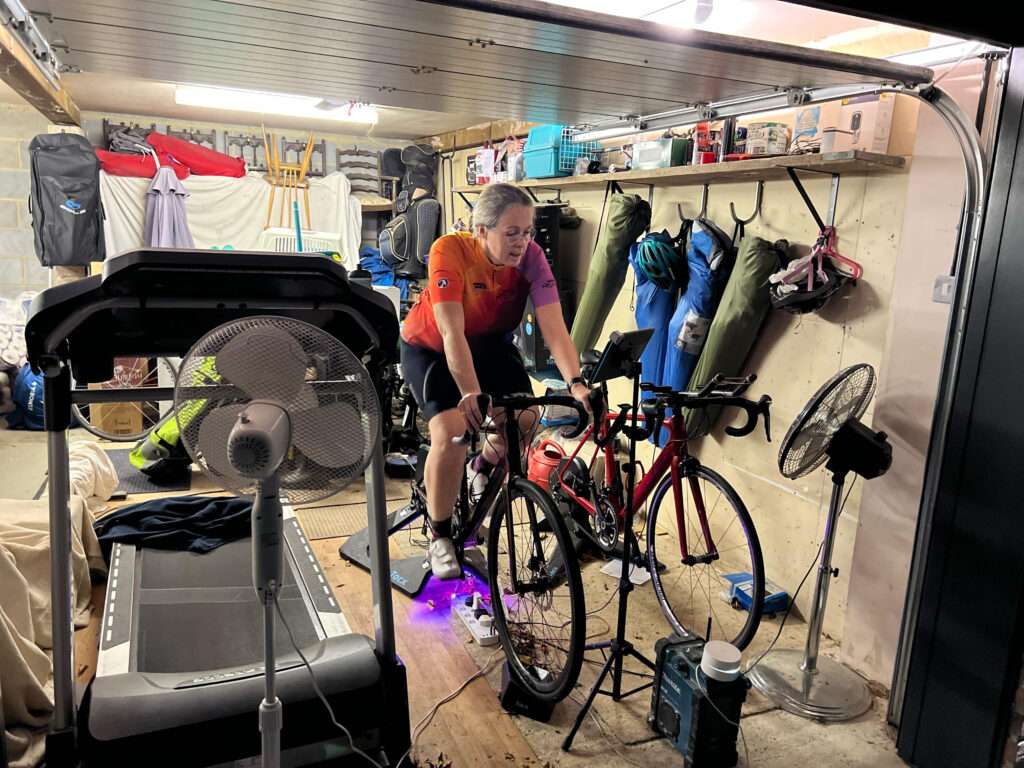 I struggled at first using Zwift.  I was too shy, or do I mean self-conscious, to join in a group ride and NO way was I going to race.  Oh, and I was using my husband’s old bike with a vintage, leather saddle. It was like perching on a knife edge.  Literally.  Suffice to say that didn’t last long and it was soon swapped for something more ‘appropriate’. I completed some of the Zwift training programs to make me feel that I was no longer a true beginner and then ventured into group rides. After some trial and error, I found PACK rides. They are truly brilliant! The yellow beacon actually rides at the advertised pace and their sweepers are so kind, coming to find you and then dragging you back to the bunch and never a cross word spoken. Except maybe to those who can’t help themselves and insist on treating every outing as a race, disappearing right from the start never to be seen again!

I also started to run on Zwift, after all, the treadmill doesn’t have camber so it didn’t hurt my hip.  I joined some group runs, completed the Zwift academy running as well as cycling programmes and improved. Then I found a virtual Parkrun on a Saturday morning and thought why not? I crept in at the back, kept my head down and just ran. The chatter was infectious though, and I so appreciated everyone cheering me on, that I couldn’t resist, and I had to join in. My typing while running isn’t that good so I didn’t say a lot but I made the effort as I knew how much of a difference it made to me.

A while later I was approached to join a ladies (cycling) racing team, RAVE. Again, seriously?  I considered it, then decided why the heck not, I’m in! I then bugged the team captain to give me a ride, which eventually they did, and I was hooked. In the most recent ZRL series I was captain of our EMEA D team and we made it through to the playoffs having come 2nd in our division. We came 7th out of the 9 teams participating and I couldn’t be prouder of my team. They have been brilliant – all juggling work, families and racing (some dealing with time zones as well) – always with a smile in their voices and, when we’ve video called in, even on their faces!  Of course, some of the team are grading up to C and others have to dedicate some time to their work/families/real lives, so we’re looking for recruits if anyone is interested… 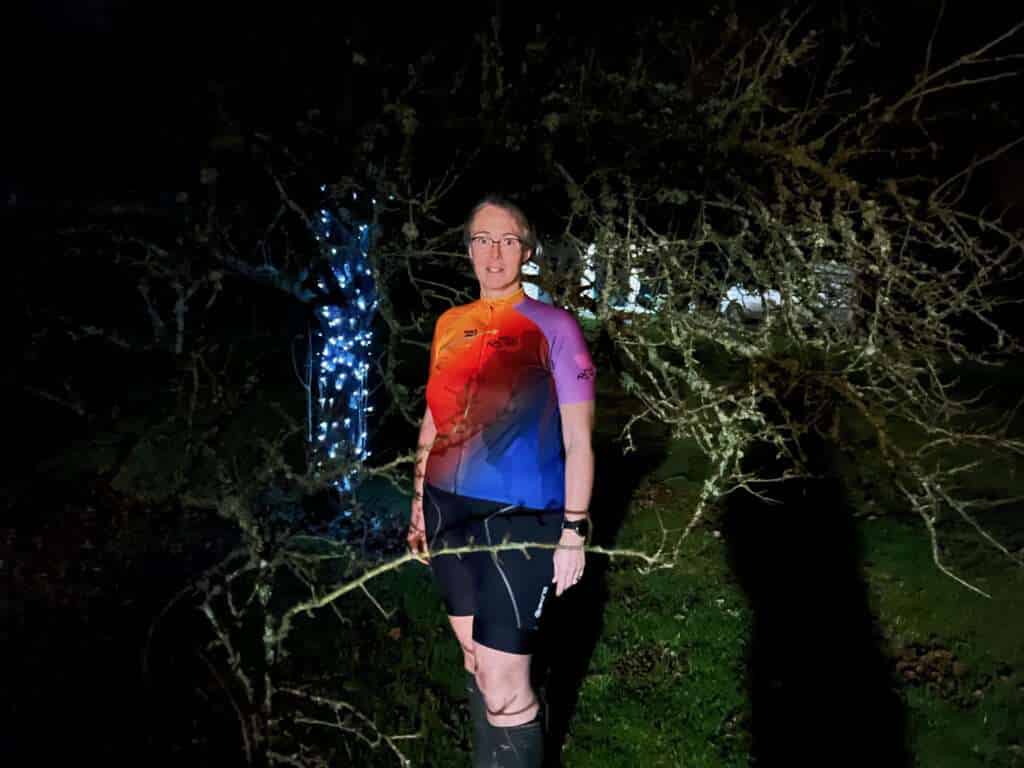 I’m loving the fact that Zwift are part of this project as I’ve so enjoyed becoming part of the community over the last nearly two years and now I can say I’m a Zwift VOX ambassador!

Precision Hydration sent an invitation to complete their sweat test (sounds delightful, no?).  Not as awful as it sounds, but you do have to classify how much you sweat.  Would you classify yourself as being ‘very sweaty’?

A guide on which products to try followed and I duly ordered my starter pack. I was quite cynical to begin with – if I eat properly, how can drinking some funny flavoured water make any difference? Still, I’ve always tried to teach my children to be open minded about things, so I decided to do as I was told in the trial plan and see what happened.

I came up with a few challenges, not least of which was trying to have enough screens open while riding so that I could see Zwift, Zwift Companion, use Discord to chat (does grunting count as chatting when racing?) and see the Supersapiens app to monitor my glucose levels (hint – turn off the setting on your phone where it auto locks after 2 mins). I’m still very much working on my fuelling strategy but what I have found is that at least trying to do it properly really does make a difference. The last of the ZRL playoffs had me racing for nearly 2 hours and although my fuelling wasn’t quite right I managed to get a Glucose Score of 59 (100 perfection) and I spent 12% of my time in the Glucose Performance Zone (target is 100% so, still some work to be done there on setting it right for me!).  Although not bad, I wasn’t sure it was that brilliant really, so I thought I’d try an experiment.  The lovely Holly Seear set up a recovery group ride for all of us on the VOX Performance Project a few days later, so I didn’t bother worrying about fuelling and reverted to my old standard of just drinking water during the ride. Suffice to say over the 45 mins of this gentle and friendly ride, I managed a Glucose Score of 11 and spent 0% of the time in the Glucose Performance Zone!  Point proven I think, and I am now a convert to the importance of fuelling.  Having been converted I now need to perfect the art, which will include understanding why cornflakes and milk send my glucose levels soaring while pretty much nothing else (including flapjack and chocolate) has quite the same effect!

I know it’s not the point of the project but I’m also finding it very interesting to view my glucose levels when I’m not exercising and seeing just how closely feeling low and lethargic relates to drops in my levels.  Can I learn to manage my levels better by just listening to how my body feels?  Watch this space!

I don’t have any great training goals set for myself, other than to enjoy my riding, remain fit and encourage as many other women as possible to just give it a go – you’ve got nothing to lose and potentially loads to gain.  Oh, and to return to running again after my foot surgery later this week.