This Friday the peloton heads to Spain for the first World Tour stage race of the year.

The inaugural ‘Itzulia Women’ comprises a trio of relatively short but relentlessly undulating stages across the mountainous terrain of Northeast Spain. Featuring the notoriously steep climbs that are synonymous with the Basque (or Euskadi) country, the race promises to be an exciting and dynamic affair which is likely to see the peloton’s climbers rise to the fore. 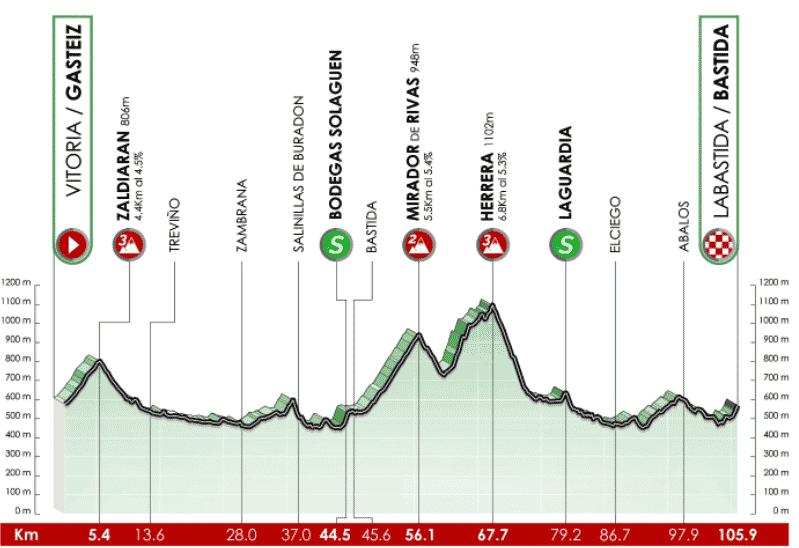 Halfway into the stage, the duo of Mirardor de Rivas (5.5km / 5.4%) and Herrera (6.8km / 5.3%) are likely to whittle down the bunch and the latter could provide a launch pad for some damaging attacks. Following the 12km descent off Herrara, the course continues to undulate enroute to the finish in the medieval town of Labastida. With several climbs, descents and technical roads in this stage, we can expect to see some early time differences and, whilst not conclusive, some order in the General Classification (GC).

Starting and finishing in Mallabia, the circular loop of stage two features 6 classified climbs (5 Cat.3 and 1 Cat.2) and could be a day for the break. The unrelenting nature of this hilly and roller-coaster-like parcour lends itself to unpredictable racing which may prove tough for the leader’s team to control. 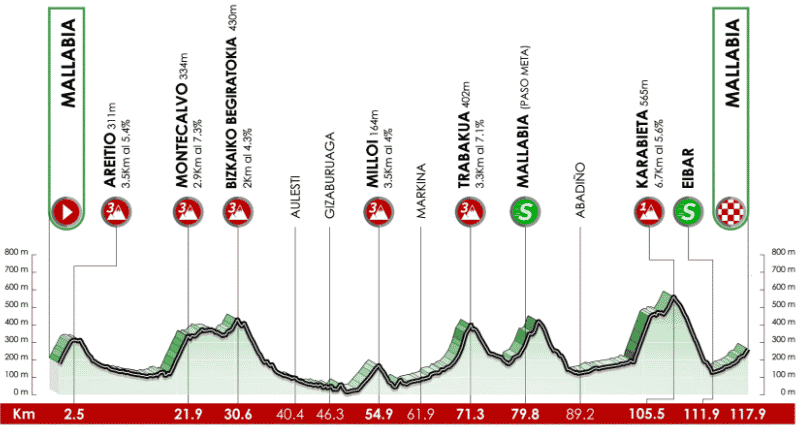 The final classified climb of the day – Karabieta (6.7km / 5.6%) – summits with just 12km to go and may be decisive in the battle for the stage win. That said, the racing isn’t over once the Karabieta is crested; after a quick 6km descent, the riders face a demanding finish with an unclassified yet steep ascent into Mallabia. The double digit gradients here will inevitably see some time gaps form towards the line.

The third and final stage is arguably the most demanding of the three days. In a carbon copy of the San Sebastian Classic route, stage three will provide an exciting finale to the tour. Notable ascents include the notorious Jaizkibel pass (7.9km / 5.6%) and the infamous ‘Wall’ of the Murgil Tontorra (2.1km / 10.1%).

The Murgil is brutal with the final 500m pitching up at punishing gradients of over 20%. With such a vicious climb in the last 10km, we could potentially see the GC battle being decided in these last moments of racing.

Racing in the Basque country is predictably unpredictable at the best of times: the weather, the hills, the technical roads – they all combine to induce thrilling action. Throw into that mix the fact that ‘Itzulia’ is the first race back following the ‘post-classics’ interlude and that the peloton’s main protagonists are likely using it as a preparation race, and it’s fair to say we can expect some exciting and potentially ‘unscripted’ racing.

That said, with 13 classified climbs in 3 days, the peloton’s climbers are likely to be at the head of affairs and animating proceedings. Not least, SD Worx’s duo of Ashleigh Moolman Pasio and Anna Shackley, both of whom will look for chances to attack when the road tilts upwards. Moolman Pasio, is always a threat in the mountains and the 36 year old South African will be hoping she can clinch her first win of the season this week.

Ardennes stand out – Marta Cavalli (FDJ) – will look to continue her excellent run results. After her win at Amstel Gold and La Flèche Wallonne, the 24 year old Italian will look to add another World Tour victory to her 2022 tally. Teammates Cecilie Uttrup Ludwig and Brodie Chapman will also be riders to look out for and they provide several tactical cards for FDJ to play. Uttrup Ludwig was 2nd in the Valenciana stage race back in February and with Covid hopefully behind her, she’ll relish the opportunity to be able to use her climbing prowess in the Spanish mountains once again.

Canyon//Sram’s Mikayla Harvey is another young climber who will be vying for the win. The 23 year old won the 2020 Giro Young Rider competition and typically thrives in hilly terrain. Joined by the likes of Soraya Paladin and Elise Chabbey, Canyon//Sram also have plenty of options when it comes to stage wins and the GC battle.

Trek Segafredo’s Leah Thomas may also pose a threat. Winner of the notoriously tough and unrelenting Tour de l’Ardèche last year, the Californian will be looking to add another leader’s jersey to her collection this week. Teammate Lucinda Brand is another rider who will be in contention for stage wins. Winner of the polka dot jersey at last year’s Giro and former winner of Thuringen and the Tour of Norway, Brand is both experienced and adept in demanding stage races.

Riding on home soil – Mavi Garcia (UAE Team ADQ) – is another rider who could challenge for both stage wins and the overall GC. 5th in last year’s Giro, Garcia is a strong all-rounder, who is bound to race aggressively.

Fellow Spaniard Ane Santesteban (Team BikeExchange-Jayco) and teammate Amanda Spratt will also be in contention for GC placings. The diminutive Basque climber, Santesteban, rides well in the mountains and will undoubtedly be motivated to put in a strong performance in her home region. Meanwhile, Amanda Spratt, is building up form following her Iliac Artery Endofibrosis surgery in the winter break. The 34 year old Australian may not be back to her very best just yet, but we can still expect to see her pushing the pace on the climbs.

Where: Basque (or Euskadi), Spain

Thank you for visiting Voxwomen. Our aim is to support and develop women’s cycling. If you liked what you just read, please consider making a small donation. If this is a blog your donation will be split 50/50 between the rider that wrote the blog and Voxwomen to create more content. Thank you for being part of the journey and supporting the sport.