The Belgian block of racing continues this Sunday with Gent-Wevelgem playing host to the fifth round of the Women’s World Tour.

The 11th edition of Gent-Wevelgem will see the peloton tackle 159km on the demanding roads of West Flanders. 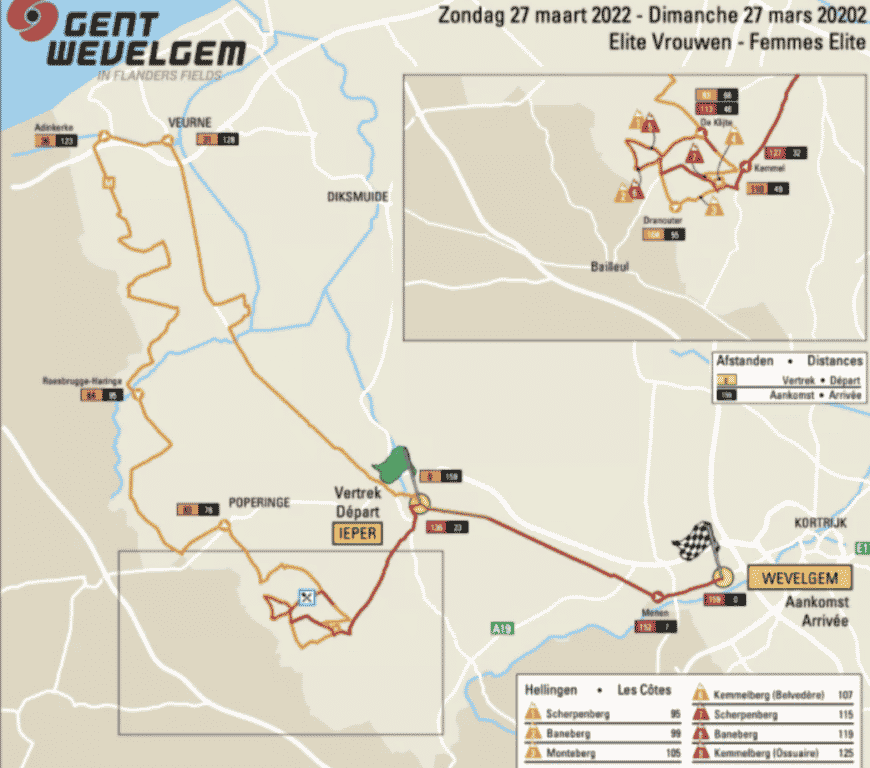 Leaving the Menin Gate in Ypres the peloton head north towards the beaches of De Panne and along the exposed, windswept coastal roads enroute to Veurne. After looping back inland via Alveringem and Poperinge the race arrives at the first of the ‘seven bergs’ at the 95km mark. Over the next 30km the unrelenting succession of short, sharp and steep hills is likely to ignite the aggressive and exciting action that Flanderien racing is famed for.

The first climb on the ‘top tube menu’ is the Scherpenberg (1.2km / 3.4%) quickly followed by the ‘wall’ of Baneberg – a 270m kicker who’s distance belies its difficulty with an average incline of 9% and a maximum of 20%

Then the peloton heads to Monteberg (1.4 km / 4.7%) which serves as a prelude to its more famous sister – the Kemmelberg. The first ascent is via the Belvédère side (600m / 10.8%) with it’s savage cobbled pave adding to the difficulty of it’s brutal gradient. 4 down and 3 to go; the peloton then repeats the sequence of climbs up the Scherpenberg and Baneberg and finally up the steeper and longer Ossuaire side of the Kemmelberg where gradients peak at 21%.

After cresting the final berg, the remaining 33km provides a relatively flat but often windy run in to the finish in Wevelgem.

Owing to the flat run in that follows the ‘seven bergs’, Gent-Wevelgem is often contested by the classicists in a reduced bunch finish. Last year was no different when Marianne Vos (Team Jumbo-Visma) out-sprinted Lotte Kopecky (SD-Worx) and Lisa Brennauer (Ceratizit-WNT) to claim the win. Vos, who has amassed 238 pro wins to date, will undoubtedly be looking to defend her title this Sunday and add another victory to this staggering tally.

Runner up last year and in 2020, Kopecky will be hoping she can finally climb to the top step of the podium this year. With a win at Strade Bianche and a 3rd at Ronde van Drenthe already this season, the Belgian national champion is certainly in a rich vein of form. Expect to see her teammates – Christine Majerus and Marlen Reusser – animate the racing and launch a few long-ranging attacks too.

Sprinter of the moment and the peloton’s preeminent fast finisher – Lorena Wiebes (Team DSM) – will also be a rider to watch. The 22 year old has had a great start to the season and will look to add another victory to her tally of 3 wins so far this year.

Another rider with 2 wins to their name this season is Marta Bastianelli (UAE Team ADQ). The 34-year-old classicist won the opening race of the year at the Vuelta CV Feminas as well as Omloop van het Hageland. Having won this race in 2018, the former World Champion, will be looking to repeat that feat this weekend.

Fellow Italian and current World Champion, Elisa Balsamo (Trek-Segafredo), will also pose a threat. With two World Tour wins in 5 days and a second at Ronde van Drenthe a fortnight ago Balsamo is clearly not suffering from the ‘rainbow stripe jinx’. Can the current World Tour leader make it an impressive hat-trick of wins in the space of a week? Teammates Ellen van Dijk and Elisa Longo Borghini will also look to race aggressively, potentially using the likes of the Monteberg or Kemmelberg as a springboard for attacks.

FDJ’s classicist – Clara Copponi – has had a solid start to the race. The 23 year old from Aix-en-Provence has notched up a 6th, two 5ths and most recently a 4th at Ronde van Drenthe. Could this be the weekend she climbs onto the podium?