Starting and finishing in the riverside town of Huy, the 25th edition of the race covers 133.4km around the Wallonia region of Belgium. One of the oldest one-day races in the Women’s calendar, Flèche celebrates its silver anniversary by ‘gifting’ the peloton with 3 ascents of the infamous Mur de Huy for the first time since its inception. 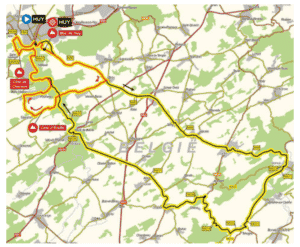 Leaving the start line in Huy, the bunch faces an opening loop of around 60km over undulating terrain. 64km in the peloton heads onto the finishing circuit via the first classified climb of the day – the Côte de Cherave (1.3km / 8.1%). 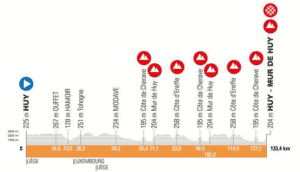 At this point the race intensifies with each passing kilometre and the battle of attrition truly begins. A fast 5km descent leads the bunch to the foot of the notorious Mur de Huy for the first of three ascents. The iconic and seemingly endless ‘Wall’ is a brutal 1.3km climb averaging 9.6% with some sections hitting 17% (and one bend pitching up to 26%).

Crossing the line atop the fearsome Mur for the first time, 2 laps of the finishing circuit remain. The 31.5km loop features an initial 10km of dragging false flat, followed by a fast and short descent that drops down to the base of the Côte d’Ereffe (2.1km / 5%). Following the summit of d’Ereffe, a rolling 12km descent leads back onto the Côte de Cherave, before ‘The Wall’ comes round again.

The finish line stands atop the final ascent of the Mur de Huy and the concluding climb will demand every ounce of remaining strength. After a truly testing day in the saddle only the strongest rider will prevail on the steepest finish in Classics cycling.

After Anna van der Breggen’s retirement last year, 2022 will see the crowning of a new ‘Queen of the Mur’ for the first time since 2014. That said, the 7-time winner may still influence the race having exchanged being in the saddle for a seat in the SD Worx team car. As DS, the 31-year-old is bound to impart her wealth of ‘Flèche’ wisdom and she’ll also be hoping that she can devise a race-winning strategy.

In a bid to continue the Dutch squad’s supreme reign in Huy, Van der Breggen will likely look to the duo of Demi Vollering and Ashleigh Moolman Pasio. Winner of last year’s Liège-Bastogne-Liège, Vollering thrives in the Ardennes and after her 2nd at Amstel Gold last week she’ll be motivated to go one better on Wednesday. Likewise, Moolman Pasio is at home on the Wallonian roads and is a perennial high placing finisher at Flèche with eight top 10’s on her palmares. 2nd in 2018, can the South African finally make it to the top step of the podium this time round?

The only rider with a better record than Moolman Pasio is Marianne Vos (Team Jumbo-Visma), who has notched up five wins and six top 10’s at Flèche. Whilst the 34-year-old’s appearance is in doubt, owing to a positive Covid-19 result, if she can make it to the start line healthy, she’ll be a rider to watch.

Compatriot, Annemiek van Vleuten (Movistar), will also be at the head of affairs. Twice second in this race she’ll be hoping her third trip to the podium will see her step onto the top spot. The 39-year-old has yet to clinch a World Tour win this season, and so will be looking to raise her arms aloft on the summit of the Mur this week.

Canyon//Sram’s Kasia Niewiadoma also heads into the race as one of the favourites. The Polish rider relishes the short and sharp côtes that pepper the Ardennes and will look to capitalise on her climbing prowess over the succession of steep ascents. 2nd last year, can she go one better in 2022?

FDJ bring a strong team to Huy and with the likes of Cecilie Uttrup Ludwig, Brodie Chapman and Marta Cavalli, they have plenty of firepower to dominate proceedings. Uttrup Ludwig was 2nd in 2020 and will again pose a threat on the punishing slopes of the Mur. Similarly, in form Cavalli, will look to repeat her winning Amstel Gold performance. The 24-year-old may well look to catch her competition off guard and go early, potentially using the Côte de Cherave as a springboard for a well-timed attack.

Fellow Italian, Elisa Longo Borghini (Trek-Segafredo) will also challenge for the win and will look to out-climb her rivals on the Mur. With several top 10’s to her name and 3rd last year, Longo Borghini will again be in contention for the victory. Following her Paris Roubaix victory, can she make it two wins from two?