About falling down and getting back up

Hello everyone! Happy to be back!

After a whole year without writing a Voxwomen Blog, I am more than happy to (first of all) be back as a “blogger” and furthermore to still be part of the women’s peloton. Why? Well that’s the story I’d like to tell you more about.

The story starts in France, on a sunny day in early September. It’s one of the rather rare race days of 2020: Stage 1 of the Tour Cycliste Féminin International de l’Ardèche.

I am feeling good today, staying well positioned on the climbs and battling it out at the intermediate sprints with Emma White for the Sprint Jersey. I am able to win the last intermediate sprint right before we hit the longest climb of the day, which is most likely going to split the peloton.

A group of around 15 riders escapes. I stay with the chase group. With some strong sprinters around me, like Chloe Hosking, and a rather technical finish, I’m looking forward to practicing my final punch to the line.

Two corners left and suddenly everything is happening very fast. I’m on the outside and a rider on my inside takes the corner with too much speed and slams into me. By trying to avoid what seems to be unavoidable, I crash, flip, slide and get stuck underneath a parked car next to the race course. I somehow get myself out and back on the bike and roll the remaining 900 metres to the finish, realising that something just didn’t feel right in my left leg.

While our physio Alessandra cleans my wounds, the adrenaline level lowers and the initial uncertain feeling goes from bad to worse, and we decide to go to the ER.

Being medically trained myself, I have to admit that I was quite shocked about the examination in the French hospital. Never was I in any way physically examined or even put into an examination room. All discussions happened in the corridor and neither my facial injuries nor the helmet marks seemed to concern the medic. No questions at all to rule out a concussion. The doctor’s final diagnosis was: no fractures, but maybe some overstretched ligaments in the knee. Spoiler alert: He was wrong 😀

Long story short: I tried to start Stage 2, but almost blacked out after half a turn of the pedal. That was followed by a seven-hour train ride home.

The MRI back home showed a fractured tibia, bone bruising on the femoral condyle, and a ruptured ACL and MCL. 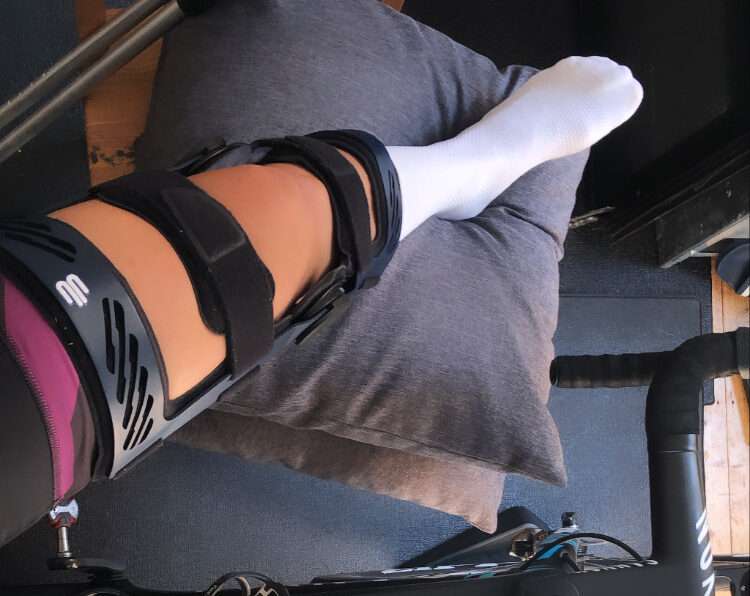 That was quite a shock to me. I’ve never before had such a serious traumatic injury that might require surgical treatment. Fortunately, Dirk Tenner, a trusted orthopaedic surgeon among cyclists in Cologne, an experienced cycling team doctor and now friend of mine, took good care of me. We decided to not fix the ACL surgically, since I wouldn’t need it for riding my bike.

While my MCL, the tibia and the femur would heal conservatively, I had physiotherapy three times a week and let me tell you, I have never suffered like that before.

Overall, the road to recovery is a rather bumpy one, like a cobbled classic. After all, I was happiest while I was while exercising. It gave me the feeling of doing something that’s bringing my knee closer to recovery and therefore bringing me closer to my bike.

I actually got back on the bike around two weeks after the crash, but only with one leg. After three weeks, I started riding with a shortened crank, allowing my knee to only bend as far as my cast would allow, which wasn’t a lot at that time. So still far away from normal training.

But the moment you start walking with crutches, carrying a plate or a cup of coffee becomes an impossible task, and taking a shower also quite a challenge. So even half an hour of 30-degree knee-bend riding feels AMAZING and once again I was happy that I’m a former triathlete, because swimming works pretty well without using both knees. 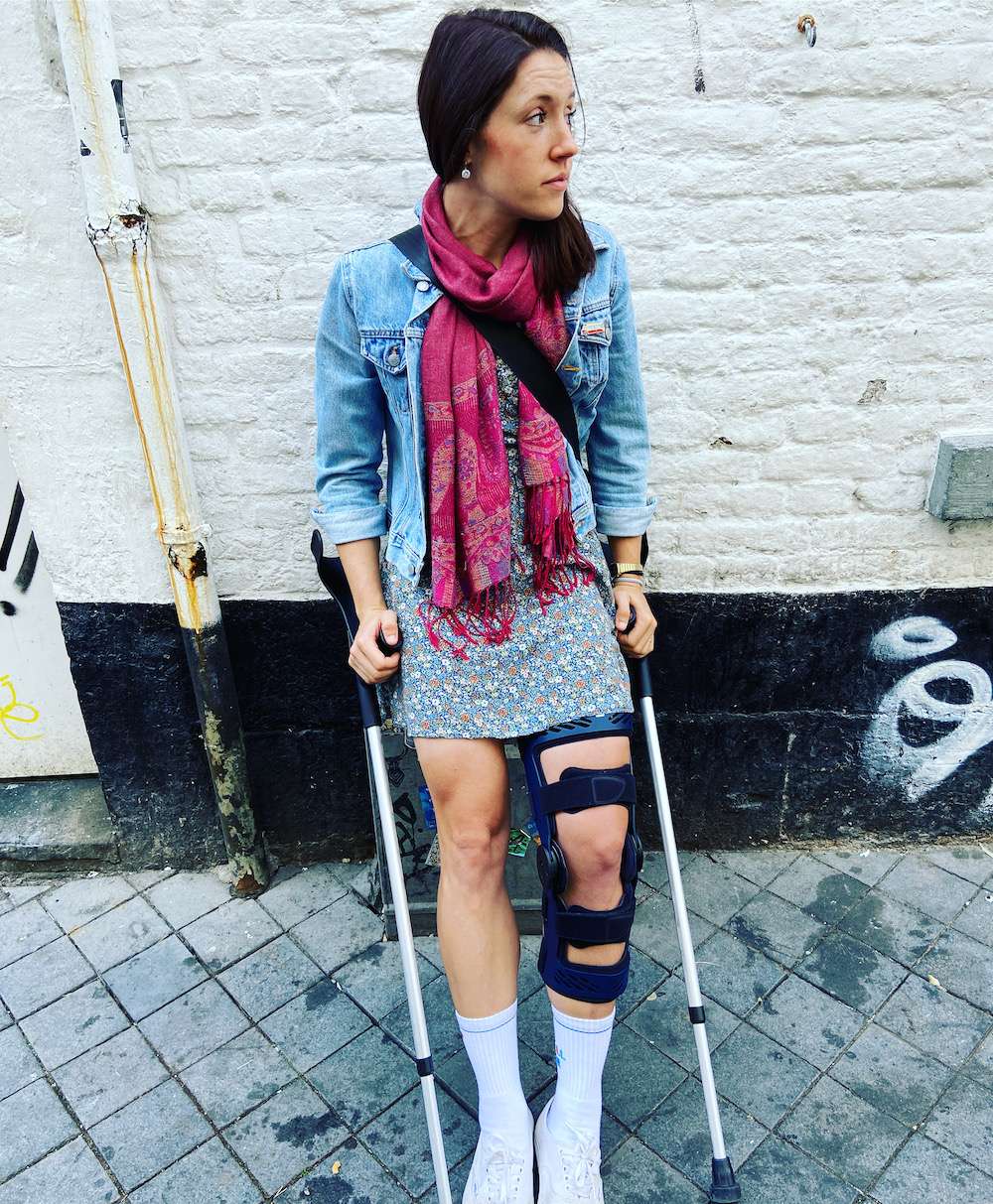 While I was improving a little day by day, I learned that my contract with Canyon//SRAM wasn’t going to be extended. Something that, itself alone, can be quite tough on you, but when you are struggling with an injury at the same time and it’s already quite late within the season… well what can I say. The chances of being signed by another team, not knowing if you are going to be back on a bike in time for the upcoming season, is not exactly great!

Though in this particular case, the strange 2020 season and its extension through until early November played into my favour. It was late within a normal season, but not for a restarted Covid season in August. So instead of finding a “last minute” solution or just leaving it there and go back to working as a doctor, I was able to find the perfect fit: Team TIBCO-Silicon Valley Bank! A team that, with a variety of rider backgrounds, a strong roster, great race schedule and a rather “high” average age, makes me feel like I’ve found just the right spot. I can’t wait to tell you more about the team and the girls and I can’t wait to start the 2021 season with them! Because not only am I back on my bike, three months after the crash, I was able also to compete in the first ever E-Cycling World Championships and shortly afterwards even managed to set some new PRs.

Seems like my knee and I are friends again and my physio’s torture really got me back to form!

Thank you for reading! Fingers crossed that next time the season is in full swing, I’ll have some race stories to tell 🙂

Until then, stay safe and stay healthy!