Adventure rides and the Olympics in a nutshell

I’m back to ramble some more and hopefully provide a little interest or insight, so let’s see where this blog takes me this time.

At the time I began writing this blog, the women’s cycling calendar found itself in an unusual slump with next-to-no racing, as many riders were embarking on some Olympic adventures. After the Baloise Ladies Tour, a four day race spread across both Belgium and the Netherlands, I had just under one month until the Tour of Norway, which was my next event. This came as a welcome opportunity to reflect upon the events that have been, and also to give the body a chance to soak up all the load in order to be refreshed for the second half of the season.

I was quite excited to arrive back in Girona (albeit at 3.30am) after travelling immediately post a final hectic stage, with the thought of being able to relax and unwind for the next week. I baked, caught up on my university studies, crawled around the cafes, rode my bike a couple times and also began preparations in the gym, but ultimately ended up with largely a rest week due to being a little under the weather. It was my birthday that weekend, so after enjoying a special breakfast (Weetbix) I took myself to the train station and selected a random destination to visit for the day. One thing that I really love to do is to explore cities and towns on foot to see all the shops and attractions, and to enjoy a nice lunch or try out a cafe. After walking all the streets back and forth in the seaside town of Portbou up near the Spanish-French border, I treated myself to a lovely bocadillo (an excellent traditional Spanish style sandwich) before going for a post-lunch dip in the sea. Coming from the other side of the world and not having visited European beaches too often, I have to say that they are quite a shock compared to what I’m used to at home – let’s just say that clothes tend to be more of an optional extra. Shoutout to Neve Bradbury for being the hostess with the mostest and throwing me a fantastic pancake dinner upon arriving back in Girona, complete with hummingbird cake and cookies, because who said dinner has to be savoury.  But then obviously you still need dessert afterwards.

Once I did get back into training, I had a couple of interesting adventure rides on the cards. For the first, I was out of the house at 6.30am with all my essentials weighing heavily in my orange bar bag (co-ordinated with my bike you know), to cycle to Perpignan in France for my first COVID vaccine. After making it the 125km, navigating the French healthcare system successfully and then with Pfizer floating around in my bloodstream, it was a quick dash to a Patisserie (when in France…) before hopping on the train back to Girona. 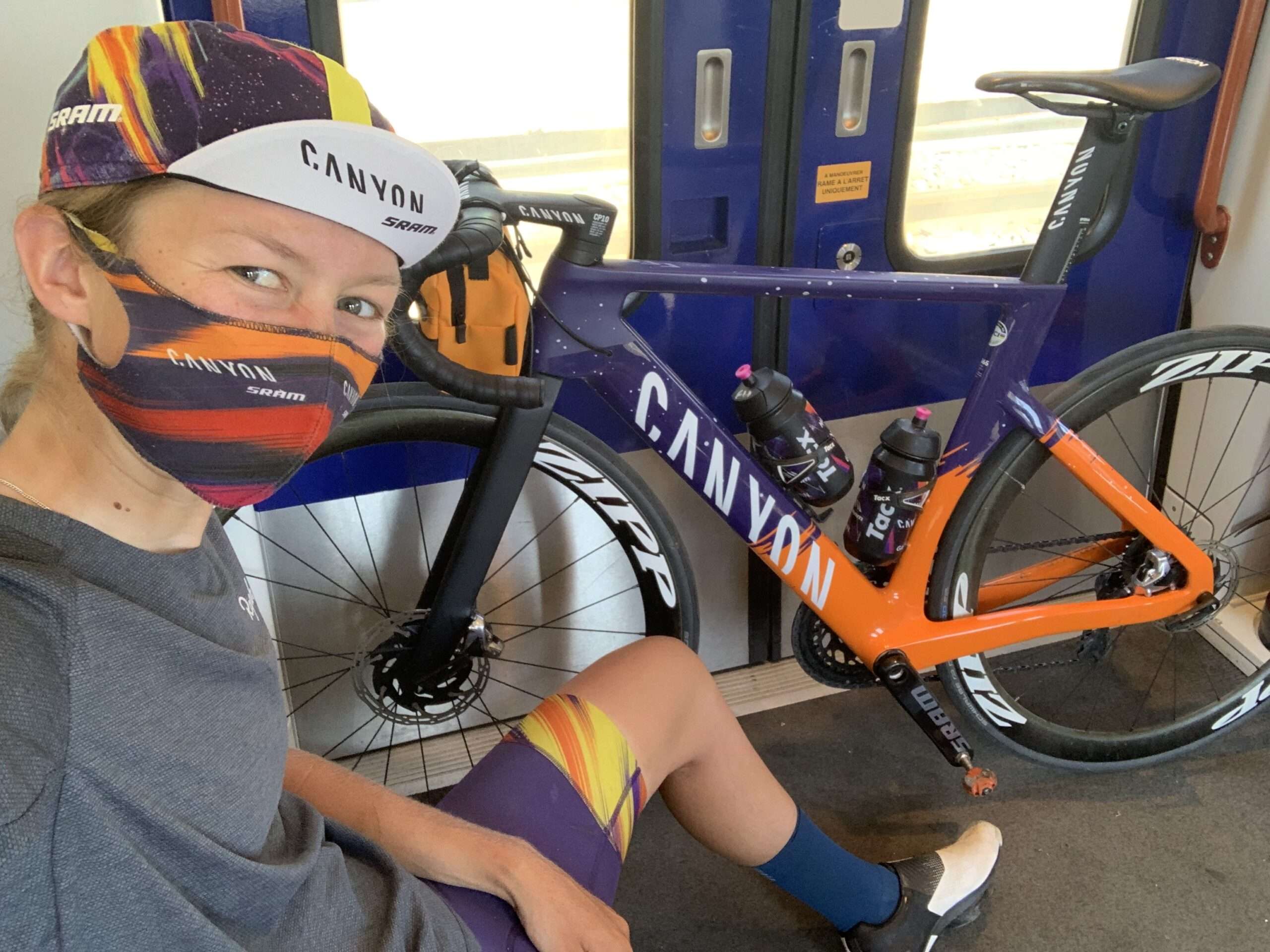 My second adventure ride was to a very small town nestled in the foothills of the Pyrenees called Camprodon, 15km from the French border. There are many things in Spain that I don’t quite understand, and locating a National Police passport office in the middle of absolute nowhere is one of them. It’s not even in the town but instead stands ominously on the outskirts in a random field – must be cheap real estate. I had driven up there before to submit my application for a Spanish residency card, so my return visit was to collect the said card. It was a 180km return trip for a piece of plastic but when you’re not European, having official permission to actually stay overseas for long periods of time is a really great feeling. 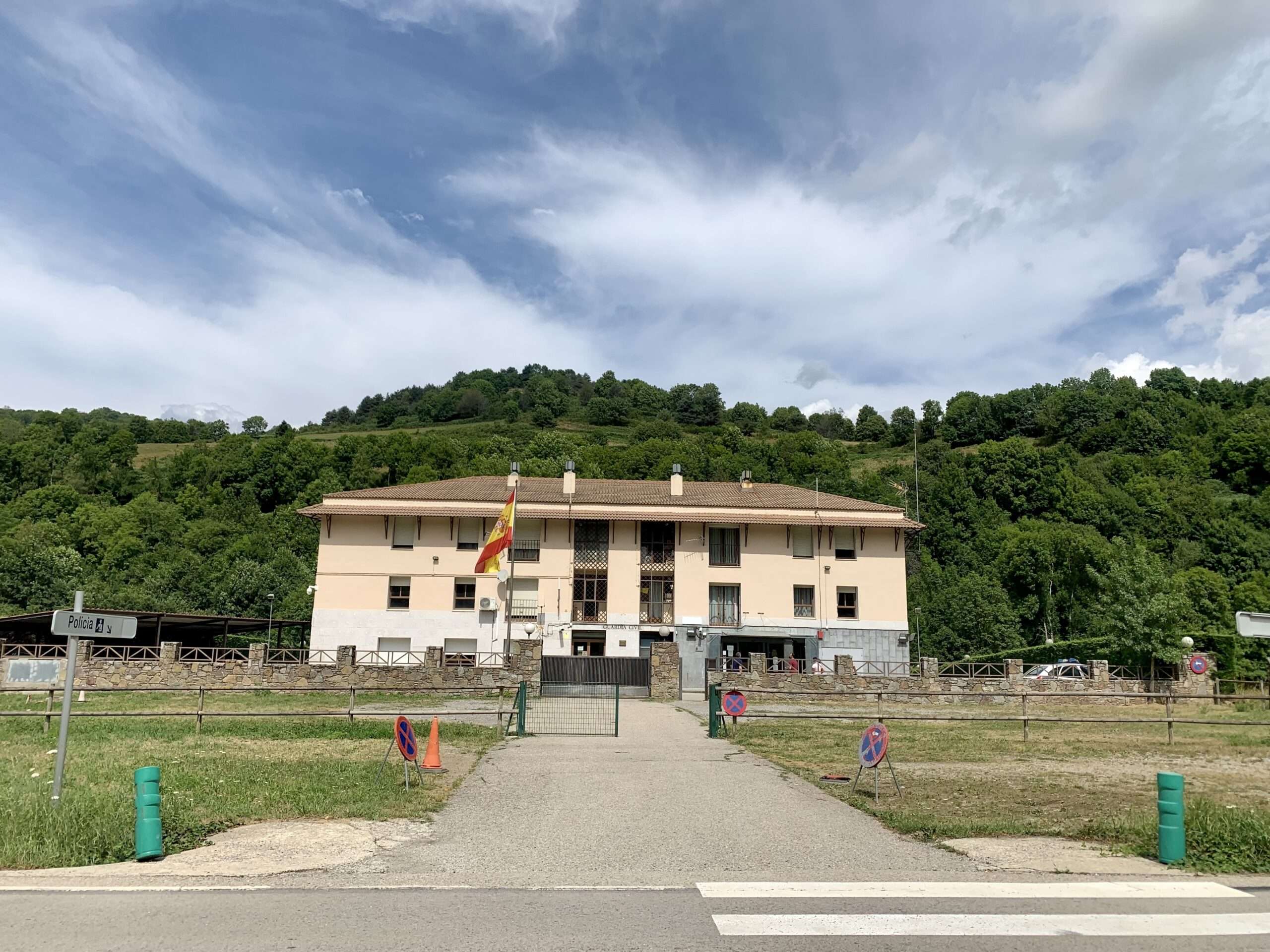 Disclaimer: I didn’t just do adventure rides, it wasn’t all sunshine and roses unfortunately as my coach had other ideas. The picture from the top of Rocacorba after copious 40/20s and a couple 20 min sweet spot efforts probably says it all, and I think that might have even been the day after maximal power testing. Lovely. 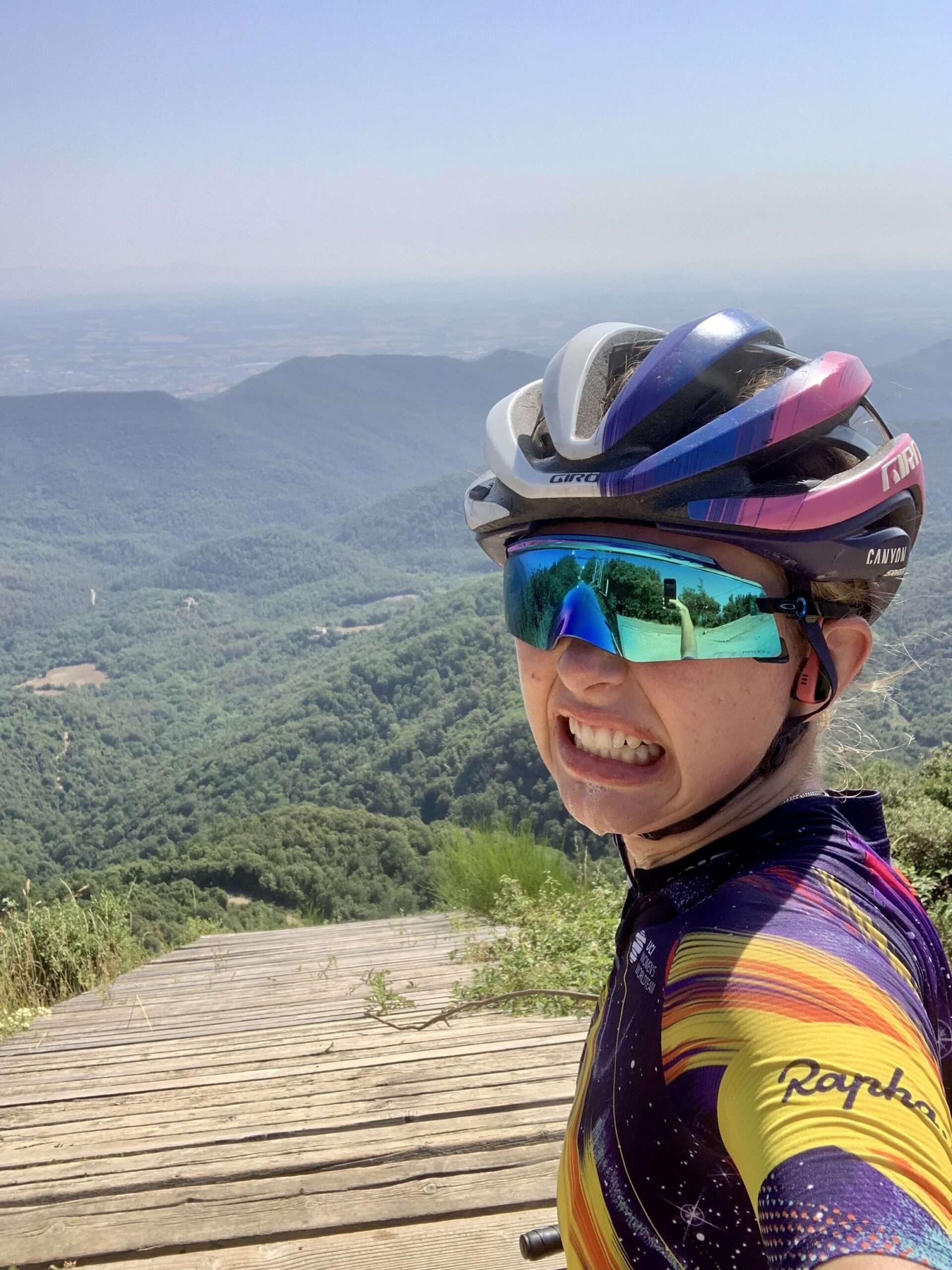 For seven of my Canyon//SRAM teammates, it was full focus towards an event that had been looming tall on the horizon for a very long time, the Tokyo Olympics. While the majority of the peloton was able to flick the switch off for a while, the exclusive Olympic contingent were preparing to travel with their biggest race of the season closing in rapidly. New Zealand didn’t qualify any spots for the road events in Tokyo, so the thought of going to the Olympics has been long gone ever since the qualification period closed in 2019.

Unfortunately, our collection of UCI points started to gain momentum again at the start of 2020 and by the end of the year the country would have been in Olympic contention once more. I know I wouldn’t have been in a position to fight for a spot after my slow road back from injuries, however it’s exciting to think about our prospects in Paris.

I for one really enjoyed watching the Olympics – not just the cycling but a whole host of sports. My daily routine involved lazing about at home from 7am until 11am with both the Spanish and New Zealand coverage on, forcing myself out the door, and then watching everything I missed upon returning from training. It’s so right when people say that they’ll never watch a diving or gymnastics world championships, or an International athletics meet, yet when the Olympics comes along they just enjoy watching everything no matter how little they know. Based on this notion, it can then be assumed that a lot of people who aren’t normally interested in cycling may have tuned in to watch the female road race.

It’s difficult to argue that this much wider audience of prospective fans and potential future cyclists actually received a true representation of women’s cycling, due to how significantly the format of this one road race differs from the majority on the calendar. I find it really bizarre to imagine racing in a peloton of only 60 riders, with the strength of a team significantly diminished due to the numbers involved, and positioning being almost irrelevant. Adding in a lack of race radios and a subsequent need to be that much more ‘switched on’ in regards to following the race situation, the final outcome is almost guaranteed to be dictated by these key differences. One thing that particularly intrigued me was just how easily the breakaway was established, with the very first attack from Anna Kiesenhofer and those who chased her being the attack to stay away. No need for counter attacks or any silly games, they were gone just like that.

In saying this though, the race was just as incredible as anticipated… but in a completely unanticipated way. If you’re looking from the perspective of someone who has never paid much attention to cycling previously, having a PhD qualified and non-professional cyclist win an Olympic gold medal against renowned competition and unfathomable odds, is a true fairytale. It’s an excellent story and one that gave a lot of positive exposure to female cycling, simply because of just how remarkable it was. For those who know even a little about cycling, seeing a ‘suicide break’ ride away at the very beginning and survive in such a prestigious race while teams looked at each other behind was just mind-blowing. For both ends of the spectrum, whether your cycling knowledge is non-existent or you’re a human version of ProCyclingStats, the race was equally enjoyable and enthralling for all.

I saw comments suggesting that the result was an embarrassment for female cycling and a completely inaccurate representation of the professionalism level and the general nature of racing. I personally fail to see how the race was to the detriment of women’s cycling, and the negative consequences that could supposedly arise because of it. How can it be an embarrassment when a sizeable proportion of the viewership are likely to not even know what was actually supposed to have happened in that race, and the particular tactics that specific teams should have used in theory. It may not have been the anticipated display of typical Dutch dominance or perhaps a great showdown between a handful of riders in a drag-race to the line, but it didn’t have to follow the traditional script to still give the larger-than-usual audience an interesting and appealing taste of the sport. For those who already follow cycling and thought the race outcome was an unmitigated disaster – who cares, I’m sure you’ll still continue to watch and support the sport anyway.

While I do agree that it is not your standard road race in the slightest, maybe we need more of these exhibition events to captivate attention and spice up what is otherwise quite a traditional sport. By looking at the excitement and hype that was generated by the Olympics road race, it can almost be seen as an unintentional example of a way to bring more publicity to women’s cycling. Playing around with the format of racing and perhaps getting a little more innovative with event style could help drive women’s cycling to the levels that the sport is currently aiming for.

Further to this, I think the road race at the Olympics has also inspired and boosted the female professional peloton itself, with many riders striving to emulate the success of Kiesenhofer through their own daring race moves. The multiple unexpected breakaway wins at the recent Tour of Norway and also the Simac Ladies Tour are testament to this, and I think this ‘no holding back’ approach will only continue to be seen more and more as riders begin to realise what is possible when you just give it a crack.

Those are my thoughts in a reasonably succinct nutshell – nobody asked me for my two cents worth but I decided to give them anyway, because that’s just what you do when you’re rather opinionated. Thanks to everyone for having a read and be sure to follow along with me on Instagram @elllaharrris. I’ve got a couple months left in Europe before I head home to New Zealand for the Summer, so lots of riding is still on the cards with some big races on the horizon.

Until next time!
Ella