“Cycling is a true, deep part of me” – Voxwomen meets Pauline Ferrand Prevot

We spoke with Pauline Ferrand Prevot over Christmas, shortly before she announced she would have to undergo another surgery on her left leg, as a new endofibrosis had been found.

Regularly updating her fans on Instagram, Ferrand Prevot stated: “Recovery is going much faster than one year ago”. The French star is riding both indoors and outdoors, but indicated she could not say exactly when she would be back racing just yet. 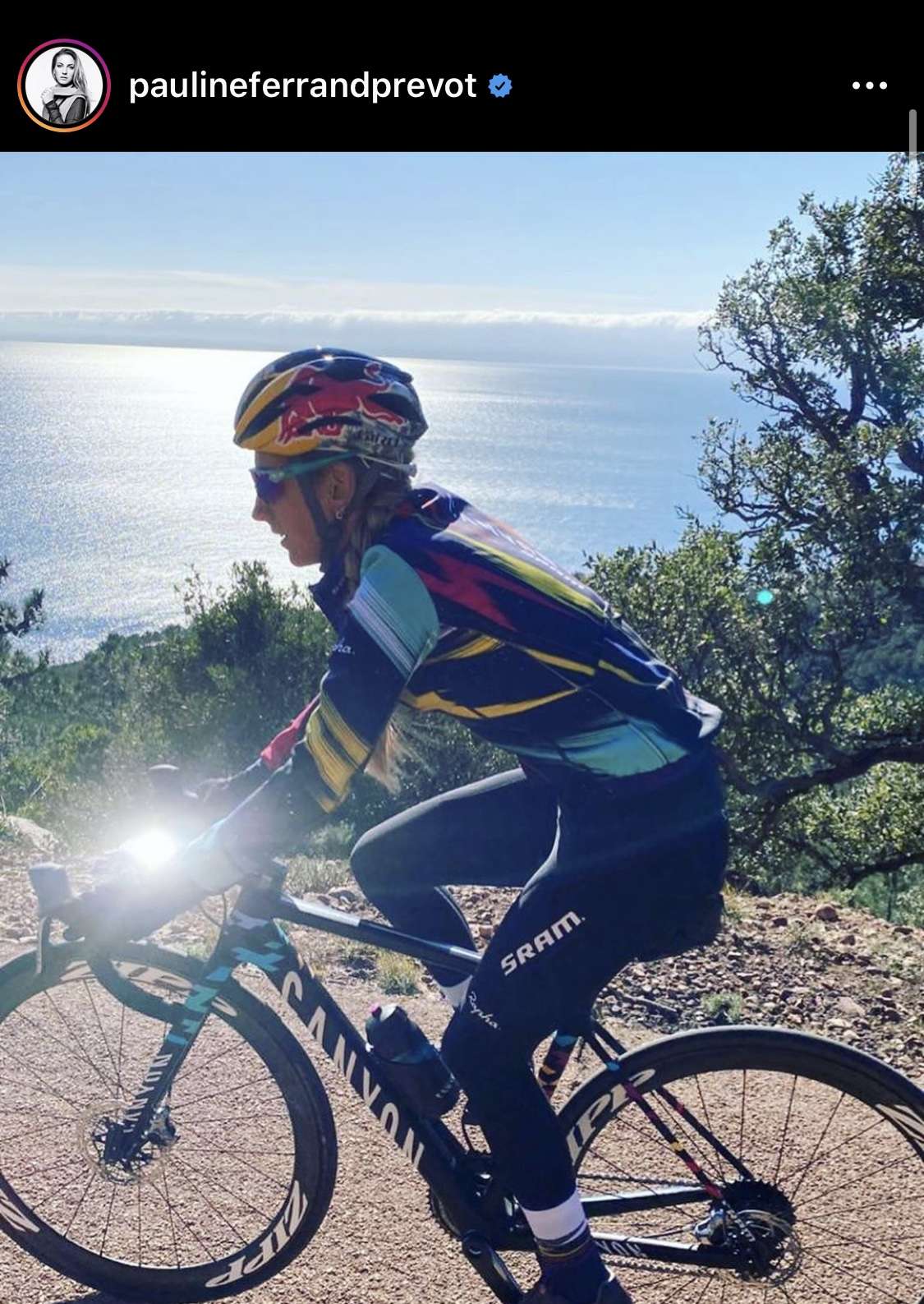 How did you first get into cycling? Did you do any other sports growing up? Why choose cycling?

I grew up in a cycling family. My mother is a cyclist, my father owned a bike shop in Reims. But my mother stopped me riding a bike, she thought it was not “girly” enough. So she signed me up for figure skating.But I hated the fact that the results were depending on somebody’s judgement. I couldn’t stand the unfairness of such a situation… all the more as the daughter of our coach was in the same group as me, and despite the fact she fell a lot, she was always winning. So I quit, moved to the bike, and immediately loved it.

What were opportunities like growing up in France for young female cyclists?

Cycling is seen more as a sport – especially on the road – for men. But that is changing. It’s pretty macho. There were the Jeannie Longo years, to which women’s cycling was reduced. So when I beat her on the road in 2012, I took her place a bit. But cycling in France remains relatively under the radar of the media. What really helped me was joining Rabobank in 2012, it allowed me to make a living from my sport.

Are any of your junior rivals racing with you now in the peloton?

My main rival was mainly Jolanda (Neff), with whom I fought at junior level at the World Championships at Mont Sainte-Anne. She was in the lead and exploded on the last lap, so I won the race. And in 2019, I did it again to win my world title, again at Mont Sainte-Anne. And I remember that I was fighting against the Ukrainian Yana Belomoyna as a junior and she is still in the top riders today.

When did you first realise you had true potential to be a winner in this sport?

I’ve known this since I was a little girl. I already put a lot of training constraints on myself, and… I was a really bad loser! Sometimes it was frowned upon. I especially remember the French road championships, where I finished second. In anger and spite, I threw away my medal. Today, fortunately, I manage much better, but I viscerally love competition, so I like to win.

You shot to fame winning the mountain bike cross country, cyclocross and road World Championships in the same year – the only rider in history to do so. How did that affect you at the time? Was it difficult to stay motivated again?

It’s funny, because I really didn’t think about this world champion treble at the start of the season. I took the World Championships as they came. Like the World Marathon Championship this year, I follow my desires, I go with the feeling. In 2015, I had absolutely not programmed that, it was not a preset goal to achieve a record, but each time, I lined up at the start of the race saying to myself that I was going to give my best… and we would see. The day before the road World Championships, a journalist for L’Equipe told me that if I won, it would be unprecedented in history. It may sound strange, but I hadn’t thought about it. But after winning this third title, I became aware of the magnitude of what had happened. Of course, once you’ve won everything, it’s a little harder to get back to it. Not the month after, because you’re still in the euphoria stage, but a little later, when you feel that you have to put your titles back into play. You tell yourself that you have to do it again. That’s more stressful. Because it creates a constraint, an obligation, while I really work with what I want and like to do.

Let’s talk 2019 and coming back from injury – just how tough was it to recover from your iliac artery surgery?

Well, the hardest point was to ignore what I was suffering from. Once we discovered what it was, I knew that I would have to go to surgery, rehab… the process was pretty clear. I just needed to be patient with myself – that is not the easiest thing for me, but for sure a great life experience that made me stronger !

Why did you choose to come back in mountain bike?

MTB is really what I love. You know, after the Olympics in Rio, I went through hard times, and what I found during those times was that cycling was a true, deep part of me, especially mountain-biking. I love the spirit and the atmosphere between all the competitors. We fight against each other, but there’s nothing insane or unfair in that competition.

You had a brilliant season – a World Cup win and then the women’s cross-country MTB world title – did you ever expect it? Did it exceed expectations?

I didn’t expect that, no. The goal was really and first of all to find my level after my operation. Then, from race to race, it got better and I arrived in good shape at Mont Sainte-Anne. I had so much fun on the bike and after, I won Snowshoe … and then the world title in the marathon.

Let’s talk about the MTB marathon champs… How was the transition to the longer distance?

Frankly, it’s the toughest race I’ve ever done, four hours pushing hard non-stop! Especially since I was never far ahead of my rival, I didn’t know if I could hold this distance. So I was really happy to have won, but also really happy to finish! It remains a good memory because the result was there, but it was so hard that I’m not sure I would do it again…

Clearly, it is to come back like this after my operation, to have no more pain and to find the pleasure of going to training, the taste for efforts once again.

You suffered a crash after that at the Olympic test event, breaking your nose – how are you doing now?

My nose was moved 0.8 mm after my fall, but the surgeon said that the surgery has an error margin of 0.5 mm, so we decided that it was not worth it. But there is still a bump, so I may have a new nose at the end of the year!

How have you enjoyed the off-season?

Yes, it really did me a lot of good! I just came back from South Africa, where we did some intensity work in training, and my coach, Barry Austin, found that we had broken all records compared to last year.

How do you plan your season?

I love cyclocross, so I insert some CX races in my winter training, it’s a great way for me to keep my motivation at its best. I don’t expect results. For sure, if they come, I’ll be more than happy and I’ll appreciate them, but no pressure on that point.

We saw online you are doing motocross to improve your descending and make you more comfortable with the speed in MTB – how is that going?

The off-road bike is a great tool for me to work on some specific points, to feel more at ease in the rock gardens or in the jumps. It’s a fun way to improve my skills!

What impact has Julien on your training?

He is not the one who makes my training plans, but he is there every day and does all the intensity work with me. He encourages me, we really share everything together, and it is really important for me. I know I can count on him. If I went alone to training, it would have been a little harder. In addition, he has always goods advice. I love it because he knows how to stay in his place too and preserve our privacy. There is really a nice balance between us.

Finally, who inspires you in cycling?

I was often asked this question, and I often replied that I did not have someone. But today I want to say someone like Mathieu Van Der Poel, who is having fun on a bike. As a road cyclist, he could make a very good living, earn more money, but he prefers to continue cyclocross and mountain biking, because he has fun. It breaks the codes of cycling a bit, which remains fairly traditional: road cyclists go on the road, that’s all. So what Mathieu brings is really good, because it shows that you don’t necessarily have to choose. In the past, I have often been criticised for doing everything on the bike, saying that I was dispersing myself, but that’s not true. With Mathieu too, we can see that the main thing is to have fun and to listen to your heart.