I have been quiet the last few months, as I took time offline and off the bike so that I could recover from a concussion. I am disappointed that I did not get to compete in my favorite Spring Classics races such as the Tour of Flanders and Liege-Bastogne-Liege, but the time off was necessary for my brain to fully recover.

Below, I share some lessons from my experience, with the hope that this post can inspire better concussion testing, recovery, and follow-up for athletes.

A concussion is a traumatic brain injury that is usually caused by an impact or strong whiplash to the head, such as a bike crash or a car accident. A concussion is often considered an “invisible injury” because it is not visible on MRIs, CT scans, blood tests, or other objective medical exams. Instead, concussions are primarily diagnosed through a combination of:

To estimate the severity of a concussion, doctors compare a patient’s post-concussion cognitive test results to a baseline test. Every patient has a different baseline, and a baseline is essential to accurately diagnose when a patient has fully recovered to their pre-concussion levels. Surprisingly, many cyclists do not have a baseline to compare themselves against. If you are a cyclist, I recommend asking your team for a baseline concussion test at the beginning of the season (or now if you don’t yet have one). If your team does not provide testing, ask your primary doctor to perform a baseline concussion test. Doing so will empower you to better test, diagnose, and heal from a concussion should you ever find yourself with one (which I hope you do not!). 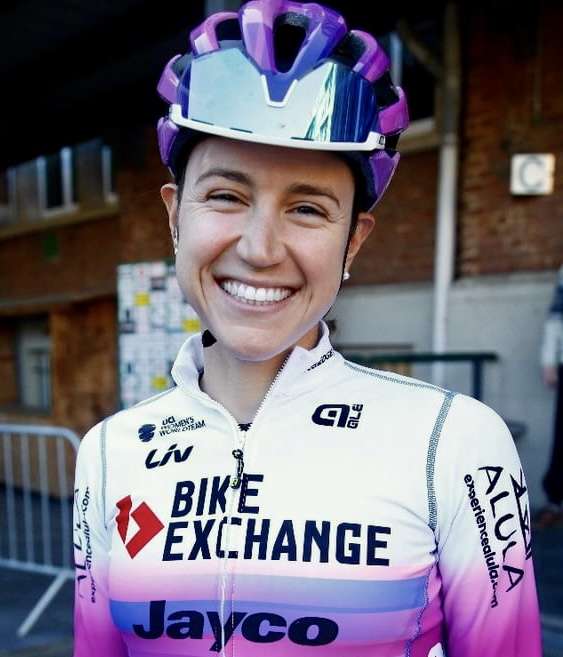 In addition to cognitive tests, symptom-tracking is another tool to estimate the severity of a concussion. Immediately after my concussion, mild stimuli (such as background chatter at a restaurant, bright lights, or walking) triggered my concussion symptoms. As I healed, I could gradually increase my environmental stimuli and experience fewer symptoms. Some doctors considered me “recovered” and clear to race as soon as I could resume my normal cycling training without symptoms. (Thankfully, my team doctors at BikeExchange-Jayco recognized the importance of a proper recovery, and they gave me adequate time to heal). The problem with this mainstream protocol is that the environmental stimuli in a race are far greater than the stimuli a cyclist experiences training on their own. As a result, many cyclists who suffer from a concussion are cleared to race before their cognitive skills have been tested in race-like environments, and many cyclists may return to racing before they are fully recovered. Cyclists may not notice any symptoms when they train on their own or even with a friend, but as soon as they enter a race where the environmental stimuli are much more intense than during training, their cognitive abilities are tested to new limits. Patients who are not fully recovered pose a risk to themselves and others.

For example, during a standard concussion test, a doctor asks a concussed patient to keep their heads still while their eyes track a pen moving back and forth slowly. If they pass this test, their eye tracking ability to focus is considered OK. However, watching a pen move slowly back and forth in a doctor’s office is very different from a race environment, where cyclists must simultaneously track riders moving at high speeds, listen to race radio, respond to riders near them, and maintain high power output and heart rate on the bike. Current concussion tests do not come close to mimicking the cognitive stimulus and multi-tasking that races require, and as a result, many athletes find themselves returning to racing before they have tested their cognitive capacity in a race-like environment. Even though many cognitive functions happen subconsciously during a race, they nonetheless use brain bandwidth (“brain width”) that is impaired after a concussion.

To test whether athletes are ready to return to racing after a concussion, post-concussion cognitive testing should simulate a race environment as closely as possible.  For example, rather than tracking a pen in a quiet room, athletes could be asked to track various moving objects at the same time, while at a high heart rate (perhaps starting on an indoor trainer), while processing information amidst background noise. Follow-up tests should incorporate high-stress situations and multi-tasking that require patients to rapidly – and frequently – switch between various cognitive systems. Stijn Quanten is a Belgian doctor who uses computer simulations to help elite athletes hone their cognitive skills; I used these simulations myself and eventually incorporated them with functional movement as part of my recovery process. Athletes should slowly increase the number of people they train with – and the intensity of the training while around others – before returning to a race. 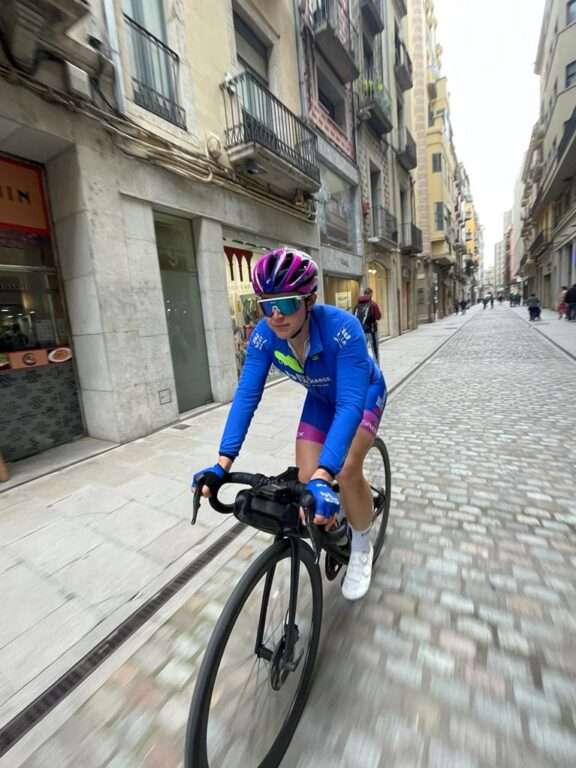 In addition to the cognitive impacts of a concussion, patients may experience a broad range of emotional changes as well (oftentimes, the emotional changes are temporary; in extreme cases they can be long-lasting and require clinical intervention). In the first two weeks after my fall, I experienced mood swings, anxiety, and irritability. I avoided conversations with people, and I became overwhelmed by the simple sound of someone’s voice. After a concussion, it is important to be compassionate and patient with yourself and others, and to ask your loved ones to do the same. Communicating how you feel is more important than ever, and your emotional needs may change daily depending on your recovery. My experience may not be the same as everyone’s, but I hope that by shedding light on the emotional impacts of a concussion, we can better care for ourselves and others who may be experiencing one.

One frustrating aspect of concussions is that the recovery is not always linear. Some weeks I felt optimistic about how much progress I was making, and the next week I felt like I was sliding backwards. My symptoms changed and evolved; some improved while others worsened or spontaneously emerged. Be cautious not to over-exert yourself when you feel good, nor to lose hope when things move backwards. As much as possible, exercise patience and do not put pressure on yourself to recover by a specific date. Even if you do everything right, your body will heal when it heals, and you cannot force it to follow a desired timeline. Everyone’s timelines and experiences are different and coming to terms with this is one of the first – and most important – aspects of a proper recovery. 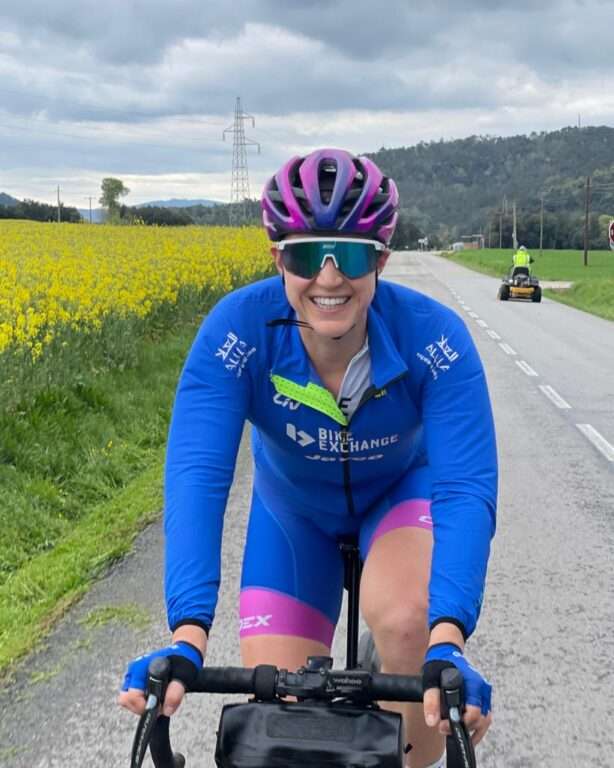 Concussions can impact neurological pathways in ways that go unnoticed for weeks, months, or even years. During my healing process, I worked with medical professionals to retrain certain muscle groups, neurological connections, and movement patterns. I took my recovery process very seriously to ensure that all aspects of my body and mind can perform at an elite level. I recommend this approach to all athletes recovering from a concussion to mitigate the risks of long-term injury. With concussion recovery, it is always better to be safe than sorry. We have a responsibility to ourselves, our teammates, and others in the peloton to learn more about concussions and healing and recovery to create a safe work environment.

The lack of comprehensive concussion testing makes it difficult for doctors to diagnose the severity of concussions, and to know when athletes have fully recovered from concussions. Consequently, many athletes return to racing before they are fully recovered, and they run a greater risk for follow-up injuries and long-term complications. I hope that by sharing what I learned through my own experience, both athletes and teams will be inspired to implement more rigorous concussion testing, recovery, and follow-up protocols going forward. I also hope we all show a high level of compassion and patience towards ourselves and others who may be suffering from a concussion.