The World Tour races are coming thick and fast and 3 days after Plouay,  the peloton heads to Spain for the Ceratizit Challenge by La Vuelta.

Since the inaugural edition of the Ceratizit Challenge in 2015 the race has grown in length and status. From the one day criterium in Madrid 6 years ago the organisers have expanded the race with a second stage being added in 2018 and a third introduced last year. 2021 continues this trajectory with the inclusion of a fourth stage in what looks set to be the toughest edition of the race to date.

Starting on Thursday, the 4 days of racing will take place in the region of Galicia, northwest Spain. Covering a total of 341km, the tour serves up two demanding mountainous stages, a mountain time trial and a concluding sprint stage.

After descending from the Cabeza de Manzaneda Ski Resort, Stage 1 will see the riders face a difficult 118.7km enroute to the finish in A Rúa.  The mid-stage, first category climb – Alto da Portela – will provide the biggest test of the day and may well prove selective. The 14.7km climb averages 5.4% and with the steepest kilometer of the climb (7.3%) coming at the top expect to see some aggressive racing. 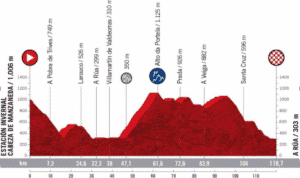 The second stage is the 7.3km mountain time trial starting at 1,066 metres and climbing to 1,490 metres at the Cabeza de Manzaneda Ski Resort. With an average gradient of around 8% and with two sections topping out at 15% it will be a tough TT that will inevitably shake up GC. 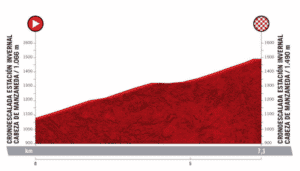 Saturday and the penultimate stage brings another lumpy and challenging day. The 107.9km of stage 3 includes the third category climb – Alto de Cerdeira (5km/4.7%) – as well as the long ascent of the second category Alto de A Lama. The 12.1km climb averages 3.4% with steeper pitches of around 7-8% nearer the top. More climbing and an undulating approach to the finish in Pereiro de Aguiar will likely produce some exciting racing. 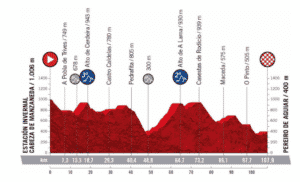 The Ceratizit Challenge concludes with a stage for the sprinters with a flatter day of 107.4km from As Pontes to the Galician capital, Santiago de Compostela. 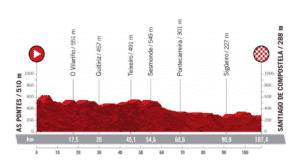 Previous editions of the race have favoured the sprinters and time trialists with past winners including the likes of Jolien D’hoore, Ellen van Dijk and Lisa Brennauer. This year, however, will see a shuffling of order at the top of the GC standings with the mountainous and hilly parcours favouring the peloton’s climbers.

Spanish team, Movistar, will be looking for a win on home soil and with Annemiek van Vleuten leading their bid for victory, they have a good chance of claiming the win. Leader of the UCI WWT, van Vleuten has had back to back world tour wins (San Sebastian and Norway) since she took gold and silver in the Tokyo TT and RR respectively. While the former world time trial champion will look to stamp her authority on this race in the mountain TT, the Dutch woman will also look to seize any opportunity presented by the demanding terrain for a trademark ‘Annemiek’ attack.

Compatriot, Anna van der Breggen (SD-Worx), will be looking to continue her run of victories in Spanish races this season. Wins at Gran Premio Ciudad de Eibar, Durango – Durango Emakumeen Saria and Vuelta a Burgos Feminas have all contributed to her impressive tally of 7 wins thus far. The 2021 Giro winner also took an emphatic stage victory (with a winning margin of over a minute) in the 11.2km mountain TT in Italy and so she’ll be relishing the thought of stage 2.

Fresh from her solo win at Plouay on Monday, Elisa Longo Borghini (Trek-Segafredo) is another climber to watch. The 29-year-old national road and TT champion has had a great season this year with 2 world tour wins and numerous podiums. 2nd in last year’s race, the Italian will be hoping the change of parcours allows her to rise to the top spot this week and make it two wins from two.

FDJ’s Danish climber – Cecillie Ludwig Uttrup – will also be a rider vying for the overall win. The 25 year old took her much anticipated first World Tour win on Stage 3 of the Vuelta a Burgos Feminas earlier this year and she’ll be hoping her winning form in Spain continues.

Australian squad Team BikeExchange bring a strong team to the race. Led by Amanda Spratt and Lucy Kennedy they’ll look to animate the race with several strong tactical cards to play. Spanish rider, Ane Santesteban, will also give the team a further option as the climber will relish the new look format of the race and be motivated to perform well in her home tour.

Kasia Niewiadoma (Canyon SRAM) has had a solid season so far, but a win has eluded the 26 year old. The Polish climber will thrive on the mountainous roads of Galicia and she’ll be hoping this week will be the race she can finally raise her arms aloft in 2021.

Team DSM’s sprinter Coryn Rivera will be a rider hunting stage wins and she may well feature at the head of affairs. The Californian had a great race at the Olympics with a 7th place and if she can make it over the categorised mountains she’ll be a rider to watch in select bunch sprints. Teammate, Juliette Labous, is also likely to feature in the GC battle. The 22-year-old won the best young rider jersey at the Giro in 2019 and as a rider who enjoys hilly parcours she’ll be hoping to be in contention this week.