The peloton rolls into the Netherlands this Sunday for round seven of the Women’s World Tour.

The 8th edition of Amstel Gold will see the peloton face a demanding 128.5km route through the hilly region of Limburg in the south of the Netherlands. With 19 bergs and over 1600m of elevation expect to see the punchy climbers rise to the fore in this unrelenting race.

Upon leaving the provincial capital, Maastricht, the peloton traverses the Limburg countryside – facing 10 bergs and 72.8km enroute to the finishing circuit. 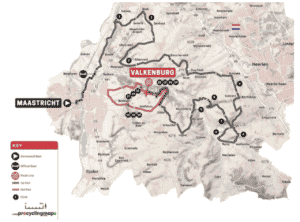 After passing through the village of Sibbe the bunch then tackles the first of four ascents of the ‘most revered hill in the Netherlands’ – the Cauberg –  an 800m long climb with an average gradient of 6.5% and a maximum of 12.8%.

Following the Cauberg the peloton begins the first of three laps of the finishing circuit around Valkenburg. The 17.9km loop features narrow, twisting roads punctuated by short, sharp ascents as well as the synonymous ‘triple Amstel climbs’ – the Geulhemmerberg (1km / 5%), the Bemelerberg (900m / 5%), and the Cauberg (800m / 6.5%).

Cresting the infamous Cauberg for the final time there is just 1.6km to go, which – as we have seen in recent years – is likely to set up an exciting and nail-biting finish.

To triumph in this race of attrition squads will need the ‘Ardennes holy trinity’ of attributes – individual strength, tactical nous and cohesive teamwork. Owing to the unrelenting nature of the course, we can expect to see the peloton’s main protagonists vying for the win.

Defending champion, Marianne Vos (Team Jumbo Visma), has taken the decision not to repeat her performance of 2021, missing the race to focus on Paris Roubaix. In 2021 she won from a small group that had just reeled in the Cauberg escapees of Kasia Niewiadoma (Canyon//SRAM Racing) and Elisa Longo Borghini (Trek-Segafredo), Vos unleashed her powerful kick and out-sprinted her rivals to take the win.

Ardennes specialist and former winner, Kasia Niewiadoma, will be hoping to raise her arms aloft again this Sunday. Back in 2019, the 27-year-old Polish rider attacked a select group on the final ascent of the Cauberg and managed to hold off Annemiek van Vleuten in what was a dramatic pursuit over the final kilometres. A rider who thrives in this terrain she’ll be looking to end her 2 season-long winless run this weekend.

There is little last year’s World Tour champion Annemiek van Vleuten (Movistar) hasn’t won, but Amstel Gold remains a notable omission from her palmares. The 39 year old is likely to ride aggressively and use the climbs as a springboard for some vicious attacks. After a 3rd place finish last year, she’ll be hoping she can make it onto the top step in 2022.

Compatriots Demi Vollering and Chantal van den Broek-Blaak are likely to spearhead SD Worx’s bid for the win. Both riders have previously performed well in Amstel, with Vollering’s 2nd place last year and van den Broek-Blaak’s victory in 2018. Alongside them, Ashleigh Moolman Pasio, will also pose a big threat and will look to use her climbing prowess on the bergs. After a fantastic display of teamwork last weekend at Ronde van Vlaanderen, we can expect to see the Dutch squad use similar tactics to dominate proceedings again this weekend.

Rider of the moment and World Champion, Elisa Balsamo (Trek-Segafredo), is certainly a pre-race favourite. If she can hang on to the leaders over the succession of tough climbs, she’ll prove tough to beat in a sprint. Can she add a fourth World Tour win to her 2022 tally this Sunday? Teammate and fellow Italian, Elisa Longo Borghini, was likely to cover any moves on the climbs and shadow the Cauberg attacks, but has to miss the race due to illness.

FDJ’s Cecille Uttrup Ludwig will also be a rider to watch. 7th last year and 6th in 2019, Uttrup Ludwig will be hoping she can finally step onto the Amstel podium this time round. With the likes of Brodie Chapman and Marta Cavalli lining up alongside the Dane, FDJ certainly have the climbing power to animate the race.

Other riders who are likely to feature at the sharp end of affairs include Sofia Bertizzolo (UAE Team ADQ), Veronica Ewers (EF Education-TIBCO-SVB) and Soraya Paladin (Canyon//SRAM Racing).