How did I get here? Amber Joseph’s first Voxwomen blog!

I’ve never written a blog before, but as Voxwomen gave me my first opportunity as a 16 year old to ride in an international field, I could hardly refuse! I often reflect on all of the opportunities I have had since those early days. Sometimes it’s at a major competition like the World Championships or Commonwealth Games when nerves are kicking in. Sometimes it’s riding at home in Barbados with the sun on my back. But whatever the time I know I’m so fortunate to be living as an Elite athlete, doing what I love everyday. But, of course, it’s not been easy. There’s been plenty of tears, lots of insecurity and splinters of Roubaix track still embedded in my backside, but we can touch on that later. In the next few blogs I’d like to talk about some of the things you have to balance as an elite track cyclist and the ups and downs. But I realise a number of readers, particularly young riders might think “well how would I get to do that?” So let’s deal with that first in this blog. 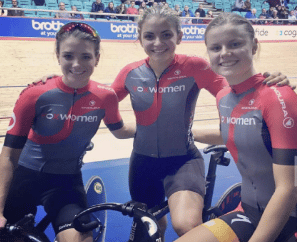 ​I have the advantage of having dual Barbados/UK nationality. Originally I started riding in the UK and aiming for the GB podium as a sprinter (more of that in a later blog). But in my heart I knew I wanted to represent the blue and yellow of Barbados. When I made the switch, that came with the instant benefit that I became the top female cyclist in Barbados. If I continued aiming to be a GB rider and wanted to get into the Worlds Omnium, there are SO many World Class GB riders I’d have to get past to be selected, plus the senior academy. In reality you can be waiting for years for such a strong group of riders to retire and a number of the GB Academy group that I competed against in my development years, who I consider to be great track riders, haven’t to date had opportunities on the track at major championships like I have. So by riding for Barbados I have bypassed that national selection problem and made it to the last 3 World Championships, 3 Pan-Am Championships, Commonwealth Games, Pan-Am Games and multiple World/Nations Cups. But, before anyone says “Oh you’ve got it easy”, let me explain the many problems. 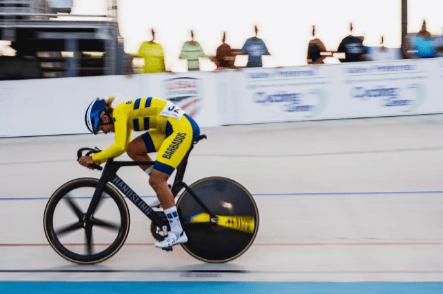 Riding for a small nation means I get national selection, so that opens up a path to championships, but there are a whole series of hurdles on that path. A small nation doesn’t get automatic entry to the Olympics, or Worlds there are no “free places” for a developing nation in track cycling. Because of the standard track limit of 24 riders, entry to the Worlds is limited to the top-24 riders in the UCI World rankings for omnium, scratch or points. The first 16 places are allocated to the top-16 Nations, so in reality although it might be hard to gain national selection if you are from a strong cycling nation, like GB, NED etc…, you can be pretty certain that your nation has a guaranteed place in most events. The other 8 places are allocated to the best individual riders outside of those top-nations. So, throughout the year all the riders from smaller cycling nations are nervously checking the UCI rankings, which continually fluctuate, planning which events might help their own ranking and if they can make it into the quota cut-off. But that raises the second hurdle – the larger nations have multiple riders and can accumulate the results from those riders in their rankings. But for riders like me we are charging around on our own trying to work out which events are worth doing and how many we can afford to do and if one race is a bit of a disaster, I have to replace that event with something better. There’s no-one else to help out with the ranking. Of course one of the biggest hurdles is MONEY, or lack of it… The bigger nations have annual budgets for cycling that can run to multi-million £/Euros. Our national budget is a very small fraction of that. Barbados doesn’t have a 250m competition track, we don’t have fleets of bikes or mechanics, physios or support staff. 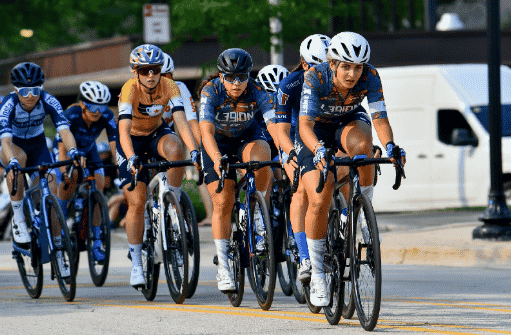 At the 2021 Worlds it was revealed in the team managers’ meeting that some nations have spent more on their latest skinsuits than I can imagine getting in support for the whole of my career. So when I’m competing I am often on my own. Sometimes my mum can travel with me, but she is only there to support me i don’t think she’s ever put a wheel on my bike. ( she also makes sure I am on time for my race. I’d be lost without her.) So, generally I do all my own bike prep and mechanics myself. Because of that if I have a problem during a race it can be a major issue. But as a solo rider, with next to no support at meetings, some other nations have been really helpful to me. I have had to borrow wheels, frames, rollers, pretty much everything at one time or another. Other team coaches or mechanics have held me up when I am starting on the blue line and other riders have been there to support me on the occasions it all ends in a crash or tears. So I don’t feel alone at races all the time, I have met some amazing people on my journey so far. I do feel lucky.

Thanks for taking the time to read,
Amber