There’s no better way to start with a new team than winning the first UCI race of the season. Which is exactly what my Rally Cycling team and I did when we won the first stage of the Santos Women’s Tour Down Under in mid January. But it would be remiss of me to suggest that this is a normal occurrence.

Moving to a new team is much like starting a new relationship. Meeting the team is just as daunting – if not more – as the first time you meet your significant other’s family and friends. You need to figure out which friend could potentially be your go-to for advice, which awkward uncle you should avoid, how much – or little – you should talk, and most importantly, you need to make a good first impression on the parents. It can be an anxiety filled process.

While I don’t want to suggest that my Rally Cycling team and I have miraculously found the magic recipe for how to create a cohesive team from the get-go, the last month of racing in Australia has certainly been a great start to 2020.

But how did we get here? It boils down to these main things; we built up a good rapport among the riders and staff over the off season which helped to foster honesty and trust.

Social science research professor of the moment Berné Brown has popularised the word ‘vulnerability’. According to Dr Brown “true belonging only happens when we present our authentic, imperfect selves to the world”. For me, the starting point of building a cohesive team starts with developing an element of comfort in the group and encouraging an environment where people feel comfortable to laugh with and at each other.

Enter the off season training camps that you see plastered all over social media in November and December.

In mid-December I travelled to Minneapolis, Minnesota to meet up with the entire Rally Cycling team. While we were officially launching the team we also made time to a do a bunch of activities that allowed us to get to know each other off the bike; or almost off the bike.

We went fat biking which I had never heard of or tried before. Undeterred, I jumped on the bike and took off, ‘I’m a pro, this will be easy’. I lost control of the bike not once but twice, both times skidding across the ice chest first like a penguin being used as a bowling ball. I jumped up wiping the snow off my chest to see my new teammates staring at me silently, trying to decide what the appropriate reaction should be to their team leader taking herself out. It was like the one time Ellen van Dijk crashed at the traffic lights because she couldn’t unclip from the pedals fast enough and we all wanted to laugh but needed to make sure she was okay first. I laughed and jumped straight back on the bike, stoked to be outside on the snow and totally out of my comfort zone. If their new team leader is willing to embarrass herself then maybe they can also feel the same freedom to make mistakes. 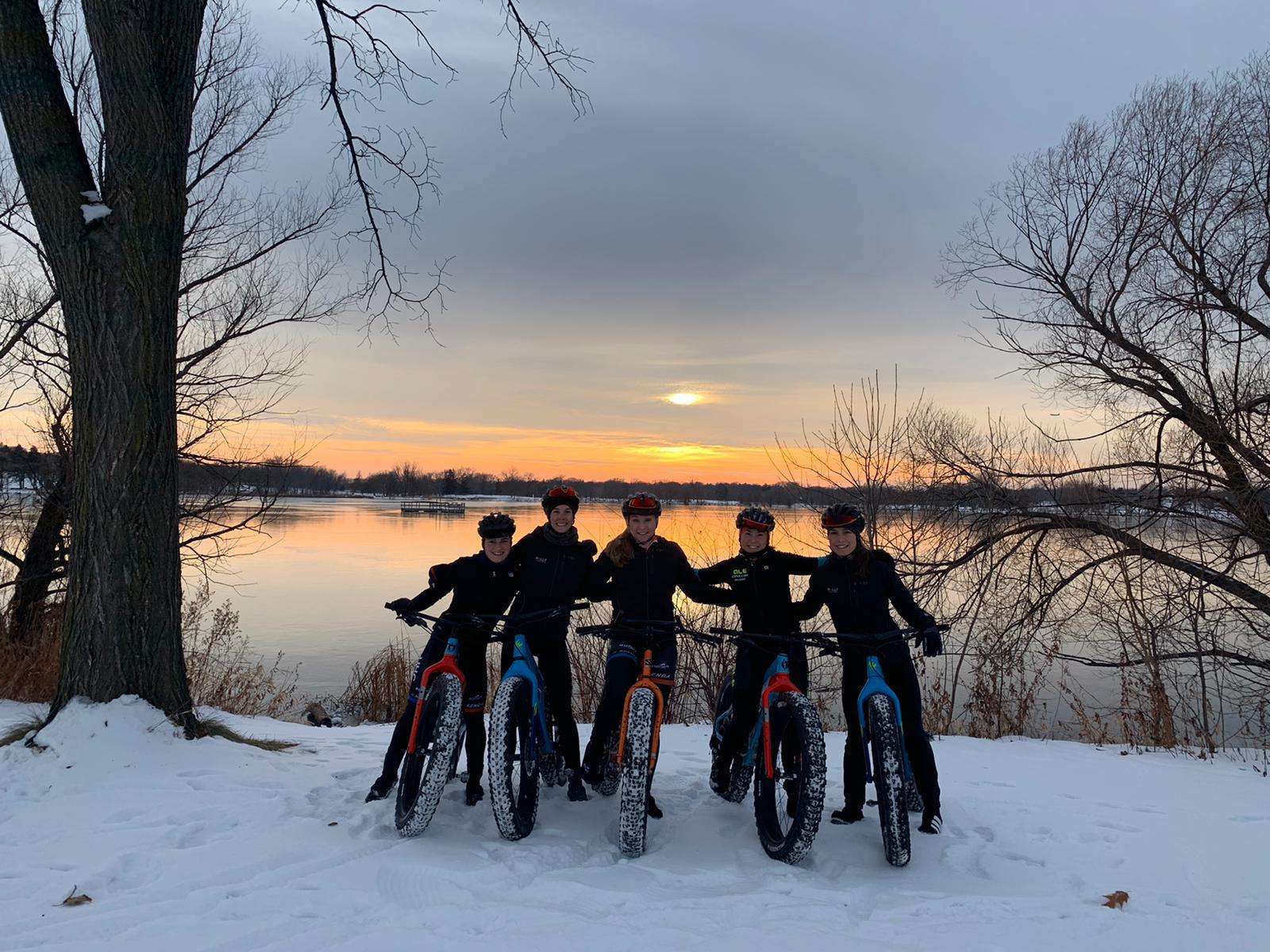 Certainly, that seemed to be the case when we got stuck into the racing in Australia. During Race Torquay, the new one day race held before the Cadel Evans Great Ocean Road Race, my teammates were unafraid to get dropped. This might seem like a strange statement but in the past I have found riders seem too afraid to get dropped and because of this fear they stop themselves from following an attack or impacting the race. In comparison, my teammates would jump with an attack then find themselves filtering back through the peloton and the convoy. But they wouldn’t give up. They fought their way back to the convoy, grabbed bottles for their teammates and made their way back to the front of the peloton. It was impressive to see that they were unafraid of what people thought and instead just focused on giving their best.

The building of good rapport and relationships in the off-season doesn’t just help with creating an environment where people are happy to try and fail rather than not to try at all. It also helps when you need to give, and receive, honest and open feedback.

When I signed with Rally Cycling one of the things I was seeking out was an environment where I would be able to give and receive feedback. I love feedback. I love knowing what I’ve done wrong and what I can do better. It’s how I learn and grow and develop as a rider and a person.

But I recognise that feedback can be hard to receive at the best of times. It’s even harder to swallow when you don’t like the person giving it to you. So it’s paramount to try and establish relationships not just among the riders but also the staff where there is mutual respect. People need to understand and buy into the idea that feedback and debriefs are a way of helping the team and individual people improve. 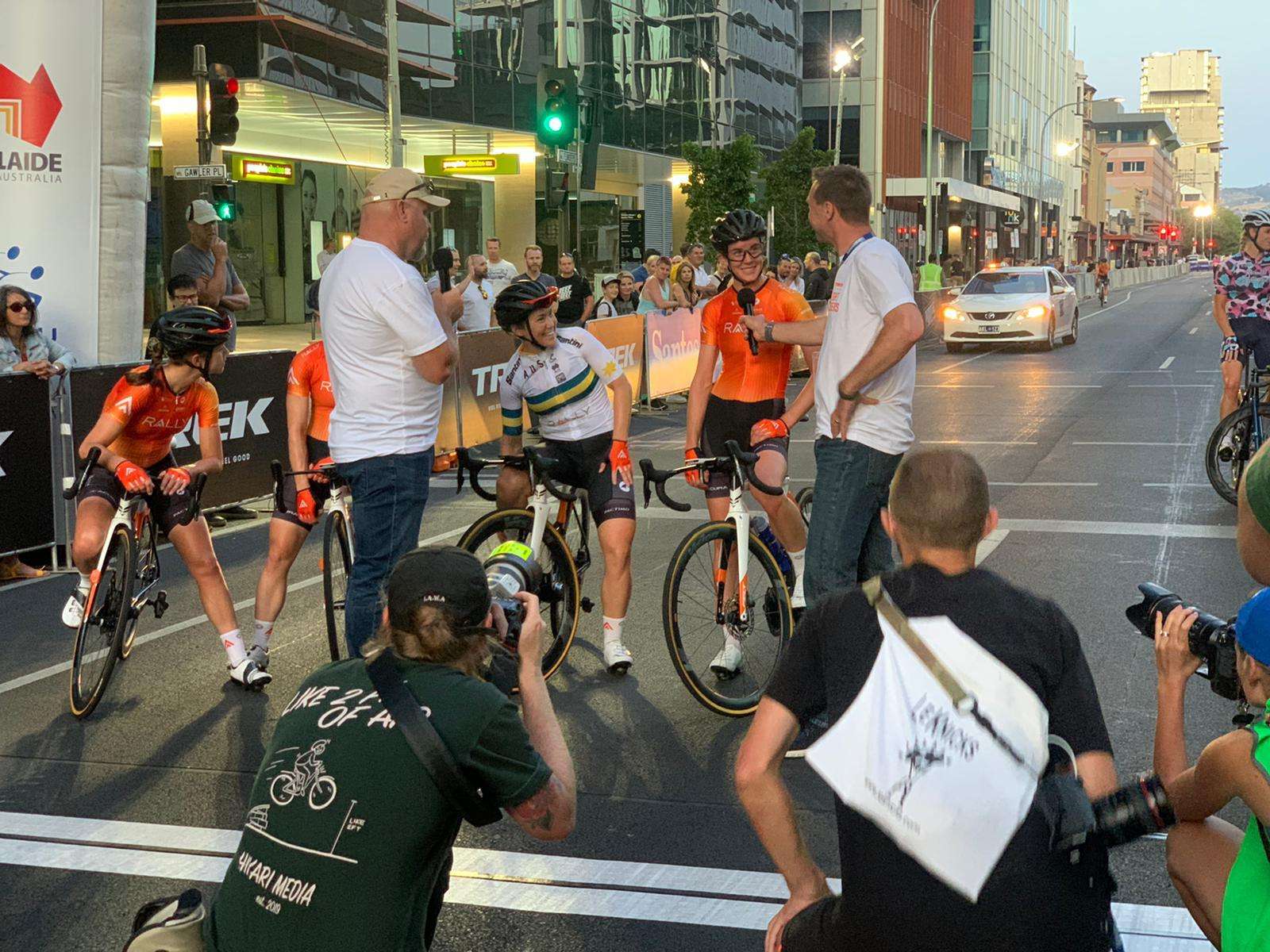 Feedback can also be given when things are good; one of the sayings championed by Cycling Australia’s high performance program is, ‘What was good? What can we do better?’

My new teammate Leigh Ann Ganzar found herself in the break during the final stage of the Tour Down Under and sprinted to fourth place. It was a great result for one of her first major international races outside of North America but we still went back to the drawing board as a team after the race and discussed what we could do better next time. We spoke about knowing who you are racing against and their strengths and weaknesses, making sure you constantly take in the changing conditions of races and always thinking about how you will win the bike race.

A few days later we lined up for the Trek Night Riders criterium in downtown Adelaide. After a few attacks throughout the race, Leigh Ann launched a perfectly timed move down the finish straight with two laps to go and held off the fast charging peloton to take the win. After the race she told me she had my feedback in her head. 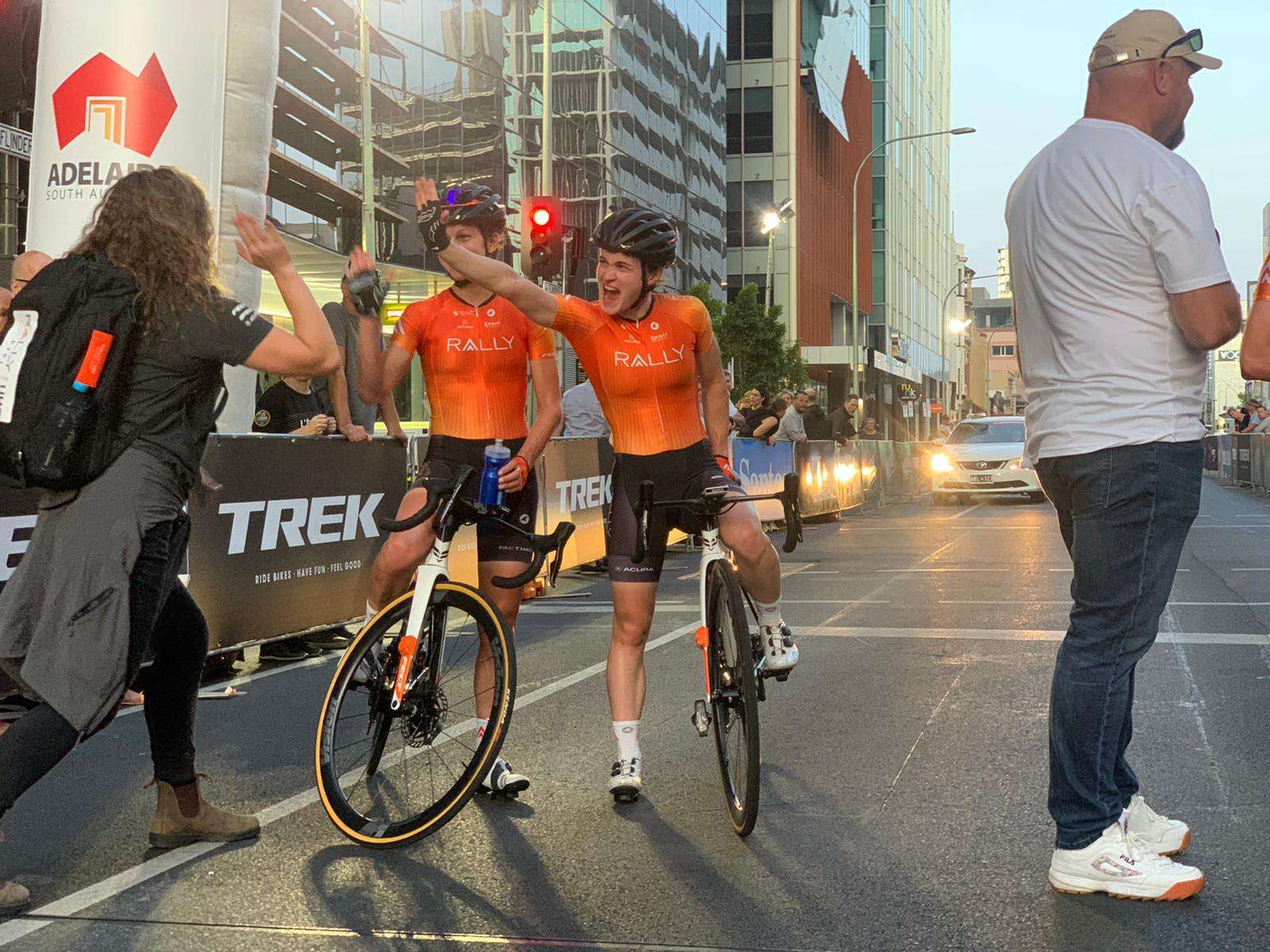 Which brings me to trust. Trust is hard to earn but easy to lose. It’s amplified when you add speed, a peloton and a high-pressure environment. But when you’ve built up a good relationship with your teammates and are honest with each other it can result in phenomenal team performances like Rally Cycling executed at the Cadel Evans race.

Arguably one of the smaller teams going into the race we rode as a unit and took control of the race when the breakaway group’s gap grew to over four minutes.

With the wind howling and the skies opening we took control of the race. As we swung right onto Barrabool road we knew other teams would try to force an echelon. With me in their ears my Rally Cycling teammates held the left hand side of the road eating into the breakaway’s gap while at the same time forcing other teams to be battered by the wind on the right hand side of the road. While my teammates sat perfectly positioned in echelon formation in front of me I had an armchair ride to the last four climbs of the day.

If you’ve seen any of the coverage from the first World Tour race of the year you would be hard-pressed to miss the orange Rally Cycling train. While sixth was the best I could finish at the end of the race and my other four teammates crashed in the huge pile up that occurred around 20km to go, the sense of pride and satisfaction we all felt when we sat around the table debriefing after the race was immense.

We’d come together as a team with a clear purpose and objective. And it felt good.

Until next time, thank you for reading! Chloe Hosking 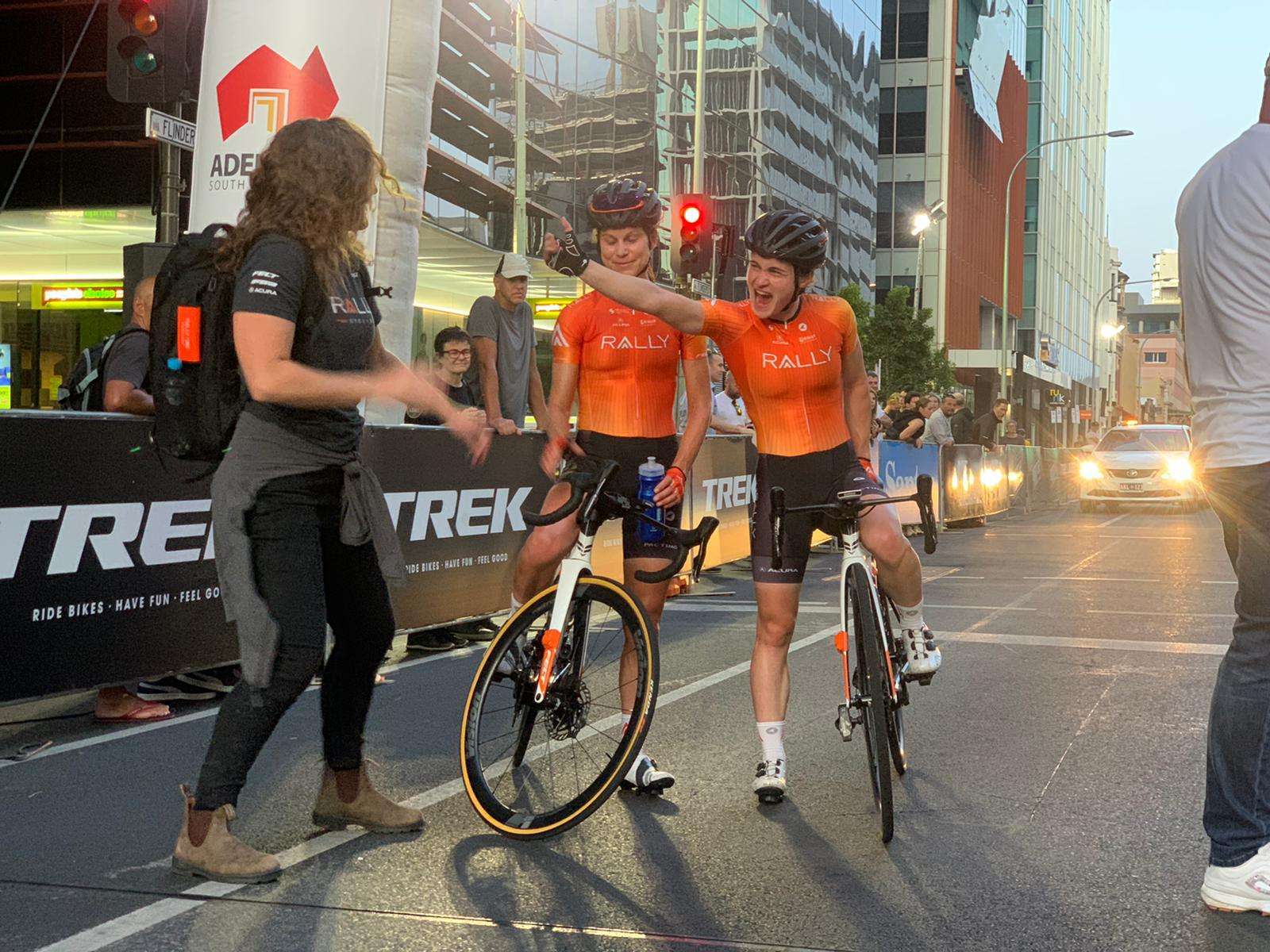