In collaboration with Peloton Magazine, we spoke with Sarah Gigante, a young cycling talent who at age 18 won the elite road race at the 2019 Australian national championships. She currently rides for Team Tibco-Silicon Valley Bank, while also completing her university studies. Find out a little more about her in our latest interview!

Where are you from?

I’m from Melbourne, Australia. I live in Richmond, which is super close to the city. On one hand, it means that I’m close to the local crits and bunch rides, which I love, but on the other hand, I am also surrounded by a lot of traffic, not many hills and so many stop lights!

Where do you live now?

I don’t really have a proper home base this year. I am travelling around with my team for most of the season and mainly living out of my suitcase. In saying that, my team went back to the USA after the Ardennes, as we had a pretty long block without much racing, so I am currently renting in Girona for two months. I absolutely love it here – the riding, weather and company are all top notch. I have already decided that I’ll have to have a real base next year, and Girona is definitely looking like a potential candidate! 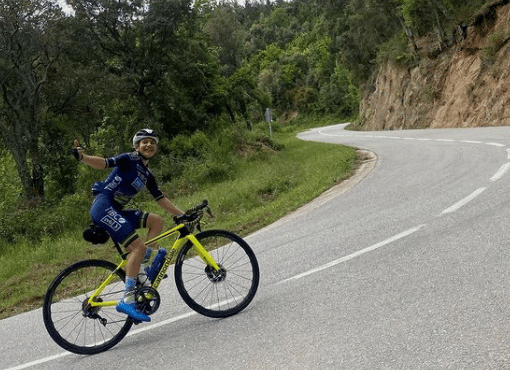 How did you get started in cycling?

My family has always been really into outdoor and active hobbies, so when I was a little kid, we used to go on the Great Victorian Bike Ride each year. It’s nine days of riding across the state, camping in a new town each night with lots of families and also some school groups, while big trucks take your bags and tents between the towns for you.  At eight years old, after accompanying my mum for two trips on a trailer bike and one on a tandem, I told her that I was ‘sick of looking at her backside’ and wanted to do the 600km on my own bike! It is a lot of riding for a little kid, so my mum googled ‘cycling clubs for kids’ and up came Brunswick Cycling Club. We rocked up to the velodrome for the Sunday Junior Track Clinic with my brother’s old mountain bike in the car, at which point I was told that I ‘needed a real bike’ and was handed one without gears or brakes! I was very slow to start with, and took 1 minute and 28 seconds for my first race, which was a 1 lap (333m) time trial called the 30 Second Challenge, because the goal was to beat 30 seconds! By the end of the morning though, I was already hooked. I was soon off to try the indoor velodrome and then I started racing on the road the year after that. I loved track and road equally until about 2018, but after going to both the Junior Track and Road World Champs that year, I decided that my passion was on the road and I’ve dived headfirst into it since then.

At what point did you realise that cycling was more than a hobby?

I have always been super competitive, and I remember taking my racing and even my training quite seriously, as an eight year old at the Under 11 State Championships! I had done other sports before cycling, but from the moment I started at the Brunswick Junior Clinic, I realised I’d completely fallen in love with everything about the sport, and it already felt like more than a hobby to me. I was the first competitive cyclist in my family, but also managed to drag my mum and my older brother into it as well. It sounds pretty crazy, but I’d say that my life has revolved around the sport since that moment, for over half of my life now!

What’s your most cherished memory in your sporting career to date?

I have a few incredibly special memories, but I don’t think anything can top winning the 2019 Australian National Road Race Championship, as my first race as an Under 23 cyclist riding against the Elites. It was such a huge surprise, because I was hoping to simply finish the race (which is held on a brutally hilly course in Buninyong!) and I’d had a challenging year before that, breaking both my arms at once and also juggling my final year of high school alongside my cycling. I just could not believe what had happened and it really did take a month or two for it to fully sink in!

What are your goals for the Olympics?

I am so honoured to simply be going to the Olympics and so grateful that I have this opportunity, so my main goal is to soak up the experience and to really enjoy it, because it’s not too often that your childhood dream becomes a reality. One thing I really do want to achieve is to be able to line up on the startline and know that I’ve done everything in my control to prepare well, and that way, I can be satisfied no matter what the outcome is. I am focusing on the time trial, but I’m also super excited for the road race because we have such a strong team!

What will your training look like as the Games approach?

I broke my collarbone, elbow and fibula two months ago, at Flèche Wallonne, and had to pause my training for quite a while because of the broken leg. It certainly wasn’t the ideal leadup, but we’ve just had to adjust our approach to suit my new circumstances. Because I can’t spend a ton of time working my way up to peak fitness again, my training is extremely focused on the Tokyo course demands, with a lot of high-end work and not too much volume. I am also doing some heat training, because the racing in Tokyo is going to be incredibly warm and humid!

Which athletes inspire you?

So many athletes inspire me, because I think it’s really impressive to see someone pushing themselves to their limits day in and day out to chase their dreams. If I had to pick a rider in particular, I would say Annemiek van Vleuten, because she is such a powerhouse! Likewise, Anna van der Breggen and Marianne Vos also seem to be really nice people whilst being so impressive on the bike, and I really respect that. When it comes to Aussies, I always looked up to Annette Edmondson as a little kid, and later, once I found out a bit more about the road, Amanda Spratt as well.

What keeps you motivated during difficult times?

I always think back to why I am chasing this dream of being a professional cyclist, and why I love the sport. I started racing my bike because it was fun, and I like to think that I’ve kept racing my bike because it is still fun. Of course, there are tough times, like when you’re in a hospital on the other side of the world and told you have a broken arm and leg, but the highs by far outweigh the lows. Plus the social aspect is so awesome, as is the daily satisfaction of pushing my body and having a passion that excites me so much that everyone around me thinks I’m crazy!

Advice for riders striving for the Olympics?

I would definitely say to just focus on enjoying riding and racing your bike. Sometimes it might be hard, and it is fine to take it seriously and try your very best, but just always make sure that overall, you absolutely love what you do. Try to not focus so much on the outcome, but enjoy the process! Some of my best memories on the bike are sprinting for road signs with friends, attacking my riding buddies up climbs, going for silly little Strava QOMs and getting lost on roads that turn to gravel. I am going to the Olympics, yet I still do all these things quite often! Just do what makes you happy!

If you weren’t a pro rider, what would you be doing now?

If I wasn’t a pro cyclist, I think I’d be trying to turn pro! I love racing so much and at times, I still can’t really believe that it’s my job! If not cycling, I am so competitive that I think I’d have to be in another sport…maybe rowing, because I’ve got awful coordination when it comes to ball-sports and I am pretty terrible at running. I love studying as well though – I’m currently in the middle of my bachelor’s degree – so maybe if I hadn’t jumped into chasing my athletic dreams then I would have considered medicine a bit more. When I was deciding which course to choose after high school, I was already thinking about the impact of night shifts on my sleep and sporting performance!

Probably a hot cross bun or some kind of yummy scroll!

I’m actually a really weird cyclist, especially considering I’m from Melbourne, the apparent home of the world’s best coffee – I don’t like coffee at all! I very rarely stop at coffee shops actually, but if I’m in a group then I prefer that we stop at the end of our ride, not at the start or in the middle, because I always just want to begin or keep riding otherwise! If all my friends are getting coffees then I’ll sometimes buy a hot chocolate, which is especially nice in the winter!

What’s your spirit animal and why?

Hmm I’ve never considered having a spirit animal before, but my gut instinct is telling me to go with the lion. I absolutely love cats, and a lion is just a big cat combined with the traits I want to have – strong, brave and powerful!

One thing you can’t live without on the road?

I couldn’t live without my bike! Every time I go somewhere new, I have such an urge to go exploring and see what the riding is like there. I love my home in Melbourne, but it’s just so inner city, meaning that so far, every time I ride in a new place in Europe, I have felt like I’m in a carless paradise in comparison!